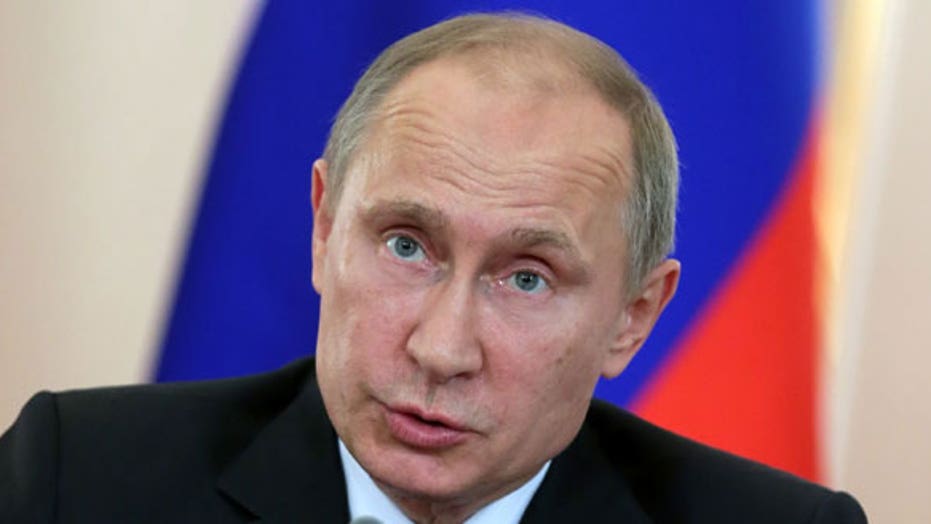 Attorney General Jeff Sessions reportedly had two conversations with Russia's ambassador to the U.S. during last year's presidential campaign, while Sessions was still a senator.

News of the conversations were first reported by The Washington Post. The Wall Street Journal reported that U.S. investigators had examined contacts between Sessions and Russian officials and that the Justice Department was "wringing its hands" about how to proceed in the matter.

The Journal reported that Sessions did not know that his communications were under investigation.

When contacted by Fox News late Wednesday, Sessions said, "I never met with any Russian officials to discuss issues of the campaign. I have no idea what this allegation is about. It is false."

A White House statement said the story was "the latest attack against the Trump Administration by partisan Democrats."

The Justice Department said late Wednesday that one of the discussions between Sessions and Sergey Kislyak was an office visit that occurred in Sessions' capacity as a member of the Senate Armed Services Committee. The second conversation took place in a group setting with other ambassadors following a Heritage Foundation speech.

Reports about the meetings appeared to contradict a statement Sessions made during his confirmation hearing in January.

Sessions was asked by Sen. Al Franken, D-Minn., how he would respond "if there is any evidence that anyone affiliated with the Trump campaign communicated with the Russian government in the course of this campaign."

“I’m not aware of any of those activities,” answered Sessions, one of Trump’s earliest and most prominent supporters during the campaign. “I have been called a surrogate a time or two in that campaign and I did not have communications with the Russians, and I’m unable to comment on it.”

The Justice Department said Wednesday that "there was absolutely nothing misleading about [Sessions'] answer [to Franken]. He was asked during the hearing about communications between Russia and the Trump campaign--not about meetings he took as a senator and a member of the Armed Services Committee."

Sessions had meetings last year with more than 25 foreign ambassadors, the Department said.

The disclosure caused renewed calls for Sessions to step aside from an ongoing FBI investigation into Russian interference in the 2016 presidential election.

In a statement, Franken said he was troubled that Sessions' response to his question was "at best, misleading." He said he planned to press Sessions on his contact with Russia.

"It's clearer than ever now that the attorney general cannot, in good faith, oversee an investigation at the Department of Justice and the FBI of the Trump-Russia connection, and he must recuse himself immediately," Franken said.

Rep. Adam Schiff, D-Calif., the ranking member of the House Select Committee on Intelligence said that if the reports were true, "it is essential that [Sessions] recuse himself from any role in the investigation of Trump campaign ties to the Russians.

House Minority Leader Nancy Pelosi, D-Calif., went a step further and called on Sessions to resign for "lying under oath."

"Sessions is not fit to serve as the top law enforcement officer of our country and must resign," Pelosi said in a statement. "There must be an independent, bipartisan, outside commission to investigate the Trump political, personal and financial connections to the Russians."

Sen. Lindsay Graham, R-S.C., referred to Sessions as "my dear friend" in a CNN town hall Wednesday with Sen. John McCain, R-Ariz., but also noted, "If there’s something there that the FBI believes is criminal in nature, then for sure you need a special prosecutor."

The White House has already acknowledged that Michael Flynn, Trump's former national security adviser, misled top officials about the nature of his contacts with Kislyak. Flynn initially told Vice President Mike Pence and other Trump advisers that he did not discuss sanctions with the envoy during the transition, though it was later revealed that he did.

Fox News' Matthew Dean and the Associated Press contributed to this report.