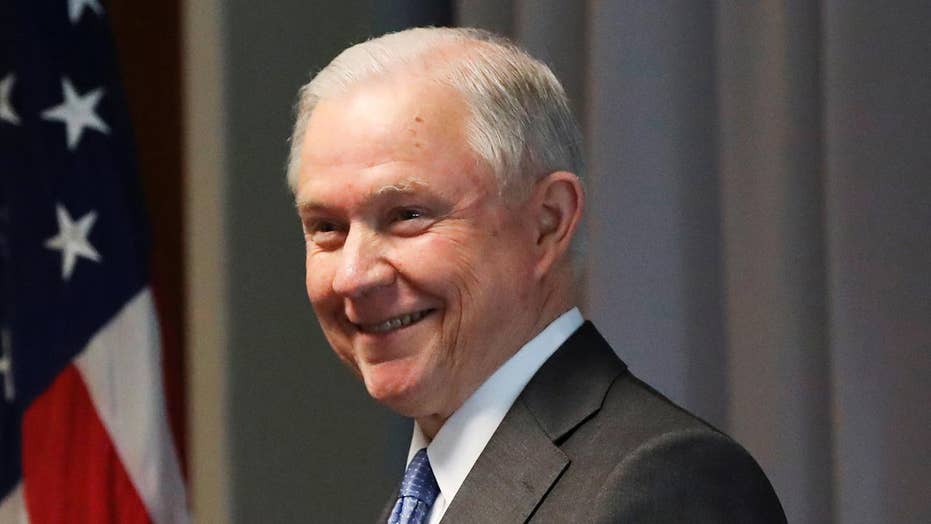 Attorney General Jeff Sessions did not disclose contacts with foreign dignitaries, including the Russian ambassador, on a security clearance form he submitted as a United States senator last year, the Justice Department acknowledged Wednesday.

The department said Sessions' staff relied on the guidance of the FBI investigator handling the background check, who advised that meetings with foreign dignitaries "connected with Senate activities" did not have to be reported on the form.

The news comes just two months after Sessions recused himself from a Justice Department investigation into potential ties between Russia and the Trump campaign after it was revealed that he had two previously undisclosed encounters, last summer and fall, with the Russian ambassador. Sessions said at his Senate confirmation hearing that he had not any communication "with the Russians."

In a statement, Justice Department spokesman Ian Prior said Sessions met with hundreds, if not thousands, of foreign dignitaries while in the Senate. Prior said Sessions' staff consulted with the FBI and others familiar with the disclosure process, and was told not to list those meetings connected to his Senate job.

Also Wednesday, the FBI told a House committee that it would not be complying with a Wednesday deadline to turn over memos written by former FBI Director James Comey detailing his discussions with President Donald Trump. One memo reportedly recounts Trump pressuring Comey to shut down an investigation into the foreign ties of foreign national security adviser Michael Flynn.

Lawmakers conducting their own probe continued to pressure Flynn to cooperate by raising the prospect of additional subpoenas, while Carter Page, a Trump campaign foreign policy adviser, told The Associated Press he would testify next month before the House intelligence committee.

Meanwhile, The New York Times reported that U.S. intelligence services obtained information during the 2016 presidential election that showed senior Russian officials discussing how to influence Trump through his campaign advisers.

The Times said some of the officials bragged about ties to Flynn. Others thought they could use Manafort's association with former Ukrainian President Viktor Yanukovych, who led a pro-Russian political party, to their advantage, the Times reported.

A day earlier, former CIA Director John Brennan told a House committee that he had seen intelligence that "revealed contacts and interactions" between Russian officials and Americans "involved" in the Trump campaign -- a cause for concern in case the Russians could get the Americans to cooperate.

During a breakfast Wednesday, Rep. Adam Schiff, D-Calif., the House intelligence committee's ranking member, told reporters that Flynn declined to turn over records to the committee, and he said it will be "following up with subpoenas." He did not elaborate on what materials the committee was seeking.

The attempts to compel Flynn to produce documents were just another sign of the intense focus on Trump's former national security adviser, who was fired in February after the White House said he misled administration officials, including Vice President Mike Pence, about his contacts with Russian officials.

In addition to the congressional scrutiny, Flynn is currently a target of an FBI counterintelligence investigation, a federal probe in Virginia and a Defense Department inspector general's inquiry into the propriety of foreign payments he accepted.

In a letter to the Senate committee on Monday, Flynn invoked his Fifth Amendment protection from self-incrimination in deflecting the panel's subpoena for a wide array of documents and information related to his contacts with Russians.

Flynn's attorneys argued that the Senate's request was too broad, and if Flynn were to comply, he could be confirming the existence of some documents and, in effect, providing testimony that could be used against him. They also said an "escalating public frenzy" against Flynn and the appointment of a special counsel had created a legally perilous environment for Flynn to provide the information.

In response, the Senate intelligence committee on Tuesday sent a letter narrowing its request for documents. It also issued subpoenas seeking documents from two of Flynn's businesses-- Flynn Intel Group Inc., a consulting firm owned by Flynn and his business partners, and Flynn Intel Group LLC, a company he used for other projects, such as his paid speeches.

Flynn could choose to contest the congressional subpoenas seeking his business records, but legal experts said he would not prevail.

Solomon L. Wisenberg, a Washington defense lawyer who worked as a prosecutor during the Starr investigation of President Bill Clinton, said both of Flynn's corporate structures would likely have to turn over all business records sought by the committee. "The Fifth Amendment privilege does not apply to business entities, period," he said, adding that both Supreme Court and District of Columbia Circuit Court rulings would weigh on the committee's side.

While Flynn decides what, if anything, he'll provide to Congress, the chairman of the House Committee on Oversight and Government Reform said the FBI will not be turning over memos and other materials that detail discussions between Comey and Trump.

Rep. Jason Chaffetz, R-Utah, said in an interview on CNN that the FBI sent his committee a two-sentence email saying that it would not be turning over the materials now that the Justice Department has appointed a special counsel. Former FBI Director Robert Mueller, who was appointed as special counsel, is overseeing an investigation into Russia's meddling in the election and whether there was any collusion with Trump associates.

Chaffetz said he is considering issuing a subpoena for the documents, and he wants a better explanation from the FBI about why it's not turning them over.

Meanwhile, Page said Wednesday that details are still being worked out about his testimony before the House intelligence committee next month. Page said he expects to testify sometime during the week of June 6 and wants at least part of his testimony to be public. ABC News first reported Page's planned testimony.

Page is one of several people associated with Trump's campaign who are under investigation over their ties to Russia. Page has denied any involvement in Russian attempts to influence the election.