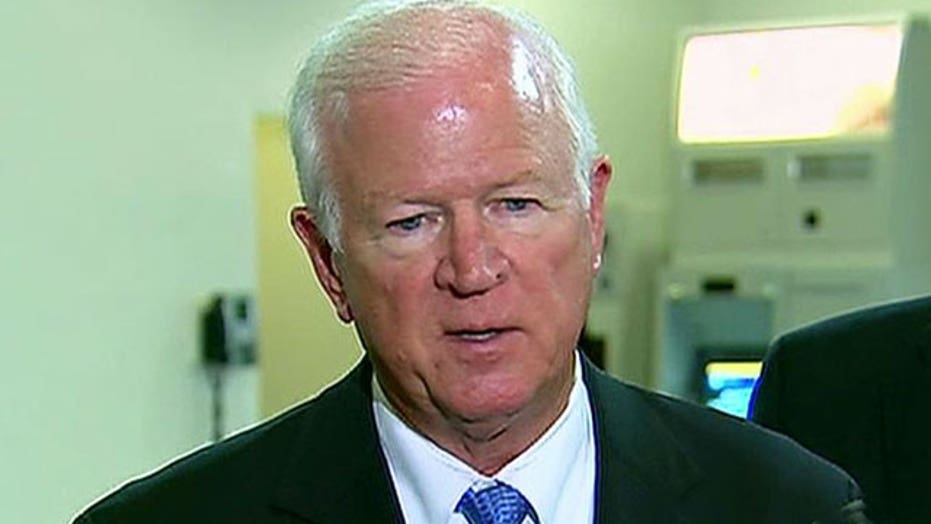 Frustrated senators fumed that they have more questions than answers after listening to a detailed administration briefing on the trade of five Taliban leaders for Sgt. Bowe Bergdahl, with one going so far as to threaten impeachment if President Obama uses this as an opening to shutter Guantanamo.

"If [President Obama] just tried to empty that jail, people would be calling for his impeachment," Sen. Lindsey Graham, R-S.C., said.

Officials from the State Department, Pentagon and intelligence agencies briefed lawmakers late Wednesday in an attempt to ease the mounting criticism surrounding the deal to free Bergdahl, who was held in captivity by the Taliban for five years.

However, many said the briefing did little to quell their concerns, the most pressing of which is that the five traded Taliban leaders could return to the battlefield.

Sen. Mark Kirk, R-Ill., said when asked if the officials thought the five released Gitmo prisoners would attack Americans, they said they did not know.

"But there will be hell to pay if we find they go on to kill Americans," Kirk said.

"I don't see how anybody can walk out of there with any kind of comfortable feeling that the administration from a notification standpoint, and I emphasize that, did what they should have done or what they had the opportunity to do. I mean, it was like they didn't trust Dianne (Feinstein) and me," he told Fox News' Greta Van Susteren on "On the Record."

Lawmakers from both parties have accused the Obama administration of breaking the law by not giving them 30 days' notice of the impending release of the five Taliban militants from Guantanamo Bay in exchange for Bergdahl. Controversy has also arisen over that fact that many service members have claimed that Bergdahl deserted prior to his capture in 2009.

Members of Congress say the prisoner trade almost surely will end with the Taliban commanders returning to the battlefield. House Speaker John Boehner said Tuesday that lawmakers expressed such concerns when they first learned of the possibility of a prisoner swap more than two years ago.

In the briefing, several congressmen said the officials showed them a 1 1/2-minute video provided by the Taliban that proved Bergdahl was alive. They said the footage indicated that Bergdahl's deteriorating health required quick action and that the window to make a deal was rapidly closing, which the administration has previously argued.

Democratic Sen. Dick Durbin of Illinois told Fox News that the officials said the situation unfolded very quickly and it was not an easy call.

"He looked either drugged or sick or tired. But he did not look like a well person," Durbin said.

Officials also gave a detailed description of the steps the administration took in the days leading up to the exchange, according to senators, but Chambliss said it was not enough.

"My comment back to the administration is that I'm not going to believe anything they tell me from now on," he said. "They are willing to violate the law but even short of that, when they commit to us that they are going to give us 30 days' notice and then they don't do it, how in the world can we trust the administration on anything they tell us?"

Kirk agreed that Bergdahl did not "look good," but said he believes the mood toward the deal is turning negative for Obama.

Additionally, Graham, R-S.C., implied the administration floated a "theory" that the exchange would help further peace talks with the Taliban. Graham said he has strong concerns about the logic behind the theory, and it makes him even more disturbed than he was before about the swap.

Defense Secretary Chuck Hagel has agreed to appear at a House Armed Services Committee hearing on June 11 to address lawmakers' questions on the trade.