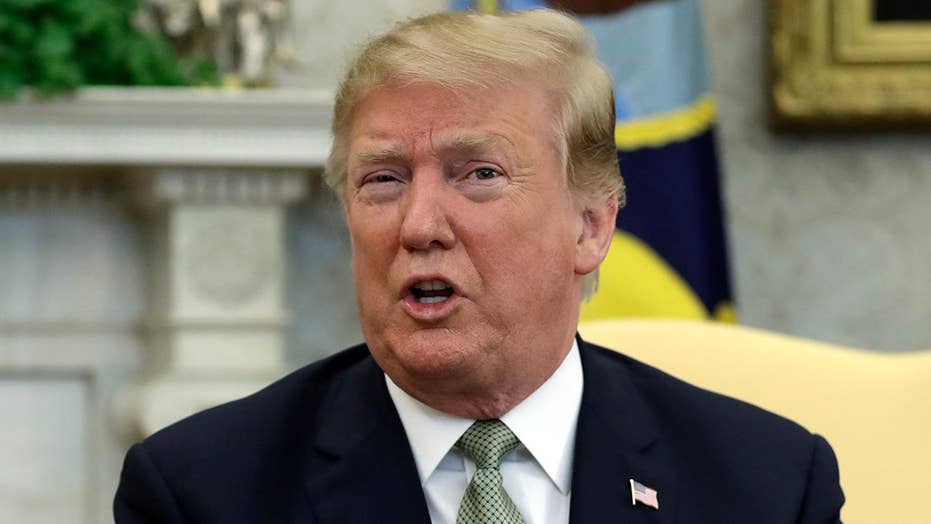 Trump tweets 'veto!' in response to Senate vote to terminate the president's emergency declaration for border.

Senate Republicans joined their Democratic colleagues on Thursday in voting to block President Trump’s border emergency declaration -- a move that will prompt the president's first-ever veto.

The president made his intentions crystal clear, tweeting "VETO!" moments after the resolution cleared Congress. The White House said Trump likely would issue the veto Friday.

The measure passed 59-41 as a dozen Republicans joined Democrats in voting for the resolution, despite White House efforts to keep the GOP united on the issue of border security. Those GOP members who backed the resolution cited concerns about the expansion of presidential powers.

“I’m going to be voting in favor of the resolution of disapproval,” Sen. Mitt Romney, R-Utah, told reporters ahead of the vote. “This is a constitutional question, it’s a question of the balance of power that is core to our constitution.”

SENATE VOTES TO END US SUPPORT FOR SAUDI FOCES IN YEMEN

Senate Minority Leader Chuck Schumer, D-N.Y., before the vote, said he "takes his hat off" to Republicans voting with Democrats, while accusing Trump of "going around Congress" with the declaration.

"This is a momentous day," he said, declaring that the balance of power was shifting back toward Congress.

The measure heads next to Trump's desk, having previously passed the House. However, Trump plans to veto, and it's unlikely the House and Senate could muster the required two-thirds majority to override.

Trump originally issued the emergency declaration last month after Congress granted only a fraction of the $5.7 billion he requested for a wall on the southern border. Declaring a national emergency allows Trump to steer an extra $3.6 billion to the wall.

The run-up to the resolution vote was marked by last-minute efforts to avoid an intra-party confrontation, but those efforts fell through. Vice President Mike Pence, meanwhile, urged Republicans to support the national emergency declaration in an interview airing Thursday morning on “Fox & Friends.”

Trump shrugged off the impending vote when asked about it by reporters in the Oval Office earlier Thursday.

“I don’t know what the vote will be, it doesn’t matter, I’ll probably have to veto,” he said.

Sen. Lee on Tuesday had introduced a bill that would automatically end future emergency declarations after 30 days, a move that might have allowed Republicans to vote against Thursday's resolution.

But after Trump said he opposed Lee’s legislation, Lee said he would back the measure to rebuke Trump on the border emergency. On the Senate floor, he said while he backs Trump's policies on immigration, he could not support the emergency declaration and that Congress needed to take back its powers.

Trump tweeted ahead of the vote that if Congress wanted to amend the law governing emergency declarations in the future, “I will support those efforts” suggesting another last-minute push to keep Republicans on board.

Trump, shortly before the vote, said on Thursday that “a vote for today’s resolution by Republican senators is a vote for Nancy Pelosi, crime and the Open Border Democrats.”