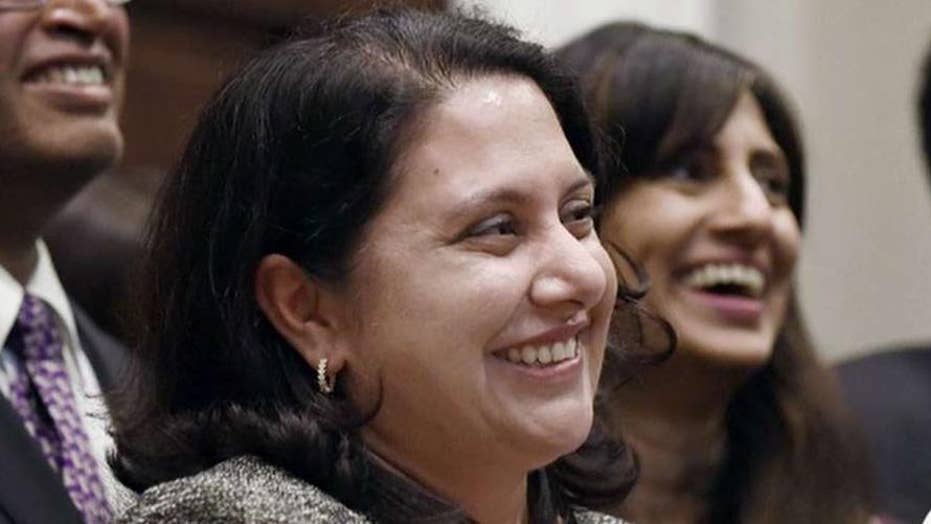 The committee voted 12-10 along party lines – with GOP Sens. Josh Hawley of Missouri and Joni Ernst of Iowa joining their fellow Republican lawmakers – to endorse Rao for a seat on the U.S. Circuit Court of Appeals for the District of Columbia. The seat was vacated when Justice Kavanaugh joined the Supreme Court.

Rao, 45, heads the White House Office of Information and Regulatory Affairs, where she plays a key role in Trump's efforts to roll back federal rules and regulations. She has never tried a case in state or federal court, but previously worked in the George W. Bush White House.

Rao’s confirmation has proved controversial as both Republican and Democratic lawmakers raised concerns about her past writings on issues ranging from LGBT rights and affirmative action to sexual assault and abortion.

Hawley had said he was unsure about Rao's position on abortion, which Hawley opposes. He also questioned her views on judicial activism and other issues.

But he said Thursday that after meeting with Rao he is convinced she would interpret the Constitution "according to its text, structure and history" and not current social mores.

Hawley, a freshman, was criticized by conservative groups and the Wall Street Journal editorial page for raising questions about Rao, but said he will vet all judicial nominees thoroughly, regardless of ideology.

"There are some inside this building and outside of it that would prefer I would do as instructed and go along to get along. That is not going to happen," he said.

Ernst also endorsed Rao, despite concerns about her past writings on sexual assault. Rao suggested in undergraduate articles that intoxicated women were partly responsible for date rape.

The Iowa lawmaker, who recently said she was sexually assaulted as a college student, said Rao's writings "give me pause," in part because of the message they send to young women who may be reluctant to report a rape.

She called Rao's 1990's opinion pieces "absolutely abhorrent and reprehensible at best," but said she was reassured after Rao wrote a letter to senators repudiating her past views. During her confirmation hearing, Rao called rape a "horrible crime" and said anyone who commits rape should be prosecuted. Her comment that women should stay sober to avoid placing themselves at risk was merely "common sense" advice that her own mother gave her, Rao said.

Democrats were staunchly opposed to Rao, citing her lack of experience and publicly stated pride at rolling back federal rules on Trump's behalf. Rao said at her confirmation hearing that she and Trump have successfully pushed deregulation that "gets government out of the way" and helps small businesses and other companies create jobs.

California Sen. Dianne Feinstein, the panel's top Democrat, said Rao has a "troubling and aggressive record" on deregulation, particularly on rules that protect health and the environment. She was especially troubled at Rao's efforts to dismantle a rule to increase fuel economy standards for cars, Feinstein said. The rule is based on a law Feinstein co-authored.