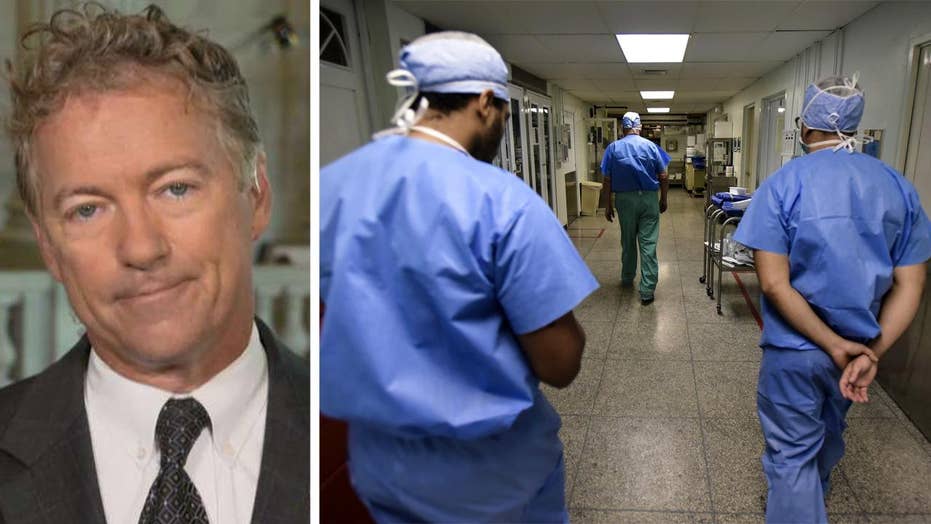 Sen. Rand Paul on where he stands on health care reform

Kentucky GOP Sen. Rand Paul said Tuesday he’ll vote later in the day to advance the chamber’s ObamaCare overhaul bill but again suggested he won’t give final support to legislation that doesn’t have input from him and other conservative senators.

“Nobody in Congress is more for repealing ObamaCare and replacing all of it then me, ” Paul said on “Fox & Friends.” “I’m not for [the bill]. I’ll vote to get the bill out. But I want some assurance that we’ll have a vote on a clean repeal. … I think conservatives have been treated shoddy.”

The Republican-led House has already passed its ObamaCare overhaul measure. But Senate Majority Leader Mitch McConnell has yet to get enough votes in his chamber to even take a preliminary vote like the one scheduled for Tuesday afternoon.

The Kentucky Republican will need support from at least 50 of the chamber’s 52 GOP senators, with Vice President Pence casting a tie-breaking vote. President Trump is pushing the Republican-led Senate to pass an overhaul bill before Congress’ August recess begins next week.

Paul, elected in 2010 in the Tea Party wave, says he and others like Texas GOP Sen. Ted Cruz have offered conservative amendments to lower insurance costs for Americans and cut billions in insurance company subsidies.

However, he argues the text of the overhaul legislation being considered Tuesday has not been reviewed by the Congressional Budget Office, which means those amendments cannot pass without getting 60 votes.

“We haven't gotten zip from leadership,” said Paul, who says he and others also are still not sure whether the bill calls for a full or partial repeal of ObamaCare.

“I have a lot of problems with this process,” he said. “Conservatives are getting nothing.”