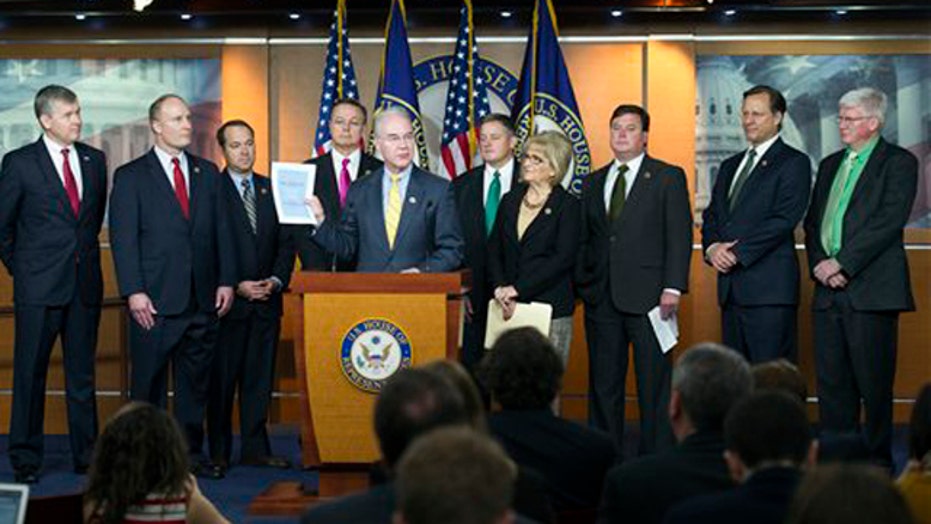 Budget approval in House seen as victory for GOP leaders

WASHINGTON – Republicans muscled a balanced-budget plan through the Senate early Friday, positioning Congress for months of battling President Barack Obama over the GOP's goals of slicing spending and dismantling his health care law.

Working into Friday's pre-dawn hours, senators approved the blueprint by a near party-line 52-46 vote, endorsing a measure that closely follows one the House passed Wednesday. Both budgets embody a conservative vision of shrinking projected federal deficits by more than $5 trillion over the coming decade, mostly by cutting health care and other benefit programs and without raising taxes.

The Senate was beginning a spring recess after approving the measure, leaving Congress' two GOP-run chambers to negotiate a compromise budget in mid-April. The legislation is a non-binding blueprint that does not require Obama's signature but lays the groundwork for future bills that seem destined for veto fights with the president.

"Republicans have shown that the Senate is under new management and delivering on the change and responsible government the American people expect," said Senate Majority Leader Mitch McConnell, R-Ky.

Democrats viewed the document differently, saying it relied on gimmickry and touted the wrong priorities.

"The budget we passed today is irresponsible and fails to effectively invest in our future," said Sen. Barbara Mikulski, D-Md.

The budget's solidly ideological tenor contrasted with a bipartisan bill the House overwhelmingly approved Thursday permanently blocking perennial cuts in physicians' Medicare fees. It too will wait until April for final congressional approval by the Senate, with McConnell saying his chamber will handle it "very quickly when we get back."

Though doctors face a 21 percent cut in Medicare fees April 1, the government can delay processing those payments until Congress' return. The measure, which also provides money for health care programs for children and low-income people, would be partly financed with higher premiums for top-earning Medicare recipients.

On the budget, only two Republicans voted no: Sens. Ted Cruz of Texas and Rand Paul of Kentucky, a pair of presidential hopefuls. Two other potential GOP presidential candidates, Sens. Marco Rubio of Florida and Lindsey Graham of South Carolina, voted yes.

All voting Democrats were opposed.

The Senate completed its budget work after enduring one of its more painful traditions: A multi-hour "vote-a-rama" in which senators repeatedly debate and vote on a pile of non-binding amendments well past midnight. Senators offer the amendments because the votes can demonstrate support for a policy or be used to embarrass opponents in future campaigns.

Those approved included one by Sen. Brian Schatz, D-Hawaii, entitling married same-sex couples to Social Security and veterans' spousal benefits. It got 11 GOP votes, including from several Republicans facing competitive re-elections next year.

Also adopted was one by McConnell aimed at thwarting Obama administration efforts to reduce coal pollution.

Congress' GOP budgets both matched the spending plan that Obama presented last month when it comes to defense, proposing $612 billion for next year, a 4.5 percent boost over current levels. Some conservatives were unhappy because they wanted more of the extra military spending to be offset with savings from elsewhere in the budget.

While his leaves a projected deficit exceeding $600 billion 10 years from now, the Senate plan claims a surplus of $3 billion.

Over the decade, Obama would raise $2 trillion in higher taxes from the wealthy, corporations and smokers while granting tax breaks to low-income and middle-class families. He would boost spending on domestic programs including road construction, preschools and community colleges and veterans.

The Senate budget would cut $4.3 trillion from benefit programs over the next 10 years, including annulling Obama's health care law, a step the president would without doubt veto.

Those savings would include $431 billion from Medicare, matching Obama's figure. The House budget would pare $148 billion from the health care program for the elderly and convert it into a voucher-like program for future beneficiaries, a step the Senate shunned.

The Senate budget would cut $236 billion from the budgets of nondefense agencies. The House would go even further, slicing $759 billion.