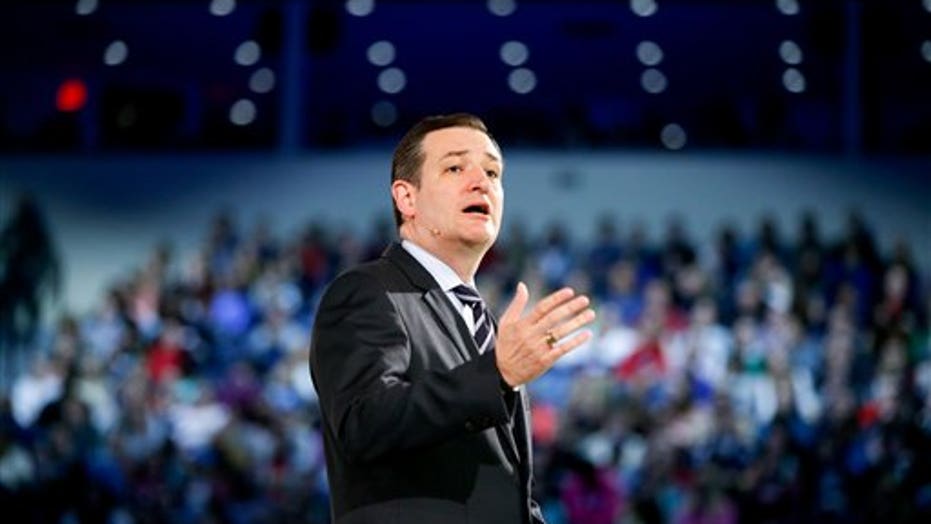 Sen. Ted Cruz kept true to his knack for blazing trails – and generating headlines – while becoming the first major candidate to join the 2016 presidential race.

In a speech at Liberty College, which was founded by the late Rev. Jerry Falwell, the Texas Republican declared that he will devote himself to "reigniting the promise of America."

The choice of Liberty, located in Lynchburg, Virginia, was meant as a marker signalling potential rivals who are also counting on Christian conservatives to fuel their candidacies.

Cruz addressed his religious faith, his father's Cuban roots and his unquestioned conservative credentials, saying "for so many Americans the promise of America seems more and more distant."

He spoke on the fifth anniversary of President Barack Obama's health care law — legislation that prompted Cruz to stand for more than 21 hours in the Senate to denounce it in a marathon speech that delighted his tea party constituency and other foes of the law. Cheers rose in the hall when Cruz reminded the crowd Monday that Liberty University filed a suit against the law right after its enactment.

Cruz, a divisive figure in his own party, is not expected to be the sole GOP contender for long.

"Cruz’s determination to oppose and obstruct any and all attempts to help the middle class is the embodiment of what’s wrong with the Republican Party,” said Rep. Debbie Wasserman Schultz, the chair of the Democratic National Committee. "Ted Cruz clearly could not understand that shutting down the government, so he could deny millions of Americans health care – and costing the economy $24 billion in the process – was not a fight worth having."

"He was then willing to do it over again and threaten our national security in the process.  His reckless approach to governing would make life worse, not better for Americans and he isn’t the type of fighter that America’s middle class families need."

For his announcement, Cruz bypassed Texas, which he represents in the Senate, as well as early nominating states such as New Hampshire, where Mitt Romney kicked off his own campaign for the GOP nomination in 2012, and Iowa.

Benjamin Fernandez, a California financial consultant, ran in the Republican presidential primary in 1980, saying he was the first Latino to do so. He ran again in 1984 and was soundly defeated both times.

Born in a boxcar in Kansas to Mexican immigrants who were farmworkers, Fernandez picked sugar beets as a child before going on to college and becoming a millionaire.

Bill Richardson, the former New Mexico governor who held two senior positions in President Bill Clinton's administration, ran in the 2008 Democratic primary. He gave up his presidential campaign after losses in the early 2008 primaries, and endorsed Barack Obama.

Of the likely 2016 field , the expected presidential contenders who are Hispanic all come from the Republican side.

Rubio, a Cuban-American who is fluent in Spanish, is likely not far behind Cruz with a 2016 announcement expected in early April.

Bush is not of Hispanic descent, of course, but has close Latino familial ties. Bush is married to a Mexican-American woman and is a father to three Latino children. Bush is also fluent in Spanish after studying in Mexico as a youth and living in Venezuela as businessman.

After the 2012 presidential election, the Republican party made a concerned effort to appeal to Hispanic voters after Republican presidential nominee Mitt Romney only attracted 27 percent of Latino votes.

In 2004, the last time a Republican president was elected, George W. Bush won 44 percent of the Hispanic vote during his successful re-election bid.

By getting in early — and at Liberty — Cruz was hoping to claim ownership of the influential and highly vocal corner of the Republican Party for whom cultural issues are supreme. It was a move that hoped to crowd out figures such as former Arkansas Gov. Mike Huckabee, a former Baptist pastor, and former Sen. Rick Santorum, who has made his Catholic faith a cornerstone of his political identity.

Cruz's father, a pastor, is also expected to help the 44-year-old first-term senator make inroads with these voters.

The senator is already a familiar figure on the circuit for presidential hopefuls, having made repeated visits to the early voting states, the big conservative activist conferences and more. This month, for example, he met party activists in New Hampshire, which hosts the first primary. It's just that, like other presidential prospects, he's been coy about what he's doing. That coyness ended Monday.

By announcing what has long been obvious, Cruz triggers a host of accounting and reporting requirements about money he is raising and how he is spending it. To this point, he had operated his political organization through a non-presidential committee that worked under different rules. By officially joining the race, he now operates under a more stringent set of rules, including being able to accept fewer dollars from each supporter.

Following his election to the Senate in 2012, the former Texas solicitor general quickly established himself as an uncompromising conservative willing to take on Democrats and Republicans alike. Criticized by members of his own party at times, he won praise from tea party activists for leading the GOP's push to shut the federal government during an unsuccessful bid to block money for President Barack Obama's health care law.

The son of an American mother and Cuban-born father, Cruz is positioning himself to become potentially the nation's first Hispanic president. While he was born in Canada, two lawyers who represented presidents from both parties at the Supreme Court recently wrote in the Harvard Law Review that they think Cruz meets the constitutional standard to run.

Should he fail to win the nomination or the presidency, Cruz would retain his Senate seat through 2019. He also could opt to run for re-election in 2018, having broadened his national network of allies and donors during this presidential campaign.

Fox News Channel's Serafin Gomez and The Associated Press contributed to this report.