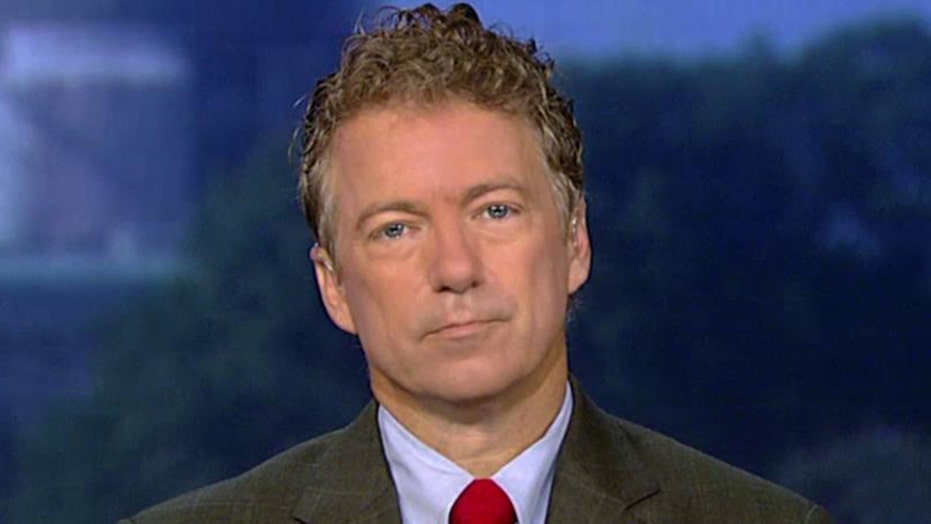 Sen. Paul on Patriot Act filibuster: Americans are with me

Republican on battle against program

Sen. Rand Paul, R-Ky., helped bring the National Security Agency's domestic spying programs to the brink of lapsing Wednesday after holding the Senate floor for nearly 11 hours to protest the proposed renewal of the Patriot Act.

Paul, who is also a candidate for the 2016 Republican presidential nomination, called the law, which expires June 1, an unconstitutional intrusion on Americans' privacy. His speech underscored deep divisions over the NSA's bulk collection of Americans' phone records, which was revealed by former contractor Edward Snowden in June 2013.

The Obama administration warned Wednesday that the NSA's bulk collection of phone records would have to start winding down by the end of the week if Congress does not act, and several programs under the Patriot Act would lapse at the end of the month, when the act itself expires. With Paul's speech eating up hours of floor time and congressional lawmakers still at odds over the way forward, at least a partial lapse is now highly likely.

"There comes a time in the history of nations when fear and complacency allow power to accumulate and liberty and privacy to suffer," Paul said at 1:18 p.m. EDT when he took to the Senate floor. "That time is now, and I will not let the Patriot Act, the most unpatriotic of acts, go unchallenged."

With a hefty binder at his desk, Paul spelled out his objections to the law, which was signed by former President George W. Bush days after the Sept. 11, 2001 attacks. Paul did not yield the floor until 11:49 p.m., having not sat down or left the Senate chamber in the intervening period. Paul kept control by yielding for questions from several of his fellow senators, including fellow Republican presidential candidate Ted Cruz, but not yielding the floor.

Paul's campaign sent out a fundraising appeal while his longstanding opposition to bulk collection, a pillar of his presidential campaign, stirred social media. The next day, Paul was back to work, returning to the chamber Thursday morning to vote against proceeding on a controversial trade measure.

Congress is weighing dueling bills to address the NSA programs.

Last week, the House backed the USA Freedom Act, which would replace bulk collection with a system to search the data held by telephone companies on a case-by-case basis. The vote was 338-88, and House Republican and Democratic leaders have insisted the Senate act on their bill.

The White House also backs the House bill, the result of outrage among Republicans and Democrats after Snowden's revelations, and has pressed for the Senate to approve the legislation and send it to President Barack Obama for his signature.

But Senate Majority Leader Mitch McConnell, R-Ky., and several other top Republicans prefer to simply reauthorize the 2001 law. McConnell has agreed to allow a vote on the House bill, but has indicated there may not be enough votes to pass it in the Senate.

However, after Paul's speech, it is doubtful that the Senate would be able to vote on any bill to renew the NSA programs before Saturday. House leaders insist that the lower chamber will adjourn for its recess at the close of business Thursday, which means that any short-term extension approved by the Senate would have to pass the House as well, ensuring it would not take effect until well after the Patriot Act expires.

As Paul made his case, a Justice Department memo circulated on Capitol Hill warning lawmakers that the NSA will have to begin winding down its bulk collection of Americans' phone records by the end of the week if Congress fails to reauthorize the Patriot Act.

"After May 22, 2015, the National Security Agency will need to begin taking steps to wind down the bulk telephone metadata program in anticipation of a possible sunset in order to ensure that it does not engage in any unauthorized collection or use of the metadata," the department said.

If Congress fails to act, several key provisions of the law would expire, including the bulk collection; a provision allowing so-called roving wiretaps, which the FBI uses for criminals who frequently switch cellphones; and a third that makes it easier to obtain a warrant to target a "lone wolf" terror suspect who has no provable links to a terrorist organization.

The surveillance issue has divided Republicans and Democrats, cutting across party lines and pitting civil libertarians concerned about privacy against more hawkish lawmakers fearful about losing tools to combat terrorism.

The Justice Department also said that if Congress allows the law to expire and then passes legislation to reauthorize it when lawmakers return to Washington the week of June 1, it would "be effective in making the authorities operative again, but may expose the government to some litigation risk in the event of legal challenge."

Although Paul called his action a filibuster, it technically fell short of Senate rules since the bill the Senate was considering was trade, not the Patriot Act. A vote to end debate on the trade bill, which requires 60 votes to pass, has been set for Thursday morning.

Fox News' Chad Pergram and Kara Rowland and the Associated Press contributed to this report.