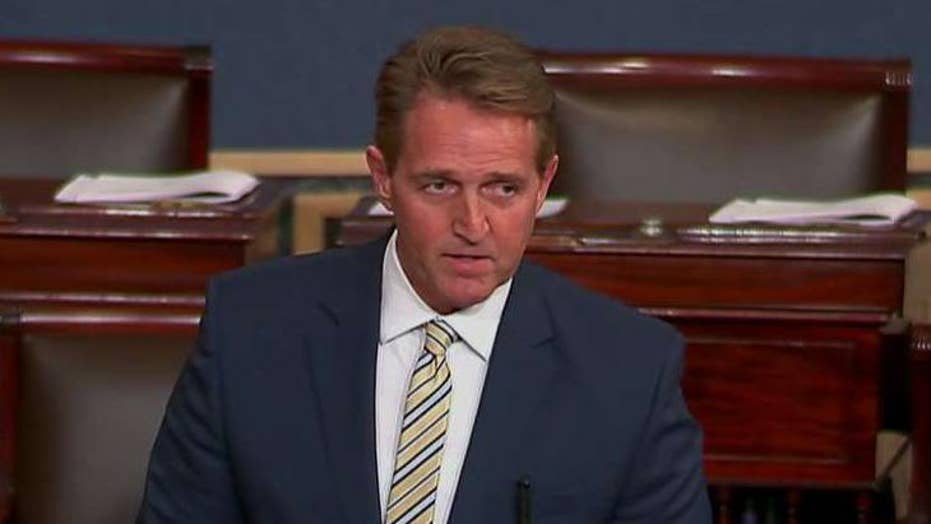 Flake slams Trump: We are not in a fake news era

The Republican gives remarks on the Senate floor on the president's 'attacks' on the truth.

Outgoing Arizona Republican Sen. Jeff Flake came under fire for an astonishing attack on President Trump Wednesday, in which he accused Trump of using Stalinist language and promoting global instability with his criticism of the media.

Flake had taken to the Senate floor Wednesday morning to take aim at President Trump’s plan to award “Fake News awards” to members of the media who he claimed were “biased and corrupt.”

Flake, a longtime Trump opponent, slammed Trump for calling the press the “enemy of the people,” a phrase he said was used by mass-murdering Soviet dictator Joseph Stalin.

“It is a testament to the condition of our democracy that our own president uses words infamously spoken by Joseph Stalin to describe his enemies,” he said.

Flake’s speech, replete with dramatic flourishes, hinted at a dark future for America and warned that “if we compromise the truth for the sake of our politics, we are lost.” He frequently implied that Trump, whom he accused of harboring “pernicious fantasies about rigged elections and voter fraud,” was acting as a kind of despot when attacking the press.

"The free press is the despot’s enemy, which makes the free press the guardian of democracy," he said. "When a figure in power reflexively calls any press that doesn’t suit him “fake news,” it is that person who should be the figure of suspicion, not the press."

He also said Trump was fueling authoritarians in other countries in places such as Syria and the Philippines. 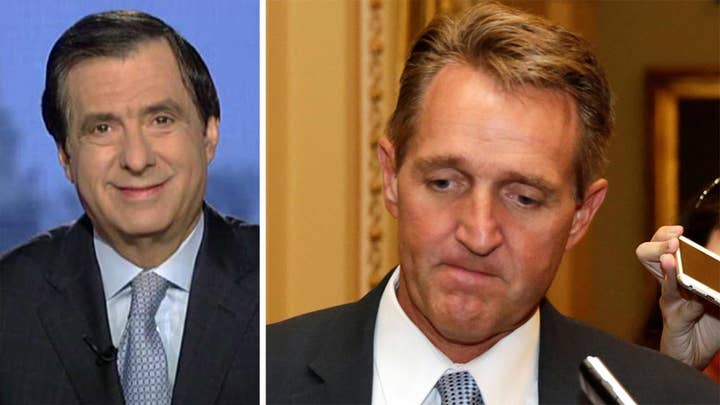 "Not only has the past year seen a president borrow despotic language to refer to the free press, but it seems that he has now in turn inspired authoritarians and dictators with his own language," he said.

White House Press Secretary Sarah Sanders shot back at the daily press briefing that Flake had recently visited Cuba, where he had nice things to say about the authoritarian government in that country.

'It is a testament to the condition of our democracy that our own president uses words infamously spoken by Joseph Stalin to describe his enemies.'

“I found it quite interesting that he is coming out to attack this president considering he's the one who was recently defending an actually oppressive regime. He went to Cuba a few weeks ago and served as a mouthpiece for the oppressive Cuban government.”

She also blamed Flake’s low poll numbers for his attacks on Trump. Flake announced in October that he will not seek re-election in 2018.

Even some critics of President Trump weren’t impressed with Flake’s speech. MSNBC host Joy-Ann Reid dismissed him as just a polite version of a “Trumpist” and asked why he was “fleeing the battlefield.”

Flake was given some support in his remarks by fellow Arizona Sen. John McCain who, in an editorial in The Washington Post, also urged the president to stop attacking the press.

“Whether Trump knows it or not, these efforts are being closely watched by foreign leaders who are already using his words as cover as they silence and shutter one of the key pillars of democracy,” McCain wrote.