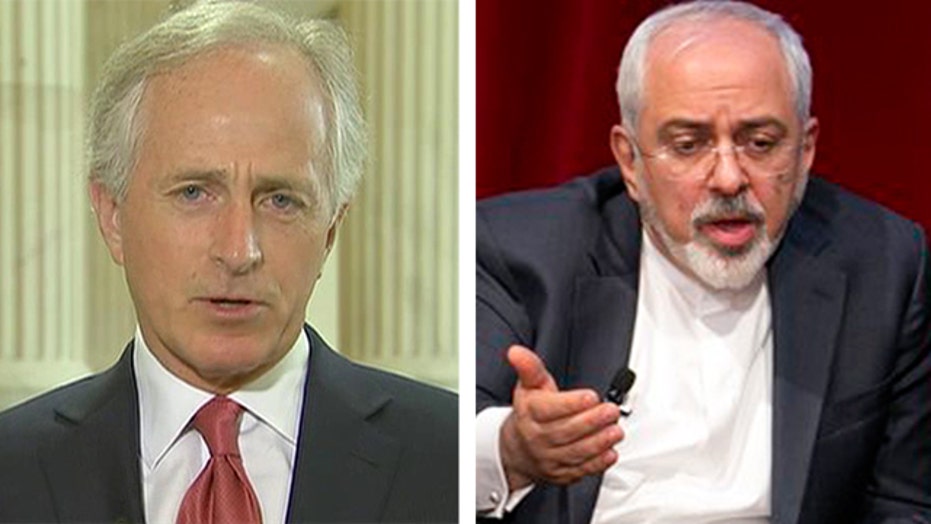 Corker responds to Iran calling out Congress on nuke deal

Sen. Tom Cottton, R-Ark., responded angrily Wednesday to a verbal swipe made by Iranian Foreign Minister Javad Zarif, taking to Twitter to challenge him to a debate.

Cotton was responding to remarks made by Zarif Wednesday at an event at New York University in which he dismissed claims by 47 Republican senators, led by Cotton, that any deal to limit Iran’s uranium-enrichment without a congressional vote could be modified by a future Congress or revoked with “the stroke of a pen” by whoever replaces President Obama in 2017.

“As our understanding stands today… if we have an agreement on 30th of June, within a few days after that, we will have a resolution in the Security Council under Article 41 of Chapter 7 which will be mandatory for all member states, whether Senator Cotton likes it or not,“ Zarif said.

Later Wednesday, Cotton took to Twitter to respond to the foreign minister and to challenge Zarif to debate the U.S. Constitution and what Cotton called "Iran's record of tyranny, treachery & terror."

“Sanctions relief isn’t about what I like, but what will keep America safe from a nuclear-armed Iran," Cotton said. "But I suspect Foreign Minister Zarif is saying what President Obama will not because the President knows such terms would be unacceptable to both Congress and the American people."

"The repeated provocative statements made by members of the Iranian leadership demonstrate why Iran cannot be trusted and why the President’s decision to pursue this deal and grant dangerous concessions to Iran was ill-advised from the beginning," Cotton said.

Zarif, though, responded Thursday on Twitter -- basically telling the senator to cool it, while congratulating him on his newborn.