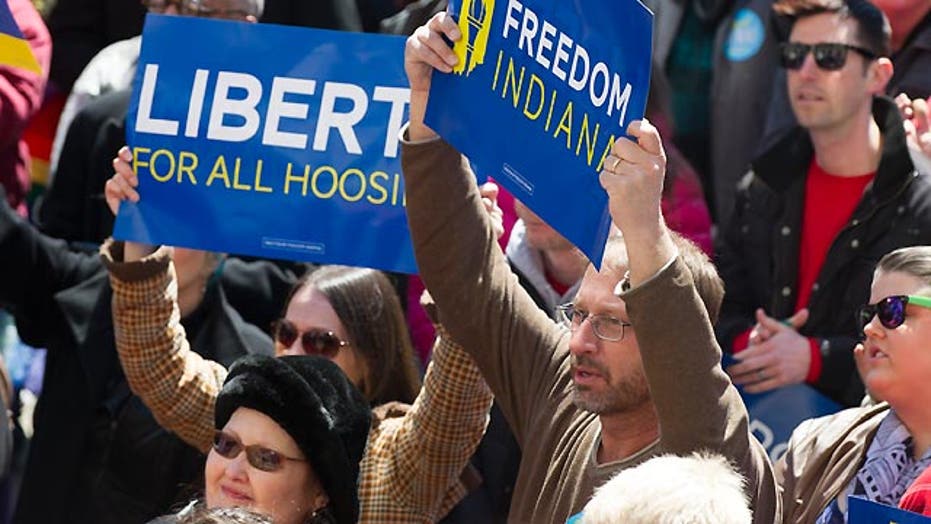 Big-name American companies blasting Indiana over a law they say promotes discrimination based on sexual orientation check their social consciences at the border when it comes to doing business in nations where gay people face persecution and even death for their orientation, say critics.

Companies including Apple, The Gap and Levi’s  - all of which do business in nations with abysmal human rights records - were among the harshest critics of the Hoosier State’s Religious Freedom Restoration Act, which advocates say defends religious freedom and is similar to a federal law and regulations on the books in more than a dozen states. Other companies have even taken the unusual step of banning employees from “non-essential” travel to Indiana over the law, which state lawmakers revised to bar for-profit businesses from refusing to serve the public based on sexual orientation. But the amended version only came after executives behind some of America’s best-known brands came down hard on Indiana.

“Our message, to people around the country and around the world, is this: Apple is open,” Apple CEO Tim Cook wrote in a Washington Post Op-Ed this week. “Open to everyone, regardless of where they come from, what they look like, how they worship or who they love. Regardless of what the law might allow in Indiana or Arkansas, we will never tolerate discrimination.”

“It seems remarkable that he’s doing business in countries that execute gays and lesbians simply for being gay.”

The openly-gay Cook made no reference to the fact that Apple’s website proudly notes its products are sold through authorized dealers in such countries as Iran, Nigeria, Qatar, Saudi Arabia, and the United Arab Emirates, all countries where homosexuality may be punishable by death. That has some critics wondering why the corporate outrage is so narrowly focused on the Midwest.

“It seems remarkable that he’s doing business in countries that execute gays and lesbians simply for being gay,” Ryan Anderson, the William E. Simon Fellow at the Heritage Foundation, told FoxNews.com.

A man walks in front of a shop selling Apple products at a mobile and computer shopping complex in northern Tehran in 2011. (Reuters)

“As Indiana, Arkansas and states around the country enact and consider legislation that perpetuates discrimination, we’re urging state legislatures to stand up for equality by repealing and voting against these discriminatory laws,” the two stated. “These new laws and legislation that allow people and businesses to deny service to people based on their sexual orientation turn back the clock on equality and foster a culture of intolerance.”

Another outspoken opponent of the first draft of the Indiana law was Marc Benioff, CEO of salesforce.com, a San Francisco-based cloud computing company. He took to Twitter to announce that his business would cancel “all programs that require our customers/employees to travel to Indiana to face discrimination.” Benioff even announced the company will try to help employees who live in Indiana and move out of the state.

Critics say Benioff, like Cook, has a selective sense of outrage. Noting salesforce.com has a branch in Beijing, Mollie Hemingway, of The Federalist, cited a recent U.S. Commission on International Religious Freedom report on China, which accused the nation of “particularly severe violations of religious freedom.” Tibetan Buddhists, Uighur Muslims, Catholics, Protestants and practitioners of Falun Gong face imprisonment, torture and even organ harvesting, according to the commission.

“I guess we can at least say Benioff is showing consistency in his dislike of religious liberty,” Hemingway wrote.

When asked if Benioff's social media statements regarding Indiana were at odds with the company's global business practices, salesforce.com officials declined to comment. Officials from Apple and The Gap also declined to comment on how they reconciled their outrage at Indiana's law with doing business in countries that deal harshly with LGBT people.

Conservatives such as Anderson and Hemingway are not the only ones who see a disconnect with American companies haranguing Indiana lawmakers while making millions of dollars in countries ruled by homophobic dictators.

“I certainly think in countries where some of these businesses and corporations are directly doing business — where they are liaising with government leaders and trade authorities — I think there is no question, if this is a cause that they want to support they should speak out at the very minimum,” Suzanne Trimel, communications director for the International Gay & Lesbian Human Rights Commission, told FoxNews.com.

The Gap opened a flagship store in Kingdom Mall, in the Saudi city of Riyadh in 2007. (get2knowsaudiarabia.com)

Trimel said that she would like to see some of these companies speak out on oppressive sanctions and human rights violations against LGBT people in these countries in the same way that they spoke out agains the legislation out of Indiana.

“Many of them could ask within their own workplace (in these countries) for non-discrimination policies,” Trimel said. “They could also reach out to local LGBT communities and activists, and try to seek greater diversity in their workforces on the ground … make it clear that they are not accepting of repressive policies or persecutions, which, as we know, are endemic throughout the ‘Global South.’ ”

The juggling act of advocating for one cause domestically while carrying out business in a different country that supports the exact opposite point of view is particularly difficult for these companies from a public relations standpoint, Cayce Myers, legal research editor for the Institute for Public Relations, told FoxNews.com.

“These companies have to be careful in crafting their image,” Myers said. “First, they have to keep in mind, ‘What is the culture and attitude of the public in this other country?’ and secondly, ‘How do I tailor my organization’s message to comport with that?’ ”

However, Myers suggested that it could be very hard for a large company like Apple to release a statement against another country’s laws.

“It’s very tricky for an American company to do that,” Myers added. “In America, we have an evolving public opinion about LGBT rights. In Saudi Arabia, for example, you don’t have that. I don’t have opinion polls or a statistic for that country, but their political tradition is much more informed by religious views — it comes from a different tradition that is very informed by a religious context.”

Still, Trimel said she would like to see these major American companies do more.

“When they (the companies) sit down with trade representatives they could start talking about these issues,” Trimel said. “They could put them in a position where they really have to listen.”