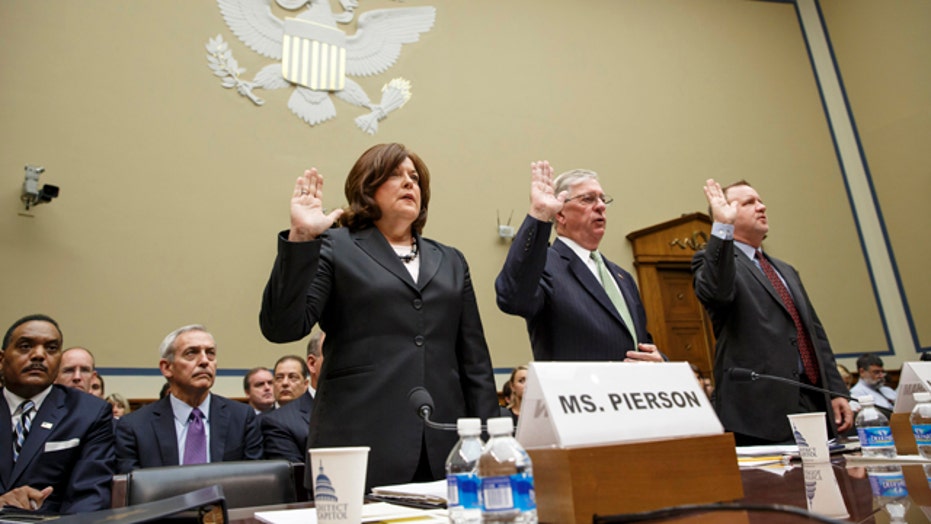 Secret Service Director Julia Pierson is facing bipartisan pressure to consider resigning, on the heels of her Capitol Hill testimony on major security failures that have thrown into doubt the safety of the president and his family.

Rep. Jason Chaffetz, R-Utah, who aggressively questioned Pierson at the House hearing, told Fox News that Pierson should either be fired or resign.

Afterward, the top Democrat on the House oversight committee, Rep. Elijah Cummings, D-Md., appeared to call for the same. He told MSNBC that he did "not feel comfortable with her in that position,” and that his confidence and trust in her had “eroded.”

Asked about Cummings’ remarks, House Democratic Leader Nancy Pelosi concurred: “If Mr. Cummings thinks she should go, I subscribe to his recommendation,” she said.

The Maryland lawmaker, though, later clarified on Twitter that “I have not decided about Pierson, but I'm not comfortable about the safety of the President of the United States of America.”

Nevertheless, Cummings said he would speak Wednesday with Pierson about his concerns.

The comments from him and Pelosi in particular put considerable pressure on Pierson, who only took over last year – appointed to assume the helm of the troubled agency after the 2012 prostitution scandal in Colombia.

On Tuesday, Pierson took responsibility for the highest-profile breach, the Sept. 19 incident where an intruder carrying a knife jumped the White House fence and made it all the way to the East Room of the building before being apprehended.

But she insisted: "The president is safe today.”

The White House has backed her, citing in part her decision to take responsibility.

Asked if the president has confidence in the director, Press Secretary Josh Earnest told reporters “absolutely.”

In a written statement on Wednesday, House Speaker John Boehner said the president "must make a swift determination on whether the agency is being well-served by its current leadership."

Chaffetz called for Pierson to resign after she neglected to mention another security breach that occurred just days before.

On Sept. 16, a security contractor armed with a gun who had previously been arrested for assault rode on an elevator with Obama and his security detail at the Centers for Disease Control and Prevention in Atlanta, violating Secret Service protocol.

“I think it’s time that [Pierson] be fired by the president of the United States or that she resign,” Chaffetz told Fox News.

Pierson on Tuesday had won a vote of low confidence from the lawmakers, who called at that time for additional reviews into the agency's incidents. The chairman of the House committee with oversight responsibilities for the Secret Service called for an independent commission to do a "top-to-bottom" review of the agency.

"I am deeply concerned with the lack of transparency from the Secret Service regarding the recent security breach at the White House," Rep. Michael McCaul, R-Texas, the chairman of the House Homeland Security Committee, said of the Sept. 19 incident. "This latest episode adds to the growing list of failures from an agency plagued by operational challenges, cultural problems and reporting difficulties."

Lawmakers were aghast, too, about a four-day delay in 2011 before the Secret Service realized a man had fired a high-powered rifle at the White House, as reported by the Washington Post on Sunday.

Pierson told the hearing the security plan for protecting the White House was not "properly executed" on Sept. 19 when the intruder sprinted across the White House North Lawn and through the unlocked front door of the mansion, knocking over a Secret Service officer and then running past the staircase that leads to the first family's residential quarters. He ran through the East Room before being tackled by a Secret Service agent near the entrance to the Green Room.

The Secret Service's story about the extent of that breach changed late Monday night after the Post reported that suspect Omar Gonzalez got well past the front door of the White House. Previously it had said Gonzalez had been stopped just inside the front door. After hours of questioning Tuesday, it remained unclear what and when Pierson and Homeland Security Secretary Jeh Johnson knew about the incident. The Secret Service is part of the Homeland Security Department.

Three days after the breach, Johnson described it as "events on the North Lawn of the White House."

No one has been fired or demoted since the Sept. 19 White House intrusion.

Pierson said she was conducting an internal review to determine the facts. Wednesday marks day 12 of that review. Pierson did not say when it was expected to be completed, but said the results would guide any security adjustments and personnel actions "that are necessary to properly ensure the safety and security of the president and first family and the White House."

Gonzalez was indicted Tuesday and was scheduled to appear Wednesday before Magistrate Judge Deborah A. Robinson in U.S. District Court.