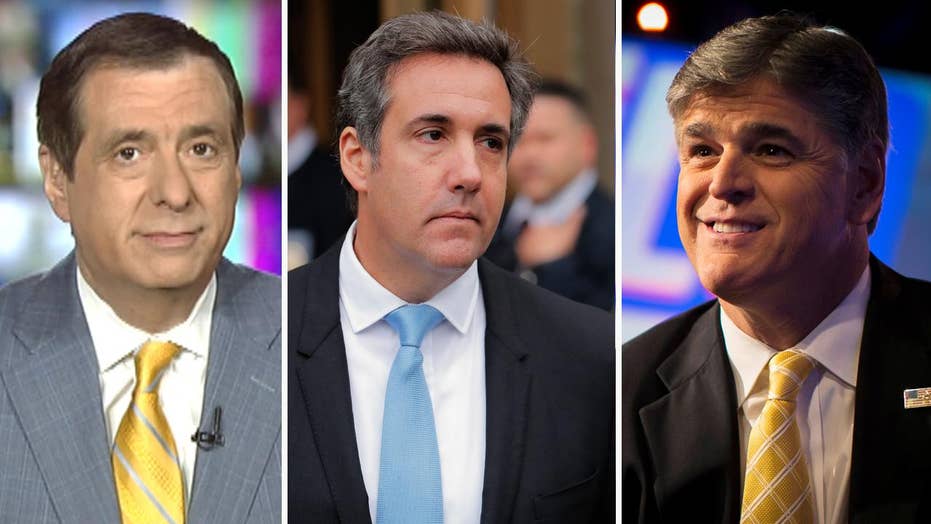 Kurtz: Payback time for the mainstream media and Hannity

I've been watching hours and hours of nonstop coverage about Sean Hannity.

And while what was disclosed in a federal court in Manhattan is clearly newsworthy, many of Fox's competitors have made no effort to hide their glee in slamming the top-rated host in cable news.

Hannity regularly denounces what he calls the "destroy-Trump media" in vehement terms. So for some of his rivals, this is payback.

What emerged in a court proceeding involving Michael Cohen, Trump's personal lawyer, is that one of his clients—whose name he had tried to keep secret—is Hannity.

This was Hannity's initial statement when the news broke Monday afternoon while he was doing his radio show:

"Michael Cohen has never represented me in any matter. I never retained him, received an invoice, or paid legal fees. I have occasionally had brief discussions with him about legal questions about which I wanted his input and perspective."

Hannity later called the media coverage "absolutely apoplectic and hyperventilating." He said his dealings with Cohen were almost exclusively about real estate. He did say "I may have handed him $10 once" and "I requested attorney-client privilege."

Did Fox News know about this? The prime-time host said his relationship with Cohen never rose to the level that he felt he had to inform his bosses.

Here’s the problem: Hannity needed to inform his viewers.

Even if his relationship with Cohen was merely that of a friend who informally provided some legal guidance, Michael Cohen has been very much in the news. He is under investigation in the Mueller probe. He and Trump are embroiled in a lawsuit over Cohen having paid Stormy Daniels $130,000 to keep her quiet near the end of the 2016 campaign.

When the FBI raided Cohen's office and hotel room last week, Hannity took to the airwaves to defend him.

"Keep in mind that Cohen was never part of the Trump administration or the Trump campaign," Hannity said on his show. He declared that "this is now officially an all-hands-on-deck effort to totally malign and, if possible, impeach the president of the United States."

But his viewers didn't know he was talking about a friend who has given him legal advice. That was a mistake.

The network issued a statement Tuesday: "While Fox News was unaware of Sean Hannity's informal relationship with Michael Cohen and was surprised by the announcement in court yesterday, we have reviewed the matter and spoken to Sean and he continues to have our full support."

Alan Dershowitz, the liberal lawyer who has become a Trump defender, challenged the host on Hannity's show Monday night.

"I really think you should have disclosed your relationship with Cohen," Dershowitz told him. Hannity described the relationship as "minimal."

"I understand that, and you should've said that," Dershowitz said. "You were in a tough position because, A, you had to talk about Cohen, and, B, you didn't want the fact that you had spoken with him to be revealed."

Hannity responded that "I have the right to privacy. It was such a minor relationship." Dershowitz stood his ground.

Hannity has talked about his relationship with Cohen in the past. As The New York Times noted, when Cohen appeared on his radio show shortly before the inauguration, Hannity said: "Full disclosure: a personal friend of mine, long before this election ever started."

Had he done that, and mentioned the legal advice, when he started discussing Cohen as the New York lawyer became enmeshed in various Trump controversies, there would have been no issue. Viewers and listeners could factor in the friendship in evaluating Hannity's commentary.

Sean Hannity is a committed conservative and a passionate supporter of Donald Trump. He makes that clear every day. While he deals with news stories on his program, he is paid for his opinions.

Hannity speaks to the president regularly. They have had dinner. They have socialized at Mar-a-Lago. Trump promotes his show on Twitter. So no one who watches "Hannity" at 9 p.m. eastern is under any illusions. This is a commentator who not only fiercely defends Trump but fiercely attacks his antagonists in law enforcement, Congress and the media.

Some of those who castigated or mocked Hannity over the Cohen matter—Rachel Maddow announced she was struggling not to laugh—are fierce anti-Trump partisans who are also paid for their opinions. Maddow, for instance, said immediately after the president announced the airstrikes against Syria that the perception was that he was doing this to distract from domestic scandals—even as American and allied pilots were still risking their lives.

And those with whom Hannity has been feuding, such as Jimmy Kimmel, had a field day. Stephen Colbert reclined on a chair and sipped a glass of wine.

Some competitors want to make Hannity the face of Fox and ignore that the network has a thriving news division—one that, to take a recent example, produced Ed Henry's aggressive interview with EPA chief Scott Pruitt.

Certain pundits even offered baseless speculation that since Cohen was involved in payments to Stormy Daniels and a former Playboy model impregnated by a top RNC official, maybe he had provided similar services to Hannity. That was reckless and irresponsible.

Sometimes people in journalism, on the news or opinion side, find themselves covering folks with whom they have had friendships or professional dealings. If the relationship is serious enough, it may require recusal. If not, the best course is being transparent and disclosing it.

Hannity doesn't believe his friendship with Cohen rose to that level. But by making that choice, he gave his detractors ample ammunition against him.