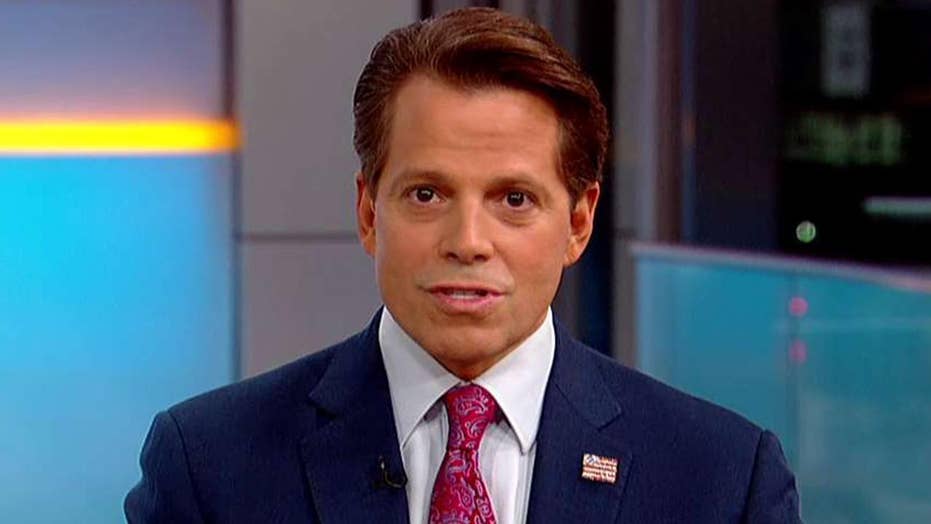 Anthony Scaramucci served just 10 tumultuous days as White House communications director, but that and his months with candidate-turned-President Donald Trump gave him a unique window into a world now visible through his new book “Trump, The Blue Collar President.”

“I was so myopically focused on trying to get my piece of the American dream, that it took a billionaire living in the Trump Tower, adjacent to Tiffany’s on Fifth Avenue, to show me what was going on in my own neighborhood,” Scaramucci told Fox News, in an interview before the book's release on Tuesday. “So it serves as a cautionary tale to the establishment to go meet some common people - because those people vote.”

The book details how Trump portrayed himself as the brash-speaking advocate of the blue-collar American patriot from the very start of his campaign, and presents a perspective of the “genius” of the Trump political victory in both blue and red states across Middle America. And perhaps more quietly, it explains how Scaramucci’s own cohorts on Wall Street were also won over.

“Wall Street is a social club and the President affronts them with his personality,” Scaramucci said. “So publicly they snicker, but privately they whisper he is doing a great job.”

Among other excerpts of the book, previewed by Fox News:

On intial skepticism about Trump's presidential run: "The following day, February 17, 2015, I was in Mr. Trump’s office on the 26th floor of Trump Tower in Manhattan. He was sitting behind his desk, that same spectacular view of Central Park behind him, all the newspapers and magazines spread out in front of him. By then, Mr. Trump had starred on The Apprentice and Celebrity Apprentice for fourteen seasons. The show was still going strong, with no end in sight. I didn’t have any reason to think he wanted to do anything else. Why would he? The show was a brand machine.

'I’m running for President,' he said to me matter-of-factly, as if we were out to dinner, and had decided on the veal scaloppini.

'I know, I know. But it’s because people are just like you, Anthony. They don’t think I’m running for president.'”

I shook his hand and told him we had a deal. As I stepped out of Trump Tower onto Fifth Avenue that morning, I thought my chances of working for Donald Trump were about as good as my chances of playing shortstop for the New York Yankees. Not for one second did I think he would outlast Scott Walker, never mind Jeb Bush, who had more money and Washington influence behind him than almost any candidate who’d ever run for the top office. Hell, I still wasn’t convinced he was actually going to leave The Apprentice.

Looking back, it was then that it began to dawn on me. Donald J. Trump wasn’t the extreme, unhinged, unserious candidate that I thought he was. He knew exactly how the system operated, and he knew how to work it to the advantage of the American people. He knew that the classic Republican tax plan would be good for the country, but he also knew that it was boring as sin, and that a robotic, establishment candidate couldn’t sell it. Scott Walker and Jeb Bush were great, but not great enough to get anyone excited about taxes."

On "Sloppy Steve" Bannon: "My phone rang and I saw it was Bannon again. This time I picked up.

'You have zero chance of being the White House Communications Director,' he said. 'Zero.'

The guy had some set of stones. No hello. No 'how 'ya doing.' No 'how're the kids?' He goes right for the throat.

Like Priebus, Steve Bannon too had gone through a metamorphosis. He’d started to change during the transition. During the campaign, he was fun to work with. He’s smart, extremely well read, and a great storyteller. But telling stories was his fundamental flaw. We used to say he had diarrhea of the mouth.

For all of his anti-press bluster, he loved talking to the reporters, giving them juicy bits here and there, always being sure that information made him look important. Leaking during the campaign is bad enough, but when your candidate had been elected the president of the United States, it impacts national security. Without the regrettable language, what I said about Bannon in July of 2017 was true. The president repeated it almost exactly in a formal White House statement in January 2018 when he fired him.

After the inauguration, Bannon began to feed the press on a daily basis, and started to believe his own notices. His tale was megalomaniacal, that suggested Donald Trump was his hand puppet. Do you think Joshua Green, writer of Devil’s Bargain, came up with that little analogy on his own? It was as though he was borderline delusional, and I’m not saying that in the heat of some late night phone call. His was a power dream fantasy.

I told Bannon that I would meet him in forty-five minutes. In the White House Chief of Staff’s corner office in the West Wing, Bannon was still coming at me hard. 'Why are you going around our backs?' he said. 'You don’t know how to navigate what we’re up against. You’ve never done this, blah, blah, blah.' While Bannon was firing at me with both barrels, his face flushed, his eyes rheumy red, Reince was white as a ghost. He knew that once the president had named me comms director, he could start looking for a summer cabin in Wisconsin. They had only one hope, and it was a long shot. They needed to change the president’s mind."

On Trump's view of age and deference: “I always called him “Mr. Trump” and he appreciated that. Donald Trump is an ageist. By that, I mean that he believes seniority has its privileges. He’ll take bullshit from Carl Icahn. He’s ten years older, and he’s worth billions of dollars. He’ll talk laterally to Steve Schwartzman; he’s in his peer group. But if you’re Steve Mnuchin or Anthony Scaramucci, or anyone else who’s younger than him, you had better be deferential.”

On first meeting and fundraising for Barack Obama: "A few minutes in, I got the chance to shake his hand and talk with him one-on-one. I mentioned that I was about to write him a pretty big check, and that some of my friends thought it was a kind of a big deal that I had gone to school with someone who might be president. We talked about standard political stuff for a while and touched briefly on the long campaign he had ahead of him. Finally, I said, 'Look, I know we weren’t all that close in law school, but if I write this check, could I tell people we were really good friends?'

'Sure,” he said. 'And if you double the size of the check, we can take it all the way back to Hawaii!'"

On his White House colleagues: "I recognize now that the bitterness comes from my direct experience working with such dishonest and unscrupulous people like Priebus, Bannon, and Spicer… Even those fortunate ones, the ones who can somehow sidestep the politics of personal destruction in Washington (the few, the proud), will tell you that the atmosphere in the town is like Beijing’s on an overcast day. The place is toxic.

Don’t get me wrong. Most of the people I met while working in Donald Trump’s White House were good people with whom I got along with great, people like Kellyanne Conway, President Trump’s chief economic advisor, Gary Cohn, Ivanka and Jared, Hope Hicks, the Twitter guy, Dan Scavino, Steve Mnuchin, and special assistant to the president, Johnny McEntee. All of the people who were with Donald Trump from the beginning considered it an honor to serve their country and were in it for the same reason as the president — to help the American people. Unfortunately, far too many people in Washington don’t feel the same way. These are the Swamp Monsters or Swamp Monsters-in-training, and they could care less about the American people. All these creatures care about is themselves, and they would take down anyone who got in the way of what they want.

Almost immediately after my arrival in Washington, two of them had me in their scaly sights."