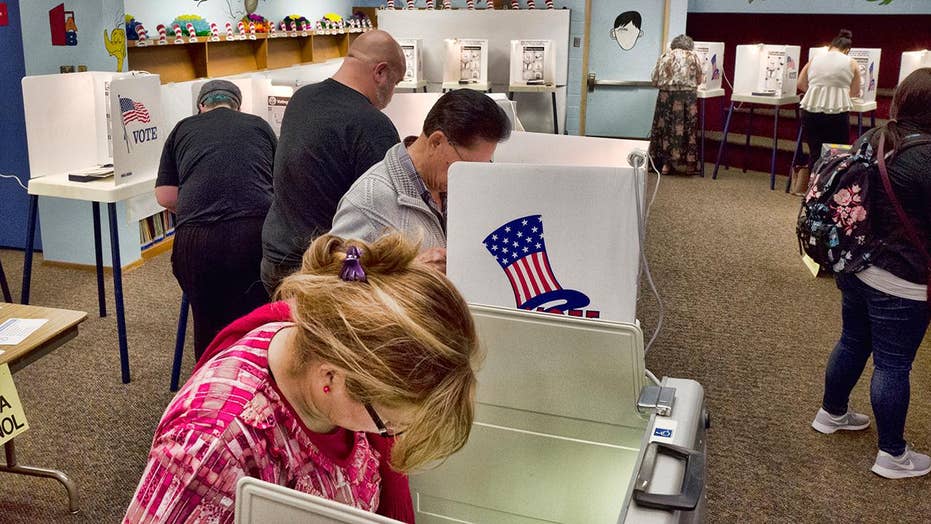 Make or break primary day for Democrats ahead of midterms

Biggest primary day of the 2018 midterm season, with control of the House hanging in the balance; Peter Doocy reports from San Diego, California.

New Jersey Democratic Sen. Bob Menendez, who avoided conviction in a corruption and bribery case last year but was "severely" admonished by the Senate Ethics Committee, survived a challenge from a fellow Democrat and won his party’s nomination for another term as senator, as eight states across the country held primary contests Tuesday.

On a busy night of elections, voting also took place in Alabama, Mississippi, New Mexico, South Dakota, Iowa and Montana. But the most consequential races Tuesday were the House battles playing out in California, with control of Congress at stake.

In New Jersey, former pharmaceutical executive Bob Hugin won the Republican nomination to face Menendez in November. Menendez’s corruption and bribery case – where he was accused of accepting a plethora of donations and gifts from a wealthy friend in exchange for political influence – is expected to play a starring role in the general election, with Republicans calling him "Bribin’ Bob."

The Democratic Senate primary in Mississippi is headed for a runoff, as neither candidates David Baria or Howard Sherman received more than 50 percent of the vote.

In Alabama, Republican Gov. Kay Ivey avoided a runoff, as she beat back challenges from several three GOP opponents. Ivey, who was the state’s lieutenant governor, became governor last year after then-Republican Gov. Robert Bentley resigned over an extramarital affair he had with a staffer. Walt Maddox won the Democratic gubernatorial primary.

In one closely-watched House race in Alabama, Rep. Martha Roby, one of a handful of Alabama Republicans who criticized Trump during his presidential campaign, was forced into a July runoff for the GOP nomination for her seat. Roby will face Bobby Bright, a former Democratic congressman, in the runoff in the state's 2nd congressional district, a conservative swath where loyalty to Trump became a central issue of the midterm primary.

In New Mexico, Michelle Lujan Grisham won the state's Democratic gubernatorial primary. Grisham will run in the general election against Rep. Steve Pearce, who was unopposed in Tuesday's Republican primary.

5 PRIMARY RACES TO WATCH TUESDAY THAT AREN'T IN CALIFORNIA

How does California's 'jungle primary' work?

In South Dakota, Rep. Kristi Noem defeated state Attorney General Marty Jackley in the state's Republican gubernatorial primary. Noem will advance to the general election in November, when she will face off against Billie Sutton, who was unopposed in the Democratic primary.

In Montana, State Auditor Matthew Rosendale has won the Republican nomination for U.S. Senate in the race to challenge Democratic incumbent Jon Tester in November. Rosendale defeated three other candidates in Tuesday's GOP primary. The 57-year-old has support from deep-pocketed Republican donors who want to deny Tester a third term.

The race between Rosendale and Tester will be under a spotlight. President Donald Trump vowed to make Tester pay for sinking his nominee to lead the U.S. Department of Veterans Affairs.

Democrats need to flip 23 GOP-held seats to wrest the House majority from Republicans this fall.

In California, Tuesday's primaries were seen as a big test of the Democratic Party’s plan to regain control of the House.

From New Jersey and South Dakota to Montana, a look at notable primary competitions that you should know about.

The big question facing Democrats in California was whether their candidates’ enthusiasm could backfire. So many Democratic contenders have jumped into key races – largely running on an anti-Trump platform – that the overload threatens to split the vote and boost Republicans. Because of the state's unique election laws, results from some of the races may take days or weeks to finalize.

California’s “jungle primary” is set up to advance the top-two finishers to the general election regardless of party.

Republican Rep. Mimi Walters easily advanced to the November election in her Orange County district that has been targeted by Democrats. The second spot remained up for grabs early Wednesday.

In California's 48th district, which includes Newport Beach and Laguna Beach, Democrats face a potential scenario where two Republicans – and no Democrats – advance to November.

The seat is currently represented by GOP Rep. Dana Rohrabacher, who’s faced criticism over Russia-friendly rhetoric. But if Democrats split the vote too many ways on Tuesday, Republicans could grab the first and second ballot spots under the “jungle primary” system.

Over in California’s 49th district, Democrats see another opportunity in the seat soon to be vacated by retiring GOP Rep. Darrell Issa. They are also eyeing the seat of outgoing Republican Rep. Ed Royce, the chairman of the House Foreign Relations Committee, who has represented the state’s 39th district.

As for statewide races, Lt. Gov. Gavin Newsom, a liberal Democrat, will take one of the two top spots in California's gubernatorial primary, Fox News can project. He will face Republican businessman John Cox, who surged in the polls after an endorsement from the president. Newsom is widely expected to prevail against the GOP challenger in November.

Longtime incumbent Sen. Dianne Feinstein, D-Calif., will finish first in the state’s Senate race despite her failure to secure the California Democratic Party’s endorsement in February, Fox News can project. The fight for the second spot on the ballot is between the more liberal Democratic state Sen. Kevin de Leon and Republican James P. Bradley, among others.

Fox News’ Peter Doocy in California, Kaitlyn Schallhorn and The Associated Press contributed to this report.