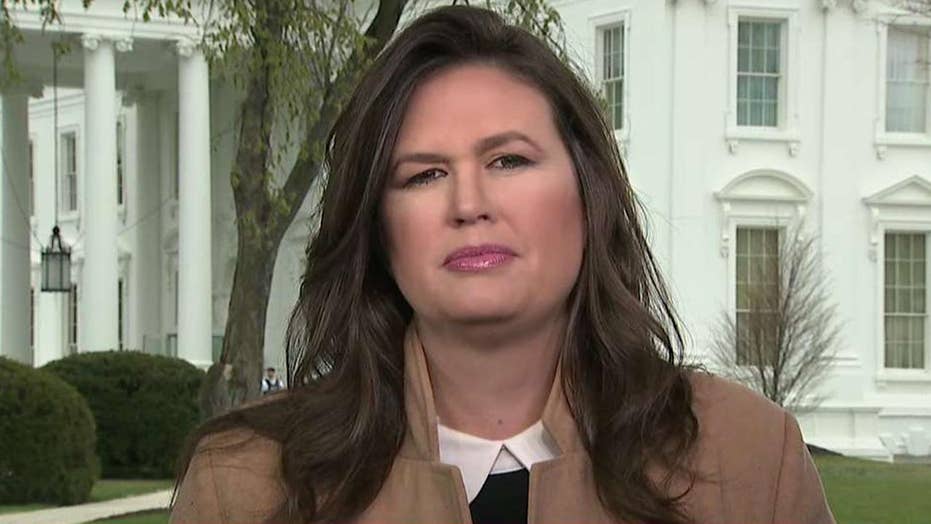 White House Press Secretary Sarah Sanders said Tuesday that President Trump's primary focus is on the safety of the American people, and that Democrats are "too busy playing politics instead of doing their jobs."

In addressing  the president's remarks about the possibility of shutting down the southern border with Mexico, Sanders argued that even former President Obama's Department of Homeland Security Secretary agreed last week that there is a "crisis" at the border, and pointed to more widespread acceptance of President Trump's declarations.

"We're glad that others and Democrats and people in the mainstream media are starting to understand the crisis that the president has been talking about for the last two years," she said on "America's Newsroom."

As for the strict measures the president is proposing for the border, she added, "Democrats in Congress are leaving us no choice. They're unwilling to work with us to fix this problem because they're too busy playing politics to do their jobs."

Among renewed concerns about how closing the border would negatively impact jobs and the national GDP, Sanders said that Mexico has been cooperating more in recent weeks by participating in the illegal immigration process, stopping people from crossing and offering asylum on their side of the border.

"The president's number one responsibility is to protect American life," Sanders said. "Democrats may not care about that, they may be perfectly fine watching women and children exploited as they make the treacherous journey up from the south across the southern border."

Another topic she addressed was the subpoena expected from Democrats to obtain the full, unredacted Mueller report. Sanders' response was that Democrats are only attempting to get the full report because Attorney General William Barr's summary wasn't as critical of President Trump as they expected.

"It just shows what sore losers Democrats really are," she said. "They went out and lied about what they expected the Mueller report to tell America, and they got it wrong."

In addition, Sanders also addressed President Trump's attempt to repeal the Affordable Care Act, a vote that he recently postponed until 2020, after the presidential election. Sanders argued that a vote could not take place now because Democrats are "controlled by the far radical left wing of their party," and want to pioneer a "government takeover" of health care that tells Americans what they can and can't do with their bodies.

Despite a nationwide crisis over the skyrocketing price of insulin, Sanders also argued that President Trump has succeeded in lowering the price of pharmaceutical drugs.

The press secretary added that Dems are going to have to meet the Trump administration and work together to reach any real solutions.

"If Democrats change their minds and want to get serious about fixing problems instead of playing politics, we're here and we're ready to work with them to fix the broken system," she said.