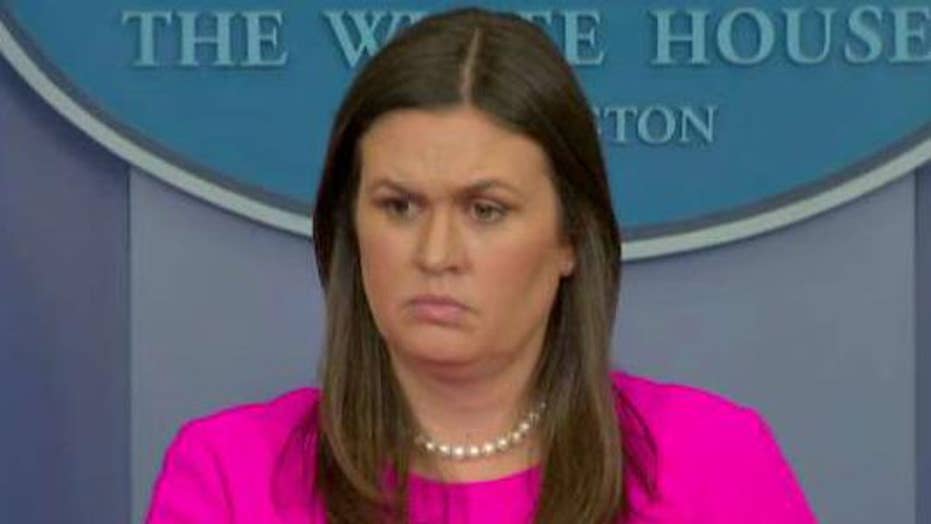 White House press secretary talks about getting kicked out of a restaurant because she works for Trump.

White House Press Secretary Sarah Sanders said Monday that recent "calls for harassment and push[es] for any Trump supporter to avoid the public is unacceptable" after she was kicked out of a Virginia restaurant over the weekend.

Sanders referenced the incident at the top of Monday's White House briefing, as well as remarks by Democratic Rep. Maxine Waters in which she called for protesters to confront Cabinet members publicly to shame them over the Trump administration's policies.

"We are allowed to disagree, but we should be able to do so freely and without fear of harm, and this goes for all people, regardless of politics," said Sanders, who went on to decry threats that have been made against the restaurant and its staff as well as recent tweets by actor Peter Fonda.

"Healthy debate on ideas and political philosophy is important," the press secretary said. "But the calls for harassment and push for any Trump supporter to avoid the public is unacceptable. America is a great country and our ability to find solutions despite those disagreements is what makes us unique."

Sanders struck a more conciliatory tone than President Trump himself, who tweeted earlier Monday that Waters was an "an extraordinarily low IQ person" who had "called for harm to supporters, of which there are many, of the Make America Great Again movement."

"Be careful what you wish for Max!" Trump concluded.

The president attempted to link Waters with House Democratic Leader Nancy Pelosi, though the latter distanced herself from Waters' remarks Monday morning.

"In the crucial months ahead, we must strive to make America beautiful again, Pelosi, D-Calif., wrote on Twitter. "Trump's daily lack of civility has provoked responses that are predictable but unacceptable. As we go forward, we must conduct elections in a way that achieves unity from sea to shining sea."

Waters' remarks also were rebuked by Senate Democratic Leader Chuck Schumer, who said Monday afternoon that "no one should call for the harassment of political opponents. That's not right, that's not American."

Trump also lashed out at The Red Hen restaurant in Lexington, Va., the owner of which asked Sanders to leave Friday while she was dining with her family.

"The Red Hen Restaurant should focus more on cleaning its filthy canopies, doors and windows (badly needs a paint job) rather than refusing to serve a fine person like Sarah Huckabee Sanders," Trump tweeted. "I always had a rule, if a restaurant is dirty on the outside, it is dirty on the inside!"

Sanders' ejection marked the latest incident in which Trump administration officials were accosted by political opponents.

Earlier last week, Homeland Security Secretary Kirstjen Nielsen was confronted at a Mexican restaurant by left-wing activists protesting family separations. Trump policy adviser Stephen Miller was accosted by someone at a different Mexican restaurant who called him "a fascist," according to the New York Post.