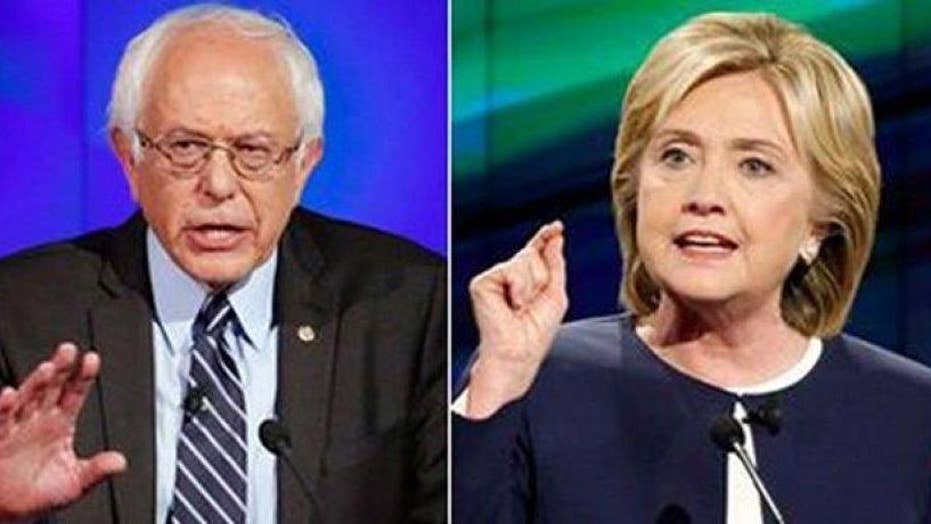 Democratic presidential front-runner Hillary Clinton appears eager to finish her battle with primary rival Sen. Bernie Sanders -- but continues to benefit from his enduring campaign that keeps at least part of the national spotlight on her, and not Donald Trump.

After winning the Arizona primary Tuesday, just hours after the deadly Brussels terror bombings, Clinton made only an oblique reference to her “esteemed rival,” despite Sanders winning two of three races that night.

The former secretary of state instead ripped into Trump and fellow GOP White House candidate Texas Sen. Ted Cruz for their campaign rhetoric and post-Brussels remarks -- including Trump’s suggestions about using torture techniques to interrogate terror suspects and Cruz’s call for more policing of Muslim neighborhoods.

“The last thing we need are leaders who incite fear,” Clinton said at a rally outside of Seattle. “What Donald Trump, Ted Cruz and others are suggesting is not only wrong, it’s dangerous.”

Yet even as Clinton moves to push past Sanders and build her delegate lead, Sanders arguably is playing a useful role for her campaign.

The still-competitive Democratic primary keeps Clinton in the headlines, in a cycle otherwise dominated by Trump's battle with fellow Republicans. Sanders also provides a useful foil for Clinton, allowing her to showcase her foreign policy credentials while contrasting Sanders as soft in an increasingly “complex and dangerous world.” In a sense, his campaign completes hers.

In the aftermath of the Brussels terror attacks, Sanders was fighting to demonstrate the same resolve as Clinton on confronting terror.

“We will crush and destroy ISIS, [but] we will destroy ISIS through a coalition,” Sanders said in California, ahead of the state’s June primary.

But Sanders generally is less hawkish than Clinton. He calls for the “relentless” pursuit of terrorists, but only as part of an international coalition, not as “policeman of the world.”

Sanders, a self-proclaimed Democratic socialist, has focused instead on appealing to voters on the issues of economic and social equality.

The campaign insists, though, that they're in it to win it -- while acknowledging a drawn-out contest could help either candidate.

Sanders senior strategist Tad Devine on Wednesday told FoxNew.com, "We’re not staying in the race to tune up Hillary Clinton. We think we have a path to victory but a hard one. And we think we can win. Whether that’s good or bad for Hillary Clinton depends on how she does.”

Devine, who was a senior adviser to Al Gore's 2000 and John Kerry's 2004 Democratic presidential campaigns, said the conventional wisdom holds that the best way to get to the general election is to quickly vanquish primary rivals.

However, he argues that history proves otherwise, particularly Clinton staying in the 2008 race against eventual winner Barack Obama. “That’s the single best case study,” Devine said. “Clinton could use this same opportunity. But she’ll have to do well. We’ll see who wins.”

Sanders gave every public indication that he remains in the race to win, saying he does better against Trump than Clinton "in every national poll."

Sanders’ victories, of course, also have the effect of highlighting Clinton's polling problems. After Sanders won the Utah and Idaho caucuses Tuesday, Republican National Committee Chairman Reince Priebus said the results “prove a significant segment of Democrat primary voters are desperate for anyone but Hillary Clinton.”

Clinton over the past several weeks has undercut Sanders' momentum dating back to his New Hampshire win. She pocketed seven victories on Super Tuesday and swept last week's Super Tuesday II contests. Still, Sanders kept his campaign alive with an upset win in Michigan earlier this month, and two more caucus victories on Tuesday.

Clinton again tried to project a presidential image on security, while delivering a speech on counterterrorism in Stanford, Calif., on Wednesday. She said the country needs "strong, smart, steady leadership."

But Sanders has used one issue in particular to challenge Clinton's argument about her foreign policy judgment and readiness -- her 2002 vote for use of force in Iraq, which he opposed.

He has repeatedly revisited the issue in debates and on the campaign trail, pointing out that the U.S.-led intervention led to further Middle East destabilization and chaos.

“The war in Iraq was one of worst foreign policy mistakes in U.S. history,” Sanders said Tuesday. “I voted against that war.”