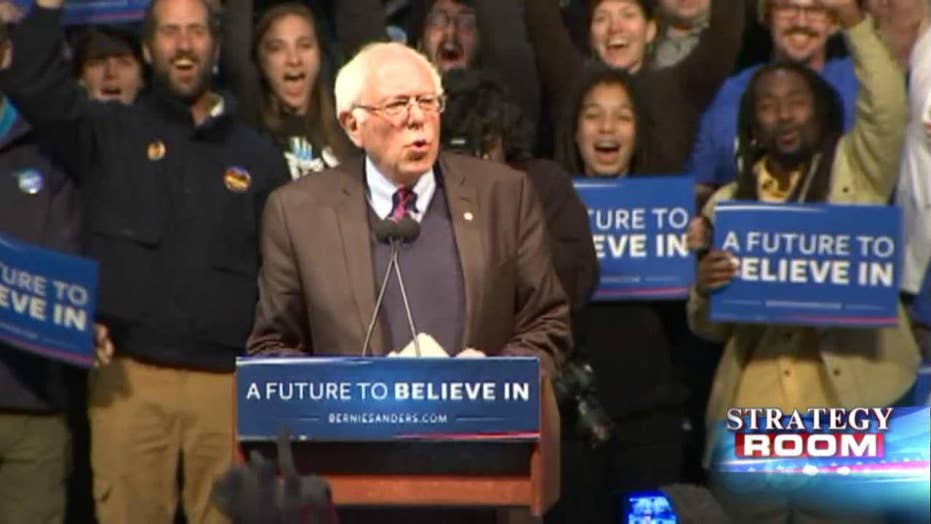 Sanders struggling to catch up to Clinton

Bernie Sanders is looking ever-westward for a shot at significantly closing Hillary Clinton’s delegate lead – or even taking his against-the-odds bid to the Democratic convention – and is aiming to stage a comeback starting this weekend in Washington state.

The state, anchored by the very liberal city of Seattle, is seen as friendly territory for the democratic socialist senator from Vermont, and is one of the most valuable delegate prizes left on the presidential primary map. It offers 101 delegates in Saturday’s caucuses – but Sanders will not only need to win, but win big to make any measurable difference in the race against Clinton.

The senator was buoyed, though, after walking away from the three contests earlier this week with more delegates than Clinton and chipping away, slightly, at Clinton’s enormous lead. While the front-running former secretary of state won the marquee Arizona primary, Sanders gained a net of nearly 20 delegates by pocketing wins in the Idaho and Utah caucuses.

Sanders has tended to do better in caucus contests, and will compete in three more of them this weekend. Hawaii and Alaska, while less valuable in terms of delegates, also are holding caucuses on Saturday, alongside Washington.

Sanders, who has been barnstorming Western states, told a Spokane, Wash., crowd on Thursday that a win in Washington would mark a major step toward the White House for his campaign, as he maintained he’s the best candidate to go up against the Republican nominee in November.

“We are the strongest candidate. … We’re going to work together to get the nomination,” Sanders told the crowd. “We are gaining a lot of momentum. Just in the last week, we have closed the gap with Secretary Clinton.”

Counting the “Democrats Abroad” global primary earlier this week, Sanders said he’s actually gained a net of roughly 25 delegates in recent days. Sanders returned to Washington Friday night for a Seattle rally, after a stop in Oregon earlier in the day.

The reality, though, is that Sanders would need a dramatic surge to catch up to Clinton or even hold her under the number needed to clinch the nomination.

Right now, Clinton has a gaping, 1,690-946 delegate lead over Sanders, when “superdelegates” – party insiders able to support whomever they want – are included. Even among the so-called pledged delegates, bound to candidates by their states' elections, Clinton has 1,223 to Sanders’ 920.

It takes 2,383 delegates to clinch the nomination.

"The real problem is the math," said Geoffrey Skelley, a political analyst at the University of Virginia Center for Politics, while noting Sanders does better in caucuses and is helped by “the fact that his supporters are more energized.”

During a Tuesday campaign stop in Everett, about 30 miles north of Seattle, Clinton noted she has gotten 2.6 million more votes than Sanders and more votes than anyone else, including Republican front-runner Donald Trump.

Most of the state's Democratic leadership has endorsed Clinton, including Gov. Jay Inslee and Sens. Patty Murray and Maria Cantwell.

But Sanders has raised more in individual contributions from this state than any other presidential candidate.

"The senator has made clear that we're taking this all the way to the convention in July," said Sanders' Washington state director Dulce Saenz. "We have an uphill battle, absolutely. There's no denying the math, but the second half of the primary calendar is much more favorable to Bernie."

Time will tell. After this weekend’s contests, there is mostly a lull in the primary calendar until a round of delegate-heavy Eastern states vote in late April – including New York, which Clinton represented in the Senate.

Fox News’ Lauren Blanchard and The Associated Press contributed to this report.