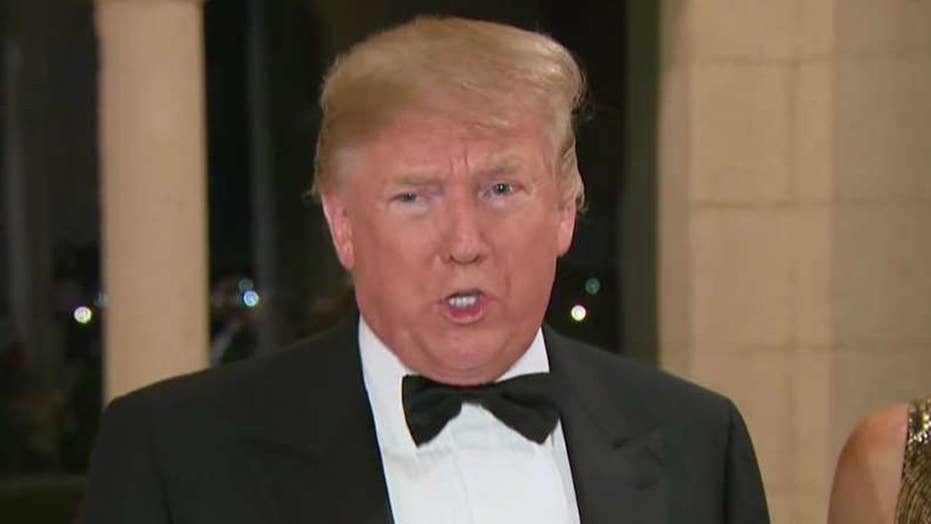 The president speaks to the press.

Surging in the polls and likely to post another large campaign fundraising haul in the coming days, an apparently jubilant Sen. Bernie Sanders rang in the new year with supporters in Iowa, the state that in one month will kick off the presidential primary and caucus nominating calendar.

The Democratic presidential candidate capped his "Big New Year’s Bash" at the downtown Marriott hotel in Des Moines by dancing to "Takin’ it to the Streets," the hit 1970s song by the Doobie Brothers.

At his party – held a couple of hours before the clock struck midnight – the populist independent senator from Vermont told the crowd, “I don’t have to tell anybody in this room how important the Iowa caucus is. You go first….You set the pace for this entire election system.”

And predicting a victory in Iowa, Sanders appeared to do a riff from Democratic presidential candidate Howard Dean’s infamous 2004 Iowa caucus night "Dean Scream" speech, minus the scream.

“We’re going to take that victory into New Hampshire, we’re going to go to Nevada, South Carolina, California,” Sanders emphasized as his supporters cheered with every state he mentioned. “With your help we’re going to win the Democratic nomination and with your help in 2020, we are going to defeat the most dangerous president in the modern history of America.”

The Sanders campaign told Fox News that roughly 1,300 people were in the crowd for the candidate’s New Year’s Eve party. "New Power Generation," the band of the late musician Prince, performed at the event.

Meanwhile in New Hampshire, the state that holds the first presidential primary in the White House race, tech entrepreneur Andrew Yang rocked in 2020 with supporters at a party in Nashua. The late-night bash, that went past midnight, was the final of six events the candidate held in New Hampshire on Tuesday to mark the new year.

Some supporters from all over the country drove to New Hampshire to celebrate with Yang, a onetime long shot who’s soared to mid-tier status. Tickets for the soiree sold out days ago.

Yang – who’s been known to cut-it-up on the campaign trail – took it relatively easy at his party.

Asked earlier in the day by Fox News if he was going to get crazy at his midnight bash, Yang said “probably not. I’m campaigning tomorrow too, so it would be unseemly for the candidate to get sloshed or anything on New Year’s Eve.”

“I need to be at it again tomorrow. So you know, you have to maintain control of your faculties,” he added.

But his message to supporters was, “Don’t let me be a stick in the mud because I’m going to be in an excellent mood and we’re going to ring in the New Year right and then we’re going to help make the 20’s the decade that we’re proud of to reverse a lot of the stuff that’s gone on in this country over the last number of years unfortunately.”

Yang jokingly picked a man in the crowd – named Sam – as his stand-in every time he was asked to have a toast with supporters at the event.

Asked by Fox News what his New Year’s resolution was, Yang said “to become president-elect of the United States of America and we are on our way thanks to you New Hampshire, so thank you."

As for his best moments in the fleeting decade, Yang noted “you know I had two kids this decade. I got married this decade. So I’d say those are the three biggest highlights I can remember from the tens. I guess that’s what we’re going to call it. The tens.”

While Yang was ringing in 2020 in Nashua, another presidential contender was in Manchester – New Hampshire’s largest city – for what was billed as the first house party of the new year.

Headlining the gathering was Sen. Michael Bennet of Colorado, a long shot for the nomination.

“My New Year’s resolution is to come in the top three in New Hampshire and do everything I can to beat Donald Trump and take back the Senate,” Bennet told those assembled.

“This year is going to be the most important one yet for our democracy, and I couldn’t be more excited to start 2020 with family and friends dedicated to moving the country forward,” he predicted.”

Meanwhile, while these Democrats were wooing voters in the early states, President Trump joined the New Year's Eve celebration at his Mar-a-Lago resort in Florida with well-known supporters, like attorney Rudy Giuliani, and family members, like Ivanka Trump and Jared Kushner.