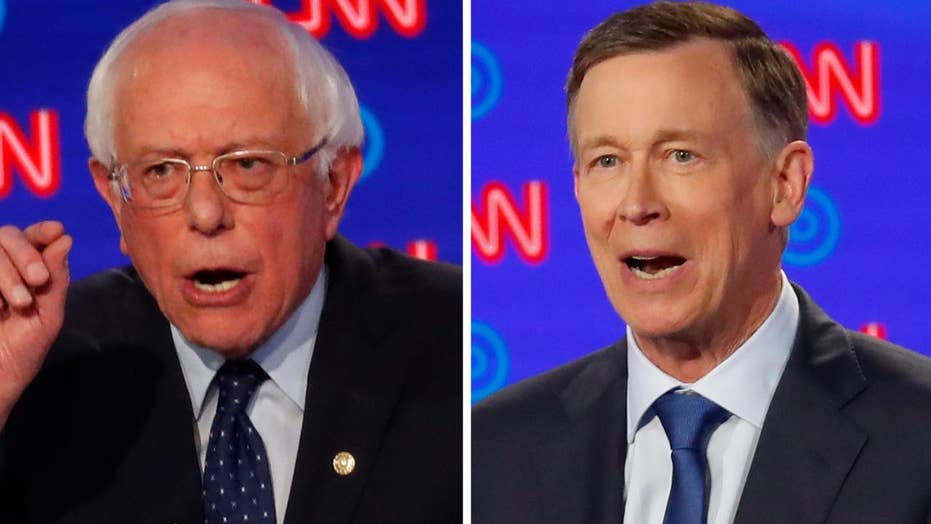 DETROIT -- Sen. Bernie Sanders didn’t waste any time trying to capitalize on one of the most talked-about moments in the first of two back-to-back Democratic presidential nomination debates in Detroit.

The populist independent senator from Vermont spent much of the first 30 minutes of the debate teaming up with fellow progressive standard-bearer Sen. Elizabeth Warren of Massachusetts in defending their "Medicare-for-all" proposals against fierce attacks from many of their more centrist rivals on the debate stage.

SANDERS, WARREN, STAND THEIR GROUND, PUCH BACK, AGAINST WITHERING ATTACKS ON MEDICARE-FOR-ALL

Right off the bat, Sanders succinctly responded to the charge from former Rep. John Delaney of Maryland that running on a government-run, single-payer health care system that would eliminate the private insurance currently held by some 150 million Americans would help “get Trump re-elected.”

Minutes later, Sanders punched back at Rep. Tim Ryan of Ohio – who claimed the senator from Vermont didn’t really know “Medicare-for-all” would provide coverage better than the current plans Americans would lose if the country moved to a single-payer system.

Sanders’ answer went viral and his campaign quickly took action – sending out an email to their massive list of supporters.

The campaign offered to send donors who give any amount of money their new “I Wrote the Damn Bill” sticker.

Fox News reached out to the Sanders campaign on Wednesday morning but no word yet on how much they’ve raised off their new pitch.