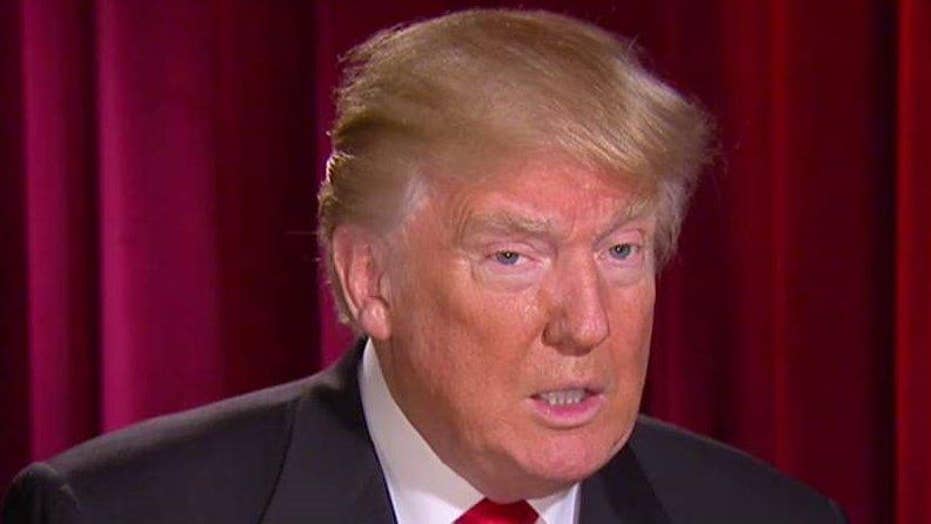 Trump: Goal of meeting with Paul Ryan is 'unity'

House Speaker Paul Ryan, ahead of a high-stakes sit-down with presumptive Republican presidential nominee Donald Trump, said Wednesday he can’t “pretend” the GOP is unified and acknowledged it will “take some work” to bring everyone together after the bruising primary.

At the same time, Ryan – who so far has declined to endorse Trump – signaled an interest in bringing all the wings of the party together.

Speaking after a closed-door meeting with other House leaders and rank-and-file members, Ryan suggested that “to pretend we’re unified as a party” would mean going into the fall election at “half-strength.” Rather, he said he needs the party to be at “full-strength” and so wants to pursue “real unification” of all factions within the GOP.

“We cannot afford to lose this election to Hillary Clinton,” Ryan said.

Rank-and-file members have been at odds over Ryan’s surprise move last week to refrain from endorsing the now-presumptive Republican presidential nominee. Some understand the speaker may not truly be ready, and also wants to check the pulse of his colleagues. Others worry that Ryan’s hesitation is costing the party valuable fundraising time – needed to prepare for an expected battle against Hillary Clinton and the Democrats in the fall.

Ryan and Trump are set to meet in person on Thursday. But the first step toward a potential reconciliation was Wednesday morning’s weekly conference for House Republicans – their first since Trump all but seized the nomination last week.

Asked after that meeting what he needs to hear to fully get behind Trump, Ryan said he and Trump will have that conversation. “I don’t really know him,” he said. “We just need to get to know each other.”

He reiterated the party must “merge” and “unify.”

Trump, for his part, told Fox News earlier Wednesday that he thinks he’s “doing very fine” with Ryan, while downplaying the stakes for the meeting.

“I have a lot of respect for Paul Ryan. We're going to have a meeting tomorrow. We'll see what happens. If we make a deal, that will be great. And if we don't, we will trudge forward like I've been doing and winning, you know, all the time,” Trump said.

Meanwhile, some GOP lawmakers indicated Wednesday they plan to back Trump but just want more clarification on his platform.

Rep. John Fleming, R-La., said he’ll get behind Trump but wants more information about his positions on abortion, national defense and immigration.

Rep. Raul Labrador, R-Idaho, said it is incumbent upon Trump to articulate his vision. He said he’ll support the nominee, but there’s a difference between supporting and “actually campaigning” for a candidate.

House Minority Leader Nancy Pelosi, D-Calif., at her own press conference, wasted no time tying Trump to her GOP colleagues on Capitol Hill. She told reporters there’s “not a dime of difference” between him and the Republicans in Congress.

Her deputy, Minority Whip Steny Hoyer, D-Md., said Thursday’s meeting will not change what he described as an environment of fear and exclusion created by Republicans over decades.

Fox News is told Ryan held back on endorsing Trump last week because he truly wanted to “marinate” on the presumptive nominee’s ideas for governing, and is troubled by some of his stances on issues and his remarks.

In particular, Fox News is told Trump’s plan for a temporary ban on Muslims entering the country and his initial hesitation in disavowing support from white supremacist David Duke “really stuck in Ryan’s craw.”

Trump told Fox News Wednesday morning that he did disavow Duke, while defending his plan for a temporary Muslim ban. He also floated the idea of having former New York City Mayor Rudy Giuliani lead a commission to study the issue.

There are a range of theories as to why Ryan might be holding back on embracing Trump – as he also signals he’s ready to step down in his role as convention chairman if Trump wants. Ryan could be looking out for himself and the rest of the party, worried Trump cannot win in November. At the same time, he could be holding back as a negotiating tactic, waiting to horse-trade with the presumptive nominee on Thursday and extract some promises about Trump’s tone and platform going forward.