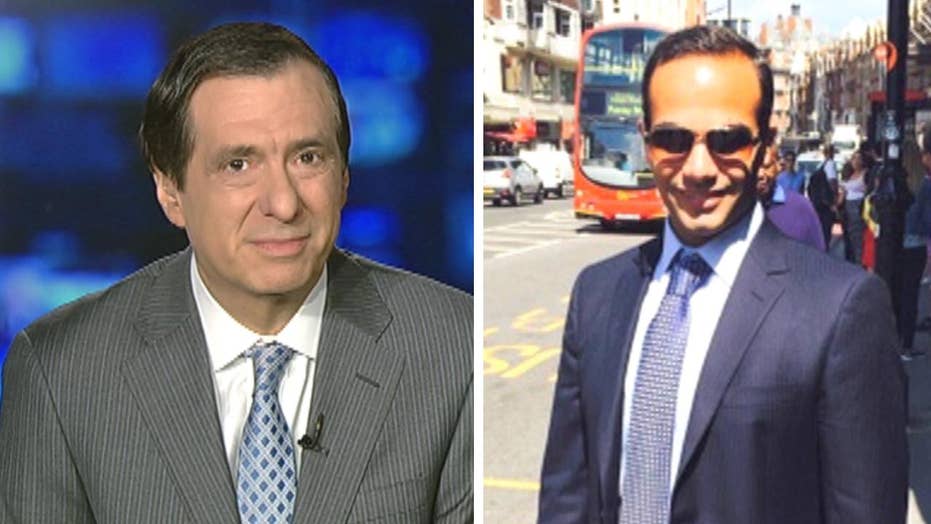 'MediaBuzz' host Howard Kurtz weighs in on the mystery surrounding George Papadopoulos and his guilty plea and why the mainstream media is ignoring particular elements of the story.

The fascinating thing when a scandal erupts is that everyone in America becomes an expert on prosecutorial tactics, defense strategy and criminal evidence.

Suddenly, it seems, all the armchair lawyers—including every journalist with a pulse--are debating the significance of the previously obscure George Papadopoulos.

What strikes me is that for those characters in the Trump orbit who were interested in colluding with Russia, they weren’t very good at it. Not much, as far as we know now, ever got done.

For instance, Papadopoulos said in one email that he had been introduced to Vladimir Putin’s niece. Except that, as a brief online search would have revealed, Putin doesn’t have a niece.

This isn’t to suggest that Robert Mueller shouldn’t try to unravel whatever contacts took place between Trump associates and the Russians, if only to shed light on what didn’t happen as well as what did.

While the indictments of Paul Manafort and his associate Rick Gates dominated the headlines, only the guilty plea by Papadopoulos is linked to the campaign and Russia.

Papadopoulos was an unpaid, low-level, London-based foreign policy adviser—yes, Trump called him “excellent” in a meeting at the Washington Post—who kept sending his superiors without getting much traction.

It’s certainly fair to say he was open to colluding with Russia, now that he’s been charged with lying to the FBI. Papadopoulos was touting the idea that he might be able to broker a Trump-Putin meeting, which was ludicrous and, of course, never happened.

The Post has identified some of the people not named in the agreement, such as Sam Clovis, Trump’s national co-chairman, listed as Papadopoulos’ supervisor.

Clovis told him "great work" when he floated his efforts to meet the Russian ambassador, which Papadopoulos never did. He also reported meeting Putin’s non-existent niece.

From the Post: "In August 2016, Clovis responded to efforts by Papadopoulos to organize an 'off the record' meeting with Russian officials. 'I would encourage you' and another foreign policy adviser to the campaign to 'make the trip, if it is feasible,' Clovis wrote."

Victoria Toensing, Clovis' attorney, told the Post that he "always vigorously opposed any Russian trip for Donald Trump and/or the campaign" and that his responses were a courtesy by "a polite gentleman from Iowa."

The Post also says that Papadaopoulos sent several Russia-related emails to Corey Lewandowski, then the campaign manager. There is no indication that he responded, other than one note referring him to Clovis.

Lewandowski told the "Today" show that "George was a low-level volunteer" and that he didn’t recall receiving any specific emails from him, as he was deluged with thousands of messages a day. He said he would be happy to talk to investigators but has not been interviewed.

One other person named by the Post was Manafort, who forwarded a Papadopoulos email to another campaign official, saying: "We need someone to communicate that DT is not doing these trips" to Russia. "It should be someone low level in the campaign so as not to send any signal."

Oh, and "the Professor" that Papadopoulos said had links to Russia and was proffering "dirt" on Hillary Clinton, including "thousands of emails"?

Scottish professor Joseph Mifsud told the Daily Telegraph that he knew nothing about digging up Hillary dirt and that it was a "laughing stock" to say he had introduced Papadopoulos to a Russian female national.

Earlier, Mifsud told the Post that he had "absolutely no contact" with the Russian government: "I am an academic, I do not even speak Russian."

So Papadopoulos appears to have been a lousy colluder.

It’s reminiscent of the meeting that Donald Trump Jr. set up with the Russian lawyer who was said to have promised dirt on Clinton. That session, also attended by Manafort and Jared Kushner, appears to have produced nothing.

We’ll learn more as the Mueller probe unfolds. But for now, while these fledgling attempts at getting oppo research from Moscow look bad, it seems they were a bust.