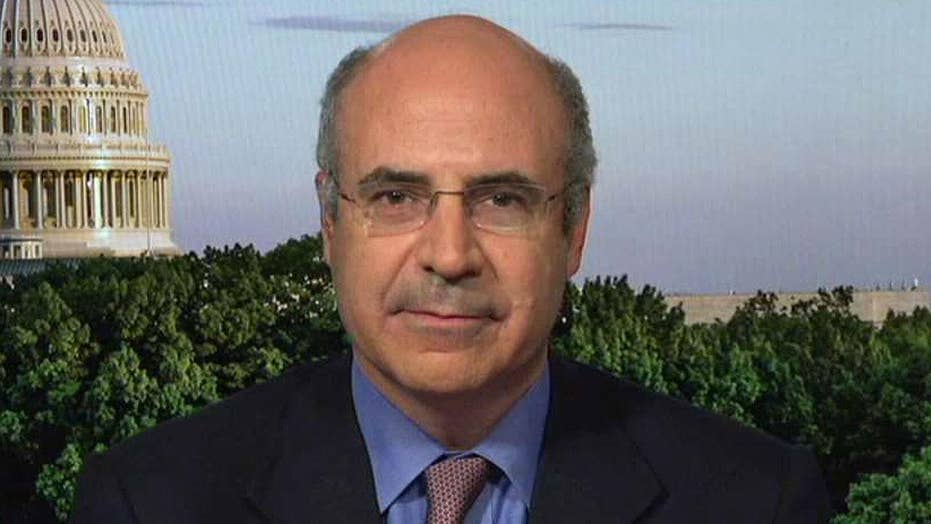 Browder to testify on Russian agents operating in the US

Businessman who spearheaded the Magnitsky act speaks out on 'The Story'

Senate Democrats used a parliamentary maneuver Wednesday to cut short a high-profile hearing, where a key witness was set to testify on Russia's misdeeds and also raise fresh allegations against the company behind the infamous anti-Trump dossier.

Bill Browder, the CEO and co-founder of Hermitage Capital, was set to tell the Senate Judiciary Committee that the co-founder of the firm Fusion GPS was hired to conduct a "smear campaign" against him. Further, he planned to testify the campaign was orchestrated by Natalia Veselnitskaya -- the Russian attorney who sought the highly scrutinized Trump Tower meeting with Donald Trump Jr., Jared Kushner, and then-campaign chairman Paul Manafort in June 2016.

Browder released written testimony ahead of the hearing but his public remarks were delayed when Democrats invoked the "two-hour rule" to protest Republican efforts to repeal ObamaCare. The seldom-used rule bars committees from meeting more than two hours after the full Senate begins a session.

“Veselnitskaya, through Baker Hostetler, hired Glenn Simpson of the firm Fusion GPS to conduct a smear campaign against me and Sergei Magnitsky in advance of congressional hearings on the Global Magnitsy Act.”

“I don’t know if the minority is intentionally trying to block testimony that may be critical of a firm behind the unverified Trump dossier, but I’ll bet two bits that had Paul Manafort or Donald Trump, Jr. appeared at today’s hearing, it would not have been prematurely shut down," Committee Chairman Chuck Grassley, R-Iowa, said in a statement. "The Democrat leadership is playing politics, plain and simple."

Browder now is expected to testify Thursday, but his statement makes clear that he will have plenty to say about Fusion GPS, the shadowy intel company founded by a pair of former Wall Street Journal reporters, including Glenn Simpson.

“Veselnitskaya, through Baker Hostetler, hired Glenn Simpson of the firm Fusion GPS to conduct a smear campaign against me and Sergei Magnitsky in advance of congressional hearings on the Global Magnitsky Act,” Browder wrote in his prepared testimony, adding that the firm helped to organize a Washington D.C.-based premiere of a “fake documentary” about Magnitsky and himself.

“While they were conducting these operations in Washington D.C., at no time did they indicate that they were acting on behalf of Russian government interests, nor did they file disclosures under the Foreign Agent Registration Act,” Browder’s prepared testimony said.

Browder added: “This was one of the best examples of Putin’s propaganda.”

Browder hired the late Sergei Magnitsky to uncover details of massive financial fraud in Russia involving corrupt Russian government officials. Magnitsky was imprisoned and ultimately beaten to death by Russian officers in Moscow. In the wake of his death, the U.S. passed a law named for him that brought sanctions against Russian oligarchs suspected of money laundering.

Grassley noted that he had been asking about the Russians working with Fusion GPS since March 2017. He cited the widely discredited dossier compiled about Trump that circulated among Democratic operatives and the media during the latter stages of the 2016 presidential campaign.

“Mr. Simpson’s company, Fusion GPS, is the same firm that oversaw the creation of the unverified Trump Dossier,” Grassley said in his opening statement. “It is vital for the Committee to fully understand Fusion’s failure to register under FARA and its role in the creating and spreading of the dossier.”

Grassley acknowledged that around the same time Fusion helped to “orchestrate a propaganda campaign” to repeal the Magnitsky Act, Fusion “appears to have been involved in the creation of the dirty Trump Dossier.”

“There are public reports that the FBI used the dossier to kickstart its Russia investigation—Did the FBI know that Fusion pitched Russian propaganda for another client as it pushed the Trump dossier?” Grassley asked in his opening statement, delivered before the hearing was cut short.

“Was it just a clumsy bait-and-switch effort in their unregistered propaganda and influence campaign? They offered dirt on the opponent to get the meeting and then made their pitch against the Magnitsky Act?” Grassley asked. “Or was it an offer of collusion? Or maybe both?”

Grassley and Ranking Member Dianne Feinstein, D-Calif., called for the president’s eldest son to testify, along with Manafort, and Glenn Simpson of Fusion GPS in the committee’s oversight hearing on FARA. All three witnesses have since reached arrangements to interview with the committee, for now, in private.

“There was no mystery of who Natalia Veselnitskaya was. A simple Google search would have shown that she was the main in house lawyer for a high level Russian government official whose son was accused by the US DOJ of money laundering from the Magnitsky case in the US,” Browder told Fox News before his appearance before the committee. “Either the people in that meeting didn't do any due diligence in advance or someone made an error in judgement agreeing to meet with her in the first place.”

But with regard to Fusion GPS, Browder told Fox News that he didn’t know what else Simpson was involved with, but that the group did not register under FARA.

“Natalia engaged Glenn Simpson and Fusion GPS in order to run an anti-Magnitsky Act smear campaign in Washington D.C. which was funded by sources connected to the Russian government,” Browder told Fox News.

Though he did not testify before the committee Wednesday, Thor Halvorssen, a human rights advocate with the Human Rights Foundation, submitted statements for the record to the committee in regards to his experience with Fusion GPS.

“It’s the sort of thing they specialize in—mainstreaming false smears, allegations that are so salacious and over the top that people assume they must be true,” Halvorssen told Fox News, noting the crude dossier about the president. “They did this with Browder, they did this with two other whistleblowers and they did this with me –they are outrageous accusations where innocence just isn’t enough.”

Halvorssen said public exposure is key to combatting Fusion GPS, which he said has been active in international smear campaigns.

in his written statement, Halvorssen told the committee that Fusion GPS targeted him and several others because of their criticism of Derwick Associates, a Venezuelan energy company that was reportedly being investigated for an alleged multi-billion dollar bribe.

“I think it’s clear that this is not the case of a company that forgot to register, or didn’t know that they had to register,” Halvorssen told Fox News. “Fusion GPS purposely, and quite deliberately, chose not to register so that their activity would fly under the radar, leading people to see the result of their work as organic and real, pushing a noble vision of truth, instead of what it actually is –smear campaigns in return for large enough retainers.”'

But in its statement given to Fox News earlier this month, Fusion said it had nothing to do with the Trump Jr. meeting.