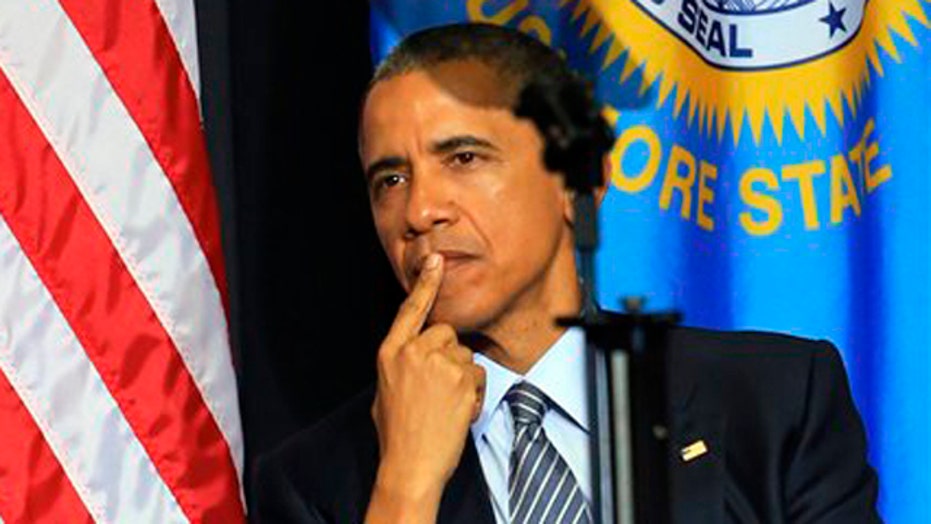 The White House was scrambling Monday to put a positive face on an upcoming summit of Persian Gulf states after learning leaders from four of the six invited nations are expected to skip.

While those nations are still sending representatives to the summit being hosted by President Obama later this week at Camp David, the absence of crucial heads of state -- notably, Saudi Arabia's new king -- could present an awkward situation for the administration. But State Department spokeswoman Marie Harf rejected the notion this was a "snub," and White House Press Secretary Josh Earnest likewise said the administration is "confident" that Saudi Arabia and other nations will be "ably represented" at the summit.

Earnest confirmed Monday that Saudi King Salman would no longer attend, noting the king originally had accepted the invitation. But Earnest stressed that Saudi Arabia did not express any concerns to the U.S. before or after the Saudi king's change in travel plans.

Deputy national security adviser Ben Rhodes said Monday afternoon Obama and the King had spoken earlier in the day. He added they also had spoken recently and would continue their dialogue despite the King opting out of the summit.

Earnest said the feedback the U.S. has had from Saudi Arabia has been "positive," and as for speculation that Riyadh might have been trying to send a message to the Obama administration with the change, Earnest said: "If so, that message is not received."

Saudi Arabia cited the situation in Yemen for the change.

In a statement Sunday, Saudi Foreign Minister Adel al-Jubeir said Thursday's summit coincides with a humanitarian cease-fire in Yemen, where a Saudi-led coalition is fighting Shiite rebels known as Houthis. He said Crown Prince Mohammed bin Nayef, who is also interior minister, would lead the Saudi delegation and the king's son, Deputy Crown Prince Mohammed bin Salman, who is defense minister, will also attend -- and the king would not.

Obama had apparently planned to meet Saudi Arabia's King Salman one-on-one a day before the gathering of leaders at the presidential retreat. The White House, though, did not present his decision to skip the summit as a sign of any substantial disagreement with the U.S.

"We first learned of the King's possible change of plans from Saudis on Friday night," a senior U.S. administration official told Fox News. "This was confirmed by the Saudis on Saturday. We coordinated closely with our Saudi partners on the alternate arrangement and timing of the announcement and look forward to welcoming Crown Prince Mohammed bin Nayef and Deputy Crown Prince Mohammed bin Salman.  This is not in response to any substantive issue."

A source familiar with the Saudi delegation's thinking also pushed back on the notion this may be a snub to the administration. The source, further, told Fox News the delegation never announced the king would attend or have a one-on-one meeting with Obama -- though the administration has suggested otherwise.

King Salman, who took power in January after his brother King Abdullah died, has not traveled abroad since his ascension to the throne.

The tiny island kingdom of Bahrain said separately Sunday  that its delegation would be headed by the country's crown prince, Salman bin Hamad Al Khalifa. Bahrain, whose leadership has close ties to the Saudis, is an important military ally of the U.S. It is the longstanding host to the Navy's 5th Fleet, which is responsible for operations around the Arabian Peninsula and northern Indian Ocean, and is Washington's main naval counterbalance to Iran.

Abdulkhaleq Abdullah, a professor of political science at Emirates University, told the Associated Press Gulf leaders were staying away to signal their displeasure over the nuclear talks.

"I don't think they have a deep respect, a deep trust for Obama and his promises. There is a fundamental difference between his vision of post-nuclear-deal Iran and their vision," he said. "They think Iran is a destabilizing force and will remain so, probably even more, if the sanctions are lifted. ... They're just not seeing things eye to eye."

The sultan of Oman, Qaboos bin Said, is also among those staying away. The sultanate will be represented instead by the deputy prime minister, Sayyid Fahd bin Mahmoud Al Said, and other officials, the country's official news agency announced.

The sultan's absence comes as little surprise. The long-serving monarch, whose country maintains cordial relations with Iran and has served as a go-between for Tehran and Washington, returned home in March after spending several months in Germany being treated for an undisclosed illness.

Health issues are also expected to keep the president of the United Arab Emirates, Sheikh Khalifa bin Zayed Al Nahyan, from attending. He suffered a stroke in January last year and has not been seen publicly since.

At the summit, leaders of Gulf nations will be looking for assurance that Obama has their support when the region feels under siege from Islamic extremists and Syria, Iraq and Yemen are in various states of chaos. Arab allies also feel threatened by Iran's rising influence and worry the nuclear pact taking shape with the U.S., Iran and other nations may embolden Tehran to intrude more aggressively in countries of the region.

"I think we are looking for some form of security guarantee, given the behavior of Iran in the region, given the rise of the extremist threat," Yousef al-Otaiba, the United Arab Emirates' ambassador to the United States, told the Associated Press. "In the past, we have survived with a gentleman's agreement with the United States about security. I think today, we need something in writing. We need something institutionalized."

"I don't believe there's a single country (in the council) that doesn't think a defense shield for the region is a bad idea," Otaiba said. "The challenge is how do you turn on a regional defense system when different countries are purchasing different equipment and at different paces? How do you link it? How do you get the radars to talk to each other?"

A high-level Saudi official told The Associated Press in Riyadh that his country wants a defense system and military cooperation similar to what the U.S. affords Israel. The official, who spoke on condition of anonymity because he wasn't authorized to disclose details of the Saudis' wish list at the summit, said they also want access to high-tech military equipment, missiles, planes and satellites, as well as more technology and training cooperation with the U.S.

The U.S. and five other nations are working to complete a deal intended to stop Iran's pursuit of nuclear weapons in exchange for easing penalties that are choking the Iranian economy. The White House says the Gulf countries would be better off with an agreement that blocks Iran's path to an atomic weapon.

Arab allies feel threatened by Iran's rising influence and they fear a nuclear pact will embolden Tehran. They worry that the deal would unlock billions of dollars that Iran might decide to use to further intrude in countries or support terrorist proxies.

Sen. John McCain, chairman of the Senate Armed Services Committee, said Obama will have to work hard to convince the Arab allies that they do not need to fear fallout from any nuclear deal.

"Right now they feel that they have no support from this administration so he has a steep hill to climb," said McCain, pointing to Saudi Arabia's decision to act unilaterally in Yemen.

McCain said that's why the Saudis gave Gen. Lloyd Austin, head of the U.S. Central Command, only "an hour's notice they were going to strike Yemen." Saudi Arabia has led airstrikes against Iranian-backed rebels who have toppled the Yemeni government.

Secretary of State John Kerry declines to say exactly what kind of reassurances Obama is prepared to offer at Camp David.

In general terms, Kerry said Friday in Paris, the U.S. wants to strengthen its "security-military relationship" with its Gulf allies and tackle a variety of problems, "foremost of which is the Iranian interference in the affairs of the countries of the region."

He said U.S. officials were fleshing out commitments that will create a "new security understanding, a new set of security initiatives."

Sen. Lindsey Graham, R-S.C., chairman of the Senate panel overseeing foreign aid, warns against the U.S. offering a massive arms package in exchange for Gulf nations' support of a nuclear deal. Graham said he isn't opposed to upgrading the military capabilities of Arab allies, but "if it has a hint of being connected to the Iran deal, I will do everything I can to make sure they never get one bullet or one plane."

Jon Alterman at the Center for Strategic and International Studies in Washington wonders if there is anything the United States can do that would reassure the Gulf states when it comes to Iranian expansionism.

"It seems to me that where they most want reassurance is where the U.S. is both least able and most unwilling to provide it," he said. "My guess is that the summit is going to leave everybody feeling a little bit unsatisfied."