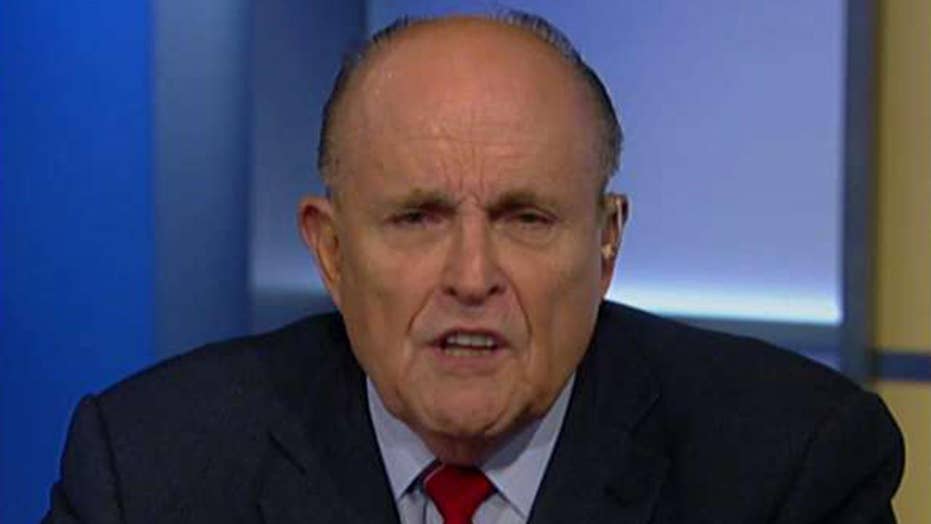 Giuliani hits back at Kamala Harris' demand for a probe into State Dept. officials working with him

Rudy Giuliani, President Trump’s personal lawyer, called Sen. Kamala Harris a “phony” Thursday after she suggested he should be "disbarred" for his involvement in Ukraine.

Harris told MSNBC Thursday that “the New York bar association needs to investigate Giuliani and probably disbar him” over his communications with the Ukranian government on behalf of the Trump administration.

“We need to know if the personal lawyer of the president, Giuliani, was using government resources for political gain,” she said earlier in the day.

Giuliani laughed off Harris’ comments, telling Laura Ingraham while in Ukraine, he was “uncovering” an “enormous pay for play scheme” in the Obama administration.

“If Kamala Harris weren’t a phony, she’d be saying, ‘I’m shocked that a vice president of the United States sold out his office for $8 million,’” he said.

"What they're really trying to do is to intimidate me and to discredit me because I'm doing such an effective job of showing what phonies they are," he said of Democrats.

Speaker of the House Nancy Pelosi announced Congress is launching an impeachment inquiry this week over a whistleblower complaint alleging President Trump pressured Ukraine’s president to investigate potential wrongdoing by Joe Biden and his son Hunter Biden in the country.