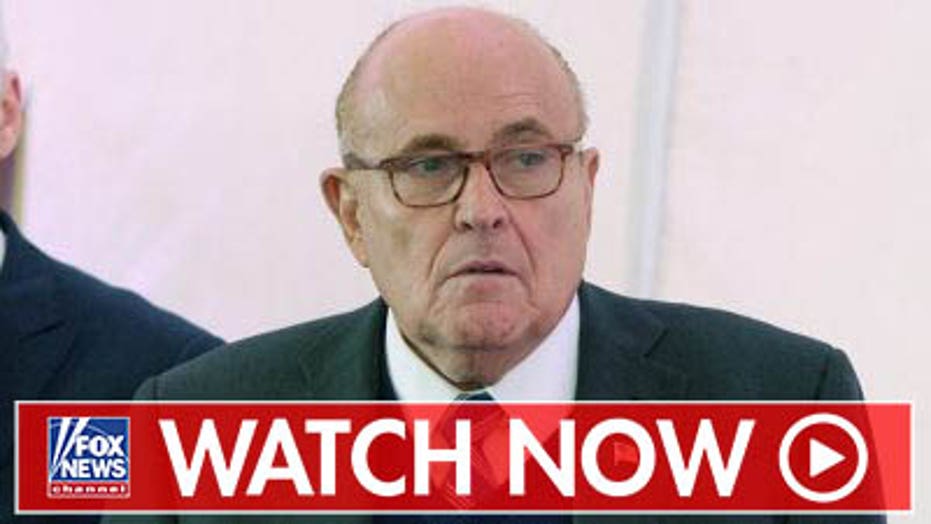 Video of an encounter between President Trump and a former campaign staffer that was the subject of a now-dismissed lawsuit shows people feel emboldened to lodge claims, according to Rudy Giuliani.

Many of those people often fail to apologize for spreading claims of any sort against the president, Giuliani, an attorney for the president, claimed Thursday on "Hannity."

"Luckily, we have the footage because some people would just believe it," the former New York City mayor said, referring to video released this week of the encounter in question between Trump and Alva Johnson. "I think it's because a lot of the media has created this hysteria about the president."

Judge William Jung of the Middle District of Florida dismissed Johnson's lawsuit in June, but video of the kiss was released by Trump's lawyers on Wednesday.

Giuliani said he believed the case was indicative of people spreading unsubstantiated claims against the president.

"The whole Mueller investigation was infused with that. ... They printed the wildest, craziest lies, and of course they had never apologized for it," he claimed. "People feel empowered to say anything they want."

According to Politico, Jung tossed out Johnson's complaint  last month and said in his 15-page order that "the complaint presents a political lawsuit, not a tort and wages lawsuit."

Jung added, "If plaintiff wishes to make a political statement or bring a claim for political purposes, this is not the forum.”

Johnson was director of outreach and coalitions for the Alabama GOP primary in 2016 and later did similar work in Florida.

The former staffer told MSNBC in February that in August 2016, she briefly interacted with Trump on an RV during a campaign stop in Florida. Before he stepped off the vehicle to speak with campaign interns, she told him to “Go kick ass” and said she hadn’t seen her family in a very long time. Johnson said Trump held her hand and began getting closer.

“This accusation is absurd on its face. This never happened and is directly contradicted by multiple highly credible eyewitness accounts,” then-White House press secretary Sarah Sanders said in February.

Hassan Zavareei, a lawyer for Johnson, said in a statement to the Washington Post the video “corroborates exactly what Alva said.”

“Now, whether or not everybody would have felt violated by that is an open question. But Alva was. And she testified exactly why she felt uncomfortable. She testified that she didn’t really know how to react when it happened and that she was confused and uncomfortable,” he wrote Thursday. “After Access Hollywood came out, Ms Johnson was able to put in context exactly what Trump had done to her and what it meant. Indeed he told her himself, in his own words, exactly what that kiss was."