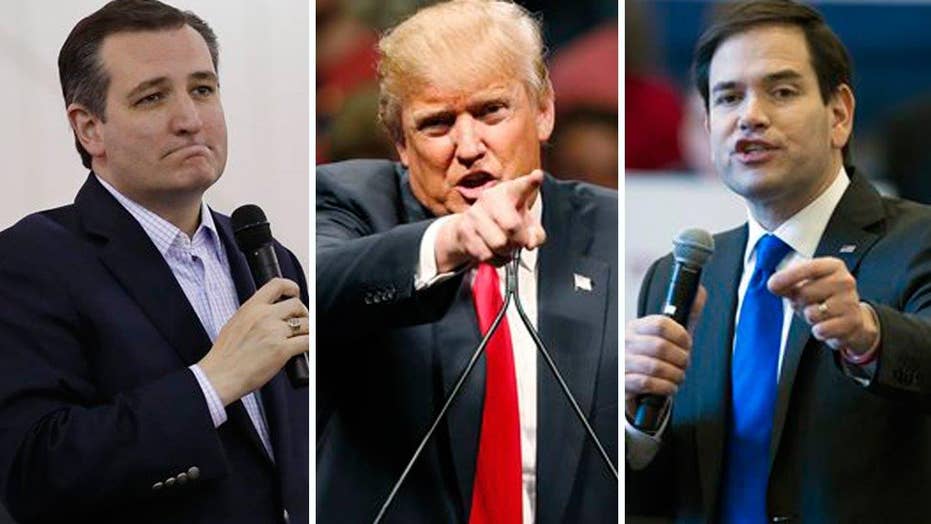 Analysis and predictions from 'The Five'

A weekend of insults exchanged among the three top candidates for the Republican presidential nomination was capped late Sunday when Florida Sen. Marco Rubio mocked front-runner Donald Trump before a heavily college-age crowd of around 3,000 at Roanoke College in Salem, Va.

Rubio, who had described Trump in a "Fox News Sunday" interview as a "con artist", joked that Trump "has these small hands."

"You know what they say about a man with small hands," Rubio said as the crowd laughed. "You can't trust them."

Rubio also mocked Trump for his complexion, as he has before, accusing him of having a bad "spray tan."

Rubio and Texas Sen. Ted Cruz stepped up their personal and policy-based barrage against Trump Sunday, warning that the real estate mogul's nomination would be catastrophic for the Republican Party in November and beyond.

Trump fired back, beginning his “Fox News Sunday” interview with an extended, uninterrupted attack on Rubio, calling him a political “lightweight” and “little,” adding that the first-term senator "couldn't get elected dogcatcher."

Meanwhile, Cruz warned the "Trump train" could become "unstoppable" if he rolls to big victories in this week's Super Tuesday primaries. Cruz cast Trump as a carbon copy of Democratic front-runner Hillary Clinton and suggested that not even Trump "knows what he would do" as president.

“The only campaign that has beaten Donald Trump is mine,” said Cruz, arguing that 65 percent of GOP voters don’t support Trump. “The only way to beat Donald Trump is to stand behind our campaign on Super Tuesday."

Cruz later became upset over continued questions by "Fox News Sunday" host Chris Wallace about the integrity of his campaign, following allegations about so-called dirty tricks that resulted in the forced resignation of spokesman Rick Tyler. Cruz accused Wallace of using Trump opposition research to frame questions and ended the interview in silence.

In the wake of Trump's endorsement this week by retired Ku Klux Klan Grand wizard David Duke, Cruz also suggested on “Fox News Sunday” that a hate group supporting Trump was making recorded calls – known as “robo-calls” -- telling potential voters not to pick a Cuban candidate. Cruz and Rubio are both of Cuban descent.

During a campaign event in northern Virginia, Rubio said he "refused" to repudiate Duke -- "a well known white supremacist racist" -- despite being asked repeatedly.

"We cannot be a party that nominates someone who refuses to condemn white supremacists and the Ku Klux Klan," Rubio said. "Not only is that wrong, it makes him unelectable."

Trump reportedly knew Duke in 2000 and cited him, Pat Buchanan and Lenora Fulani when explaining why he stopped considering a presidential run under the Reform Party.

"The Reform Party now includes a Klansman, Mr. Duke, a neo-Nazi, Mr. Buchanan, and a communist, Ms. Fulani. This is not company I wish to keep," Trump said, according to The New York Times.

Meanwhile, Clinton, fresh off a convincing victory in Saturday's South Carolina primary, all-but-ignored Bernie Sanders, her rival for the nomination, and turned her attention to the Republican field.

Starting her morning with stops at two Memphis churches, Clinton offered an implicit critique of Trump, asking worshippers to reject what she called "the demagoguery, the prejudice, the paranoia."

Asked by actor Tony Goldwyn, who later campaigned with Clinton in Nashville, about her thoughts on Duke's support for Trump, Clinton described it, simply, as "pathetic."