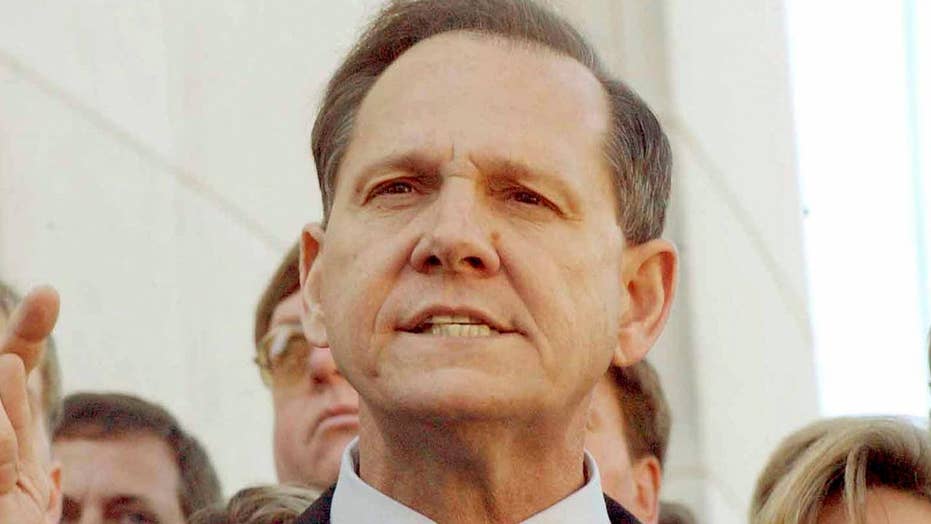 Moore, a Christian conservative known as the “Ten Commandments Judge,” has been polling ahead of incumbent GOP Sen. Luther Strange ahead of Sept. 26’s Republican primary runoff.

In a major boost for his campaign on Saturday, Moore was endorsed by Alabama GOP Rep. Mo Brooks, a House Freedom Caucus member who came in third place during the initial Aug. 15 primary.

During a rally in Huntsville, Brooks said he already voted absentee ballot for Moore and called out Senate Majority Leader Mitch McConnell, who backs Strange and whose political operation attacked Brooks during the primary.

“The Strange/McConnell forces maliciously and personally attacked and maligned me,” Brooks said Saturday. “They are doing the same to Roy Moore.”

FILE -In this April 26, 2017 file photo, Roy Moore smiles before announcing his Alabama Junior Senate race candidacy, in Montgomery, Ala. As former Alabama Chief Justice Roy Moore, runs for U.S. Senate, he doesn't shrink from telling voters he has twice been ousted from the bench for defying federal courts over the Ten Commandments and same-sex marriage. Instead, he wears those rejections as a badge of honor. (Albert Cesare/The Montgomery Advertiser via AP, File) (AP)

Strange, the former attorney general in Alabama, was temporarily appointed to the seat in April after then-Sen. Jeff Sessions joined the Trump administration. Favored by establishment and business Republicans, Strange has also been endorsed by both President Trump and Vice President Mike Pence.

“In the special election runoff for the Republican nomination for the U.S. Senate pitting constitutional conservative Roy Moore against former D.C. lobbyist/current swamp denizen Luther Strange, there is no contest – Roy Moore wins, hands down,” Jenny Beth Martin, chairperson of the Tea Party Patriots Citizens Fund, said in a statement this week.

"I am proud to endorse Judge Roy Moore for the U.S. Senate… I look forward to working with him to advance conservative principles by repealing ObamaCare, passing real tax reform and securing our borders,” said Meadows, chairman of the House Freedom Caucus.

Polling since the initial primary have shown Moore leading Strange. But the Senate Leadership Fund, a super PAC with ties to McConnell, circulated a poll last week that shows Strange down a point.

But as he’s risen in the polls, Moore has come under more scrutiny and has been the subject of negative news stories.

It was also reported this week that Moore, during a speech at a Baptist church earlier this year, suggested that the Sept. 11 attacks were punishment because America had distanced itself from God.

And opponents have seized on news reports scrutinizing the Foundation for Moral Law, an organization connected to Moore, that has not filed its taxes since 2014.

The winner of the GOP runoff will face Doug Jones, a former U.S. attorney under the Clinton administration who was endorsed by former Vice President Joe Biden.

Alabama hasn’t elected a Democrat to the Senate in more than 20 years.