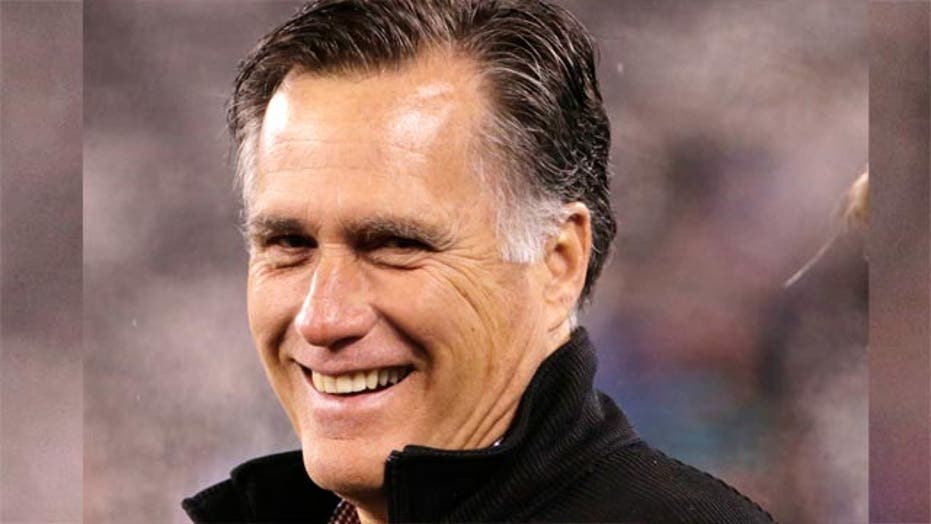 Romney makes his GOP pitch amidst large field of contenders

In his first public comments since speculation abounded that he was mounting a third campaign for the presidency, Mitt Romney on Friday was mum about his plans for 2016, but said the Republican Party must focus on making the world more secure, providing opportunity for all Americans and eliminating poverty.

Speaking at a meeting of the Republican National Committee at the USS Midway museum in San Diego's harbor, Romney, the party's 2012 presidential nominee, received a warm response from the crowd and a standing ovation when he came to the podium and when he finished his remarks.

"There is some speculation on whether I'm going to embark on a poitical endeavor in which I've been previously unsuccessful," Romney said. Then, with a smirk: "Let me state unequivocally that I have no intention of running for U.S. Senate in Massachusetts."

But while Romney acknowledged that the Republican Party won't face President Obama in next year's presidential race, he did take swipes at policies that he said have made the world less safe and the U.S. less prosperous.

In particular, Romney blamed the turmoil in places such as Iraq, Libya and Crimea on the policies of the Obama administration, citing former Secretary of State -- and presumptive Democratic presidential nominee -- Hillary Clinton as a key architect.

"The world is not safer six years after the election of Barack Obama. There's no question about that," Romney said. "The results of the Barack Obama, Hillary Clinton foreign policy have been devastating."

Romney also called for the repeal and replacement of ObamaCare, and said that Americans are struggling to make ends meet.

As for his plans for 2016, Romney did not rule out a third presidential run, ominously saying, "I'm giving some serious consideration to the future."

In recent days, Romney has aggressively cranked up his outreach to political allies -- leaving Republican operatives with the impression that he, indeed, is likely to join the 2016 horse race.

The former Massachusetts governor has been calling former aides, donors and supporters from his 2012 campaign -- as well as GOP leaders and insiders in the vital state of New Hampshire -- as he weighs a 2016 bid, sources close to Romney have told Fox News.

One longtime adviser who has spoken to Romney in the last few days told Fox News it is "very likely" the 2012 Republican presidential nominee will announce a 2016 campaign for president in the next three to four weeks.

Fred Malek, the self-made billionaire who serves as finance chairman for the Republican Governors Association, said Tuesday he believes both Romney and former Florida Gov. Jeb Bush will seek the GOP nomination next year.

"They've taken this forward a lot faster and a lot further than I would have imagined," Malek said in an interview with Fox News. "And I don't think they would have done that unless they have a serious intent on moving ahead."

On Wednesday, Kentucky senator and potential 2016 presidential contender Rand Paul indicated to Fox News that another run by Romney would be damaging to the party.

"If we try the same thing again we might get the same result," Paul said. "So maybe we need to keep lookin'."

Texas GOP Sen. Ted Cruz -- who also has been floated as a potential contender for the party's nomination -- has also critical of the former Massachusetts governor and 2012 Republican nominee. Cruz said nominating a moderate has not worked, referring to Romney as the "mushy middle."

Romney is scheduled to speak Monday at the kickoff of the 2015 Indian Wells "Desert Town Hall Speaker Series," which is sold out. In past years, the event has drawn headliners ranging from former presidents George Bush and George W. Bush, former Vice President Dick Cheney, former Senator Bill Bradley, and other luminaries.