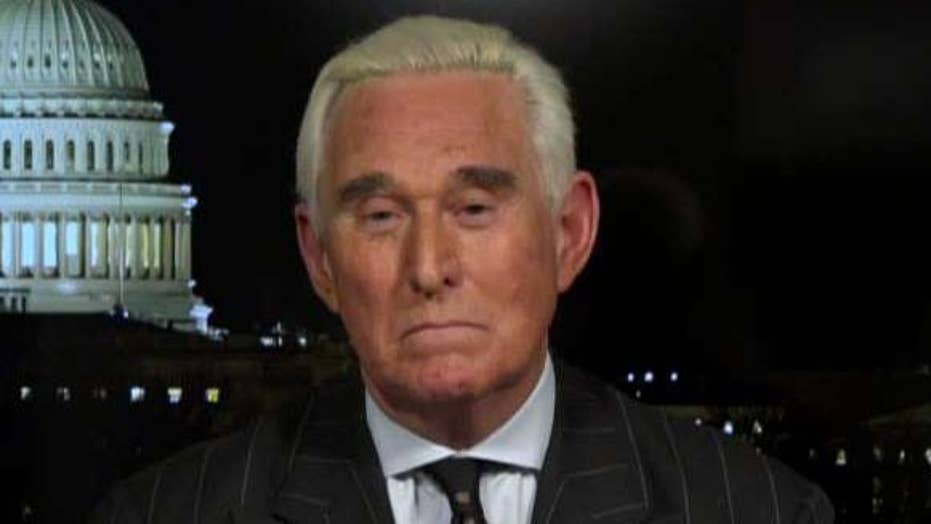 Roger Stone: I'm being targeted because they want to silence me

Former Trump adviser Roger Stone told Fox News on Monday that the indictment brought against him as part of Special Counsel Robert Mueller's Russia investigation last week is really part of an attempt to silence him for his support of President Trump.

“This is meant to silence me,” Stone said in an exclusive interview on “Hannity.”

Stone was taken into custody last Friday and indicted on charges of obstruction, making false statements and witness tampering.

The indictment does not charge Stone with conspiring with WikiLeaks, the anti-secrecy website that published emails of Democrats during the 2016 campaign, or with the Russian officers who Mueller says hacked them. Instead, it accuses Stone of lying about his interactions related to WikiLeaks' release during investigations by Congress and Mueller’s team.

The indictment stated that during the summer of 2016, Stone spoke to senior Trump campaign officials about WikiLeaks and information it might have had that would be damaging to Hillary Clinton’s presidential campaign.

It also said that senior Trump campaign officials contacted Stone to inquire about future releases, and that Stone continued to communicate with members of the Trump campaign about WikiLeaks.

The 24-page indictment alleged that Stone worked to obstruct the House Intelligence Committee’s investigation into Russian interference in the 2016 election by making false statements to the committee, denying he had records sought by the committee and persuading a witness to provide false testimony.

However, on Monday, Stone argued that the reason for the indictment against him was much simpler.

“Look, I honestly believe that they’re going to try to charge the president and the vice president with some hoped-up frame of Russian collusion,” Stone said on Monday night. “That way they can make [House Speaker] Nancy Pelosi president. She can make Hillary Clinton vice president and then step aside. It’s a nightmare but I think that’s what they have in mind.

“There is no Russian collusion,” he continued. “I had no collaboration with WikiLeaks. I’m not charged with conspiracy. Believe me, if they could’ve made that case they would’ve. But they want to silence me because I will stand up for Donald Trump. That’s what this is really about.”

In the interview Stone once again reiterated his support of the president while doubling down on criticism of the Mueller probe.

“This is not only an effort to silence me because I support Donald Trump ... and I’ve been a critic of the Mueller investigation ... and I think Donald Trump is making America great again,” he said of his relationship with Trump. “He’s my friend of 40 years. I have great affection for him and his family. I’m not going to testify against him because I possess no negative information. There is no Russian collusion. This is a witch hunt.”