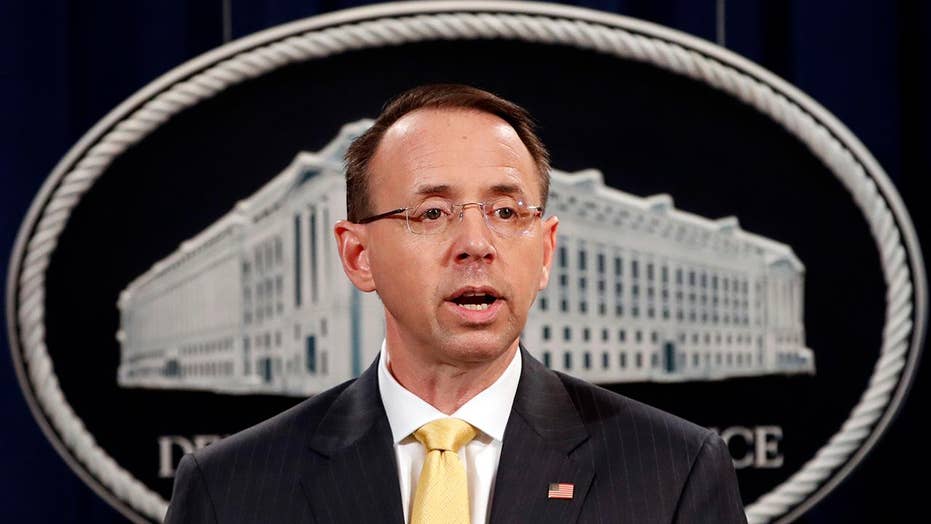 Russian nationals are indicted for interfering in U.S. elections; 'The Five' co-host Juan Williams and Vince Coglianese of the Daily Caller weigh in on 'Fox News @ Night.'

Deputy Attorney General Rod Rosenstein -- in President Donald Trump's crosshairs -- was summoned to the White House for a meeting with the president on Thursday, amid recent calls from some of Trump’s supporters for his ouster over his role in the expanding Russia investigation.

Rosenstein, who is Attorney General Jeff Sessions’ deputy and who was appointed by Trump, was spotted leaving the West Wing on Thursday afternoon, though a White House official played down the meeting's significance.

“Rod Rosenstein met with the president at the White House regarding routine department business,” the official said.

The meeting, though, seemed to have been arranged quickly. Rosenstein had been scheduled to introduce Sessions during an afternoon event at the Justice Department. But the emcee of that event announced that Rosenstein had been “called away on another matter.”

Joe diGenova: Jeff Sessions has a duty to fire Rosenstein

Justice Department officials said Rosenstein was at the White House for about an hour. He was accompanied by FBI officials and discussed document production to Congress, they said. Rosenstein also met with White House Counsel Don McGahn.

The meeting comes at a sensitive time for Rosenstein. Trump, outraged over the FBI’s raid of personal lawyer Michael Cohen’s office this week, has been publicly venting his frustration with Rosenstein, Sessions and Special Counsel Robert Mueller, who is investigating Russian meddling in the 2016 election.

“Mueller is most conflicted of all (except Rosenstein who signed FISA & Comey letter),” the president tweeted Wednesday.

TRUMP LASHES OUT AT MUELLER, ROSENSTEIN

Trump’s attack on Rosenstein is in reference to how the deputy attorney general signed a FISA surveillance warrant for former Trump campaign adviser Carter Page.

Chairman of the House Intelligence Committee blasts the FBI and Department of Justice for failing to provide the original document that prompted the Russia investigation.

The president has repeatedly decried the DOJ and FBI’s efforts to obtain that surveillance warrant.

Trump has long been public about his frustration with how Sessions recused himself from the Russia investigation, setting in motion the series of events that led Rosenstein to appoint Mueller as special counsel.

"The attorney general made a terrible mistake when he did this and when he recused himself or he certainly should have let us know if he was going to recuse himself and we would have put a different attorney general in,” Trump said Monday after news of the Cohen raid broke. “So he made what I consider to be a very terrible mistake for the country.”

Some Trump supporters have been urging him to get rid of Rosenstein.

"Rod Rosenstein is so incompetent, compromised and conflicted that he can no longer serve as the deputy attorney general," former federal prosecutor Joseph diGenova told Fox News’ “Hannity” on Wednesday.

But despite this pressure, Trump on Thursday tweeted that he agrees with his legal team in cooperating with Mueller’s probe.

“I have agreed with the historically cooperative, disciplined approach that we have engaged in with Robert Mueller (Unlike the Clintons!),” the president tweeted Thursday.

“The president wasn’t fully briefed by his lawyers on the implications” of not invoking executive privilege, Bannon told The Washington Post. “It was a strategic mistake to turn over everything without due process, and executive privilege should be exerted immediately and retroactively.”

Earlier Thursday, Trump denied seeking to shut down Mueller’s Russia probe, saying he would have fired the special counsel months ago if he'd wanted him gone.

“If I wanted to fire Robert Mueller in December, as reported by the Failing New York Times, I would have fired him,” the president tweeted. “Just more Fake News from a biased newspaper!”