The RNC chairwoman didn’t address the controversial video straight on, but instead focused on the need for stricter immigration laws in the country.

"I think the point is the president’s a problem solver," McDaniel said on CBS' "Face the Nation." "We have this caravan headed toward our country, we have an immigration policy that is not working for our country, and it’s time once and for all for Democrats and Republicans to work together to solve our immigration problem.”

The video features Luis Bracamontes, a deported Mexican immigrant who returned to the U.S. and killed two police officers in 2014, bragging in court about killing the officers. It is inter-spliced with footage of the migrant caravan traveling through Mexico. The Sacramento Bee reported earlier that Bracamontes returned to the U.S. during the George W. Bush administration after being deported twice.

The ad has been widely criticized by a number of prominent Republicans – including Sen. Jeff Flake of Arizona and Ohio Gov. John Kasich – as “sickening” and a mischaracterization of immigrants based on the actions of one man.

"This is a sickening ad. Republicans everywhere should denounce it," Flake said.

Romney McDaniel balked at those claims.

"I think the ad is highlighting that one individual got through the cracks and killed cops,” she said. “That should make very American upset and we need to fix our immigration system and the president's leading the way." 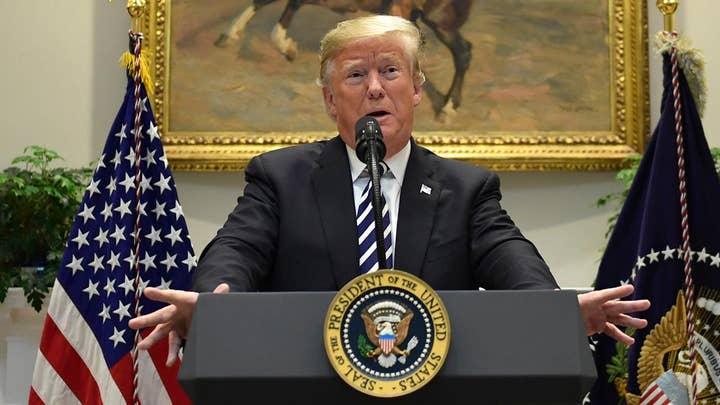 The decision to use the footage in an official campaign ad is the latest of Trump's election-week efforts to drive home his immigration policy with the hope of motivating Republicans to vote Tuesday. And it comes amid several immigration proposals the president has pushed in the final stages of the campaign, including sending troops to the border and revoking birthright citizenship.

Trump has long detailed what the administration sees as the  dangers presented by those living in the country illegally, although statistics show illegal immigrants do not commit crimes at a higher rate than citizens. During his 2016 campaign, Trump frequently appeared with "Angel Families" — those who lost loved ones at the hands of immigrants in the nation illegally.