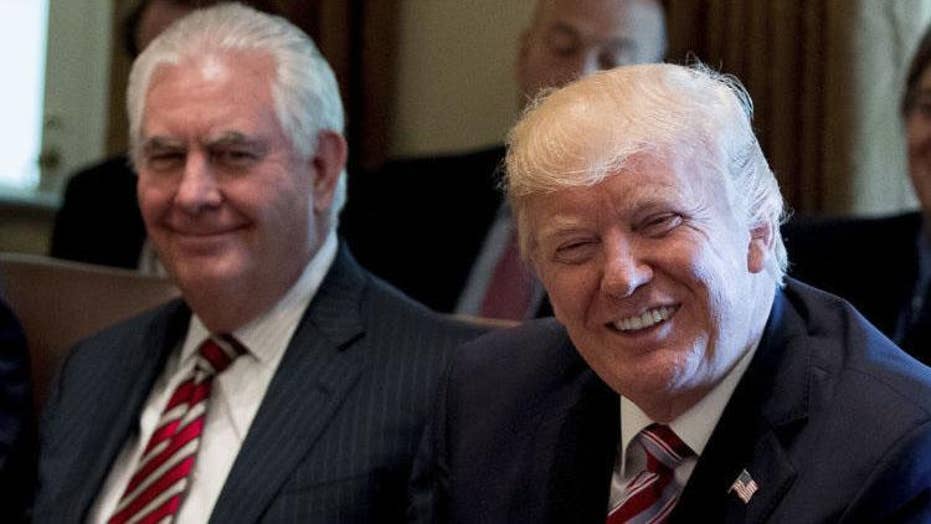 President posts that he works well with the secretary of state and that media speculation that illerson is being fired is 'fake news'; John Roberts reports from the White House.

"The media has been speculating that I fired Rex Tillerson or that he would be leaving soon - FAKE NEWS," Trump tweeted. "He’s not leaving and while we disagree on certain subjects, (I call the final shots) we work well together and America is highly respected again!"

A photo of Trump and Vice President Mike Pence attending the swearing-in ceremony of Tillerson accompanied the tweet.

The response from the president follows reports earlier this week that Tillerson was expected to resign from his post in January and would potentially be succeeded by current CIA Director Mike Pompeo. The succession plan would then involve nominating Arkansas GOP Sen. Tom Cotton to take Pompeo's role with the CIA.

Another possible but less-likely scenario that was floated on Thursday would've moved U.S. Ambassador to the United Nations Nikki Haley to the State Department.

WHO IS REX TILLERSON?

"He remains the secretary of state and as long as he serves at the pleasure of the president, he will continue to do that job," Nauert said. "He’s heard these kinds of stories before, and he’s just going about his business."

“We have no comment,” a CIA spokesperson told Fox News on Thursday, when asked about the discussions.

The former Exxon Mobile chairman and CEO has had a reportedly contentious relationship with the president.

In October, reports surfaced that Tillerson allegedly called Trump a "moron" after a meeting with cabinet officials in July. The comments came after President Trump gave a controversial speech to the Boy Scouts of America. Tillerson, who served as the president of the organization from 2010-2012, was reportedly upset over the content of the speech and allegedly threatened to quit.