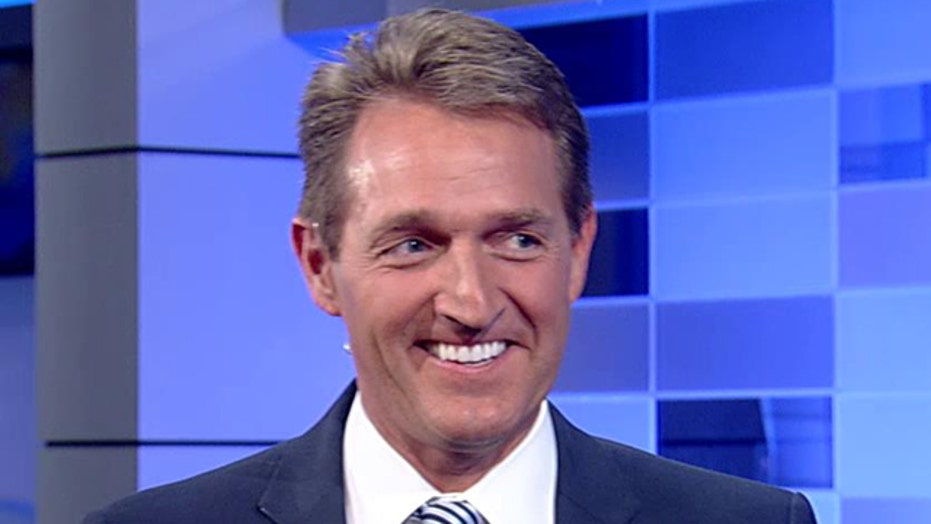 Sen. Jeff Flake sounds off on annual 'Tournament of Waste'

With low approval ratings and challenges from his own party, he will need to make the most of visits home if he's to endure a tough re-election fight that will be among the hardest-fought struggles for any incumbent Republican senator next year.

Flake is in the crosshairs of many Republicans in Arizona, and he's angered President Donald Trump by criticizing him. The White House is actively recruiting candidates to take on Flake next year, and Trump has pledged to spend money to defeat him.

Democrats also are eyeing Flake' seat, with U.S. Rep. Kyrsten Sinema confirming Friday that she is exploring a run as well as state Rep. Randy Friese looking into a bid. Political newcomer and community activist Deedra Abboud so far is the only declared candidate.

Flake takes it in stride. In a lengthy interview with The Associated Press on Thursday in rural county north of Phoenix, the congressman elected 17 years ago and now serving his first Senate term swiped away talk that he's damaged his re-election chances.

He recently released a book criticizing Trump and fellow Republicans for straying from the conservative values he embraces.

"And Arizona tends to elect senators that stand on principle and are independent in their thinking," he said. "So I'll be with the president when I think he's right and I'll oppose him when I think he's wrong."

The Republican field to challenge Flake is still taking shape as the president's backers sort out who they want to support.

Some are lining up with former state Sen. Kelli Ward, who lost her primary challenge to Sen. John McCain last year and has now set her sights on Flake. Others are looking to recruit state Treasurer Jeff DeWit, who was chief operating officer of Trump's campaign, or former state Republican Party chairman Robert Graham.

DeWit declined to comment, other than saying he's gratified people are mentioning him along with Graham.

For his part, Graham heaped criticism on Flake. He said the senator's refusal to back Trump's trade policies and his opposition to other presidential initiatives are making him seriously consider jumping in the race.

Graham, who calls DeWit one of his best friends, confirmed that both are being recruited by the White House and whichever chooses to run will have the other's backing.

This week, Flake covered lots of ground during his trip to Arizona.

He shook hands with voters at a western-themed restaurant in Prescott and a small-town grocery store.

In blue jeans and cowboy boots, he stood along the U.S.-Mexico border with a rancher and discussed how improvements in surveillance over the last decade have helped slow the flow of immigrants outside Nogales.

He also spoke about federal government overreach and criticized Trump's stance on trade.

Flake has backed reopening relations with Cuba and the Trans-Pacific Partnership trade deal that the Obama administration negotiated and Trump axed.

He's concerned that Trump's plan to renegotiate the North American Free Trade Act may hurt it more than modernize it. He has embraced immigration reform but does not share the president's enthusiasm for building a wall that would cut through his home state.

Flake is unapologetic on his outspoken views but said he needs to talk openly about what he supports and what he opposes, letting the chips fall where they may.

"I recognize, I've always recognized, that there are easier ways to get re-elected. But why do it if you are not accomplishing something? That's the way I look at it," Flake said. "You've got to feel like you're doing something. I feel like I am, and if it makes re-election tougher, so be it. But it is achievable."

At the same time, Flake is casting himself as a conservative. His recent book used the same title -- "Conscience of a Conservative" -- as the famous tome written by the late Arizona Sen. Barry Goldwater, a bedrock of conservative philosophy in American politics.

"I am a conservative, and conservatives believe in limited government, economic freedom and free trade," Flake said. "Those principles have animated the party for decades. And I think that's where we need to go if we want to be a governing majority in the future."

As he traveled the state, the Democratic race began to form. Sinema, a three-term congresswoman in Phoenix, said many in her state have encouraged her to run.

"It is something I am seriously considering," Sinema said. "When I make any decisions, Arizonans will be the first to know."