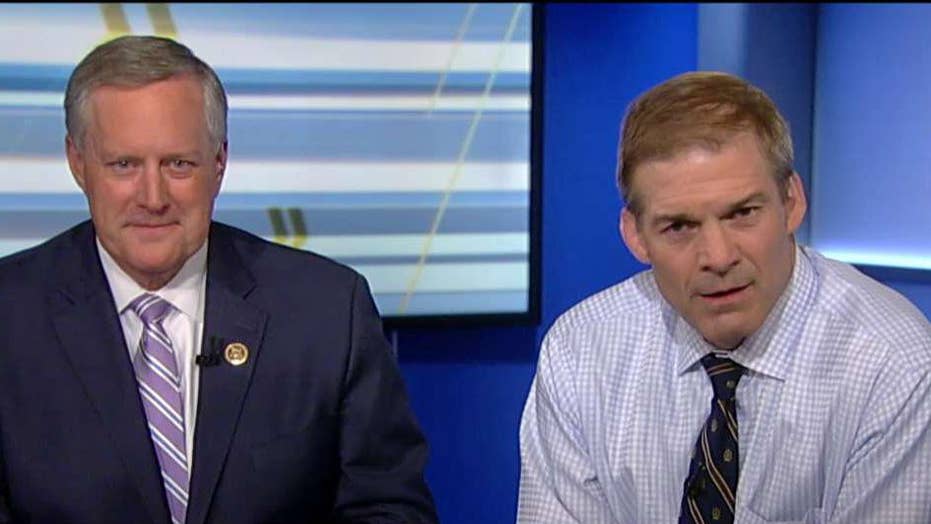 Meadows and Jordan to DOJ: Turn over the documents

Republican lawmakers on Tuesday said that they will be pushing for a vote on a resolution that compels the Department of Justice to cease the delays and finally release all remaining documents related to the Trump campaign probe.

Reps. Mark Meadows, R-N.C., and Jim Jordon, R-Ohio, both members of the House Freedom Caucus, told Fox News’ Laura Ingraham that they will push for a vote on the resolution, which will be filed on Wednesday, that would encourage Deputy Attorney General Rod Rosenstein to comply with their requests at the House intelligence committee.

“It's all about compelling DOJ to turn over documents so we could do proper oversight. If they have nothing to hide, turn over the documents,” Meadows said on “The Ingraham Angle.”

"It's all about compelling DOJ to turn over documents so we could do proper oversight. If they have nothing to hide, turn over the documents."

Jordan said the resolution is different from other the committee requests because it would come from the entire Congress.

“[It’s] one thing for us to say, one thing for the chairman of subpoena – it's another thing if the House of Representatives would actually go on record and say, 'Mr Rosenstein, we as the House, a majority of the House, say you're not giving us the information we need,” he said.

The resolution comes in the wake of a bombshell report that Rosenstein threatened to “subpoena” emails, phone records and other documents from lawmakers and staff on a Republican-led House committee during a meeting earlier this year.

“The DAG [Deputy Attorney General Rosenstein] criticized the Committee for sending our requests in writing and was further critical of the Committee’s request to have DOJ/FBI do the same when responding,” the committee's then-senior counsel for counterterrorism Kash Patel wrote to the House Office of General Counsel. “Going so far as to say that if the Committee likes being litigators, then ‘we [DOJ] too [are] litigators, and we will subpoena your records and your emails,’ referring to HPSCI [House Permanent Select Committee on Intelligence] and Congress overall,” the email added.

The Republican-led intelligence committee is seeking a vast array of documents related to the potential abuses of intelligence and memos that kick-started the investigation into the Trump campaign and whether it colluded with the Russian government. 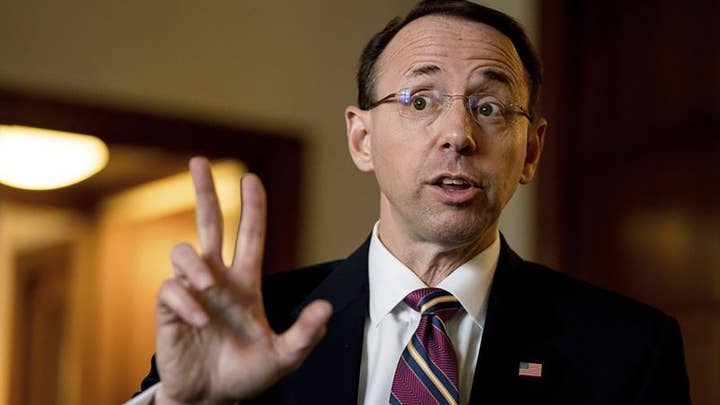 "DOJ continues to obfuscate and delay its production using an array of tactics, such as incorrectly categorizing the requested documents as Gang-of-Eight-level material in order to limit access," wrote Nunes, referring to an April 30 subpoena for the documents.

The so-called Gang-of-Eight refers to Republican and Democratic leaders in both houses of Congress as well as top lawmakers from the intelligence panels. "Such conduct by DOJ is unacceptable because the Gang-of-Eight is a legal fiction that has no basis outside of the confines of Presidential approval and reporting of covert actions.”