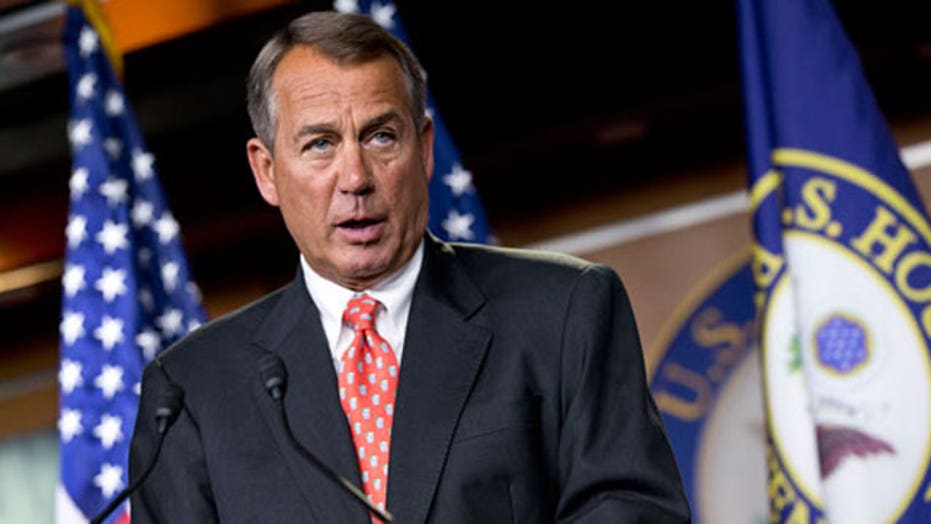 The 1971 San Diego Padres were a wretched lot. The team lost 100 games. Finished in last place, 28-and-a-half games out of first. They were the least-patronized team in the National League. The front office tired of the Padres’ losing ways and applied pressure on manager Preston Gomez. One day there was a close call at third base which clearly went against San Diego. But Gomez skipped out of the dugout anyway to argue with umpire Harry Wendelstedt. Upon arriving at third base, Gomez told Wendelstedt he knew the call was right but he was on orders from the Padres’ brass to “put on a show.” The Padres may not look like much on the field. But maybe the manager could show some spark and get into a good rhubarb with the umpires.

“I don’t mind, Preston,” replied Wendelstedt. “Take as long as you want.”

House and Senate Republicans may not be as pathetic as Gomez’s ’71 Padres. But they sure can’t figure out a way to avoid a calamitous shutdown at the Department of Homeland Security (DHS) on February 27. And like Gomez, they need to put on a good show and kick some dirt around the infield to show the conservative base they won’t cave and will fight President Obama’ immigration executive orders.

Congress fully funded all federal departments except DHS in December. DHS was the lone stray because conservatives insisted to leaders they use that spending bill to block the executive orders. The House easily passed a DHS bill a few weeks ago. Now the Senate is stymied, unable to even summon the DHS legislation to the floor due to a Democratic filibuster. Democrats are more than willing to consider a “clean” DHS funding bill. But not one with the immigration attachments.

Senate Republicans have already engineered three procedural votes over the past few weeks to cut off the filibuster. Such an operation requires 60 yeas. Republicans only hold 54 Senate seats. Thus, the votes failed each time. Congress is now on recess for a week. Yet Senate Majority Leader Mitch McConnell (R-KY) has scheduled a  fourth procedural vote for Monday, February 23 – with little chance of success.

But Republicans will put on a show.

Republicans will use the recess to stir up voters upset about the executive action. Republicans want them to call and write moderate Democratic senators who they think could be pressured into relenting to vote in favor of allowing the DHS bill to come to the Senate floor. For instance, Rep. Luke Messer (R-IN) cut a video message for Sen. Joe Donnelly (D-IN), urging him to switch his vote.

“By voting to block debate, you’re voting to block the democratic process. If you don’t like the bill we sent you, change it. Offer amendments. Let democracy work,” beseeched Messer of his fellow Hoosier.

“The House has done its job. We’ve passed a bill. It’s up to the Senate,” said House Speaker John Boehner (R-OH).

“It’s pretty clear we can’t get anywhere in the Senate. The next move is obviously up to the House. It’s clearly stuck,” said McConnell.

The back and forth is driving Homeland Security Secretary Jeh Johnson nuts. Johnson’s become a permanent fixture of late on Capitol Hill, roaming the halls of  Congress, practically begging for a solution. In fact Johnson says he’s spending so much time doorstepping lawmakers that he doesn’t have enough time to run his department.

“Please solve this impasse,” implored Johnson in an exclusive interview with Fox en route to appointments in the Rayburn House Office Building. “I’m worried that the House and Senate right now are pointing at each other. ‘It’s not me. It’s the other body across the way.’”

The GOP infighting is a unique feature of the Republican-controlled Congress. The next week will afford Republicans the opportunity to direct their fire at President Obama for the executive order and portray Senate Democrats as obstructionists. And imagine what will be said when the GOP says that senators like Donnelly and others from swing states voted “X” number of times to prevent a bill to protect Americans from even coming up for debate? Moreover, these internal contretemps don’t bode well for the future when Congress must conduct an epic fight to raise the debt limit, fund transportation programs and keep the entire government open for business this fall.

“They’d (House members) like to leave the hot potato with us,” said Senate Majority Whip John Cornyn (R-TX). “We tried our best and the math didn’t work.

“Why don’t they all just go home?” snorted Rep. Raul Labrador (R-ID) of the Senate. “Maybe they just need to pack up and they need to decide that for the next two years, we’re just not going to do anything in the Senate.”

“It’s all got to work out. I can’t tell you how. But it’s going to,” proffered Cornyn.

Not everyone is convinced of that.

“There is no plan which is scary,” said one Senate Republican source.

“We’re not drafting. There is no contingency plan,” said a Senior House GOP source.

With the deadline looming, some Republicans are batting around the idea of lopping off the immigration provisions and simply advancing the “clean” DHS spending bill with no attachments. A second option is a temporary, stopgap bill to fund the department for a few weeks. Such a measure is called a “Continuing Resolution” or “CR” in Congressional parlance.

“The question is can we pass a clean CR through the House?” asked Rep. John Carter (R-TX), chairman of the House Homeland Security Appropriations Subcommittee. “I don’t know.”

“It’s very tough,” said one senior House Republican aide about the prospects of stripping the immigration language from the bill and just okaying the DHS funding.

It’s generally thought that most of the House’s 188 Democrats would vote yes on either bill. But with 433 members, 217 are needed to pass if all lawmakers vote. According to sources, it is possible that the Republican majority might not be able to cough up 29 of its own just to avoid defunding the Department of Homeland Security. Moreover, the House could stumble clearing a procedural hurdle of its own just to bring a “clean” or stopgap bill to the floor. Most bills in the House first require a “rule” to establish the parameters of debate. But if a “rule” fails, the House can’t consider the underlying bill. The House narrowly approved the rule to bring up the last big spending bill called the “CRomnibus” in December. And that only came after some arm-twisting. In recent days, the House GOP leadership started cracking down on its deputy whips, committee chairs and subcommittee chairs over deviating on key procedural votes. The argument was that if those lawmakers wanted to remain in those positions, they must vote with leaders.

But if even a short-term or clean bill can’t pass or if the procedural vote on the rule were to collapse.

“They’re in a fix. We’ll see how they get themselves out of it,” said House Minority Leader Nancy Pelosi (D-CA).

Perhaps not the rules, but Senate precedent.

In 2013, then-Senate Majority Leader Harry Reid (D-NV) unilaterally altered the Senate precedent with what’s known as the “nuclear option.” Against violent objections from Republicans, Reid lowered the threshold from 60 yeas to just 51 to break some forms of filibusters. Conservatives want McConnell to turn the table on Senate Democrats and perhaps expand that practice. It would force Democrats to filibuster by actually seizing the floor for hours on end and talking, not just refusing to vote in favor of something.

“The answer is not to change Senate rules,” said Sen. Ted Cruz (R-TX), who commandeered the floor for 21 hours in September, 2013 over Obamacare. “I think the Senate rules wisely protect the minority.”

That sort of talk agitated Labrador.

Republicans know their base will light them up if they drop the immigrations provisions from the DHS bill. Boehner sidestepped a question about why the GOP had to marry the immigration language to the DHS measure.

“We’re happy to have that debate on immigration,” said DHS chief Johnson. “But don’t tie it to funding an entire department.”

There are a couple of unfortunate hypotheticals which could prompt a resolution to this dispute. One is a major natural disaster requiring extensive assistance from the Federal Emergency Management Agency (FEMA). The other is a terrorist attack. These storylines could break the deadlock quickly.

Until then, everyone’s locked in. And until there’s a reason to move, Republicans must stage a show on immigration.

Back on the diamond, umpire Hunter Wendelstedt told San Diego skipper Preston Gomez to “take as long as you want” when the Padres’ owners demanded a “show.” Republicans don’t have Gomez’s luxury for theatrics. Spending expires in two weeks. And the show really is over if they don’t have the votes to pass anything.