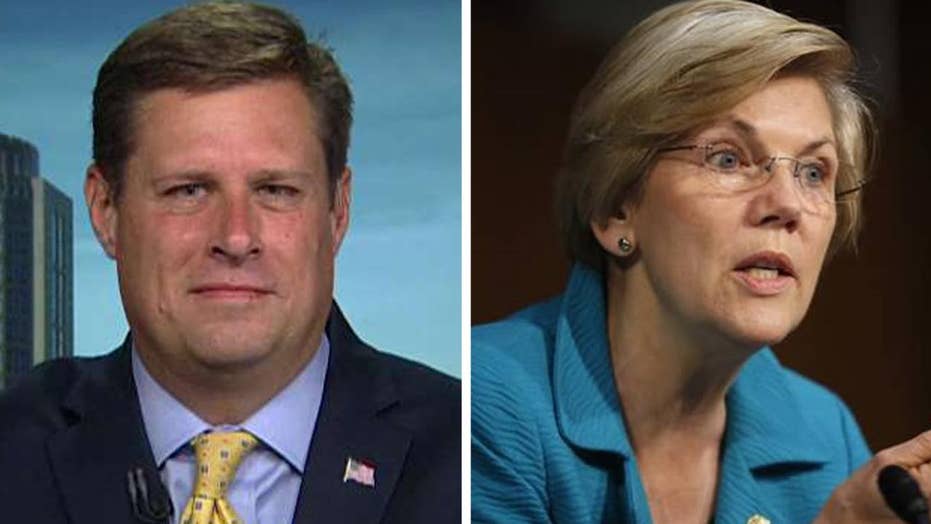 Geoff Diehl on why he's challenging Warren in 2018

On 'Fox & Friends,' Massachusetts State representative talks about his social media campaign to track down the 2020 hopeful

Sen. Elizabeth Warren may have her eyes on a 2020 White House bid, but first she'll have to make it through her own Senate re-election – and several Republicans are competing for a shot to challenge her.

Already this month, two Massachusetts Republicans, including a former Mitt Romney aide, have entered the race to unseat the progressive torchbearer, though with decidedly different strategies.

He comes armed with a familiar line of attack on Warren, who is seeking a second term, portraying her as a taxpayer’s nightmare who has ignored Massachusetts voters in her pursuit of national name-recognition.

“Elizabeth Warren promised just a few weeks ago that she’d spend all of her time and energy focused on Massachusetts,” Diehl said. “It’s very clear she’s using Massachusetts as a stepping stone for president of the United States in 2020.”

Beth Lindstrom, a staffer in then-Massachusetts GOP Gov. Mitt Romney’s administration, on Monday became the latest GOP challenger, saying she’s “all in” for the 2018 race.

However, she doesn’t appear to be building a campaign in the mold of Trump’s -- expressing disdain for political “name calling” and portraying herself a moderate in a largely liberal state whose voters have shown willingness to elect the occasional Republican to high office.

"Don't get me wrong. There is a time and a place for arguing your point of view. But eventually we have to stop finger-pointing and solve the problem," Lindstrom, a self-described "independent-minded Republican," said in a YouTube announcement.

Warren repeatedly has brushed off talk of a presidential bid. But she has traveled across the country in support of sanctuary cities, so-called "single-payer" health care and other aspects of her progressive agenda, as chronicled in Diehl’s Twitter feed and Where’s Warren Facebook page.

Warren’s re-election campaign said Tuesday that the senator, so far unopposed in the party primary, is ready for re-election and rejected the notion that she’s an absentee politician.

“Senator Warren is taking nothing for granted as she builds a strong grassroots campaign across Massachusetts,” campaign spokeswoman Kristen Orthman told Fox News. “She will continue her work in the U.S. Senate standing up for working families against powerful corporate interests.”

Orthman also pointed out that Warren announced her re-election back in January and that she’s already held 10 town hall-style events this year across the state, with three such stops scheduled Wednesday on the state’s south coast.

Bob Gray, president and founder of Boston-based Gray Media, acknowledged Tuesday that Massachusetts residents, most of whom are unaffiliated voters, typically cast ballots for Democrats but have picked Republicans in statewide races, including Romney. The state's current governor, Charlie Baker, also is a Republican.

“That’s likely because voters want a Republican to check on the Democratic-controlled legislature,” Gray said. “But they’re turned off by Republicans in federal races, especially over social issues."

He thinks Warren and her deep-pocketed campaign will be tough to beat but that Dielh or Lindstrom are capable, with Diehl perhaps having the early advantage as a result of better name recognition.

Warren has $11 million in her campaign account through the end of June, compared with $260,000 for Diehl and $28,000 for Shiva Ayyadurai, another GOP candidate and a technology entrepreneur, according to Federal Election Commission records.

Though presidents typically stay out of their party’s primaries, Gray pointed out that Trump has already defied that convention and mused that he could be a factor in Massachusetts.

“Trump probably wouldn’t mind taking a bit out of Warren, and Diehl might be the vehicle,” he said.

Lindstrom made no mention of Trump in the video. But she criticized his response to the violence earlier this month in Charlottesville, Va., that began with a white supremacist rally.

Lindstrom served as director of consumer affairs and business regulations under Romney and later as executive director of the Massachusetts Lottery. She also was the first woman to serve as the party's state director.