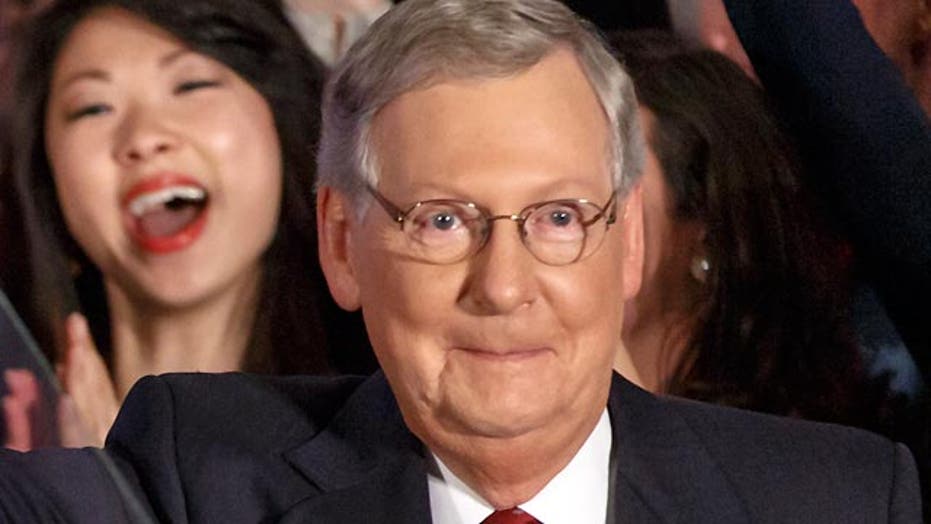 A huge midterm victory for GOP: Now what?

Midterms 2014: Now that Republicans have won control of the Senate and increased their majority in the House, what's most important for them and Pres. Obama? #2014Midterms

Voters handed control of the Senate to Republicans for the first time in eight years on Tuesday, putting the GOP in charge of Congress for the remainder of President Obama's term.

Republicans swept to victory in a string of contests across the country, retaining every one of the GOP-held seats up for grabs and picking up more than the six seats needed to take control of the Senate. Republicans enjoyed a banner night after mounting campaigns from coast to coast that, almost without exception, sought to cast their opponents as rubber stamps for the unpopular president. Senate Minority Leader Mitch McConnell, who fended off a Democratic challenge in Kentucky, is now poised to ascend to majority leader next year.

Republicans also are projected to retain control of the House -- and gain at least 12 seats, expanding their majority beyond their post-World War II record of 246 seats set in 1946.

The landscape means Republicans will have new powers to challenge Obama's agenda in the final two years of his term, able to launch investigations and hold hearings from both chambers; hold up key appointments; and pass GOP-favored legislation, if only to force the president to employ his veto pen. The division of power also could yield areas of agreement, on areas ranging from immigration to energy -- though the Affordable Care Act and efforts to undermine it could continue to sour talks on other issues.

Obama plans to hold a press conference at the White House, at 2:50 p.m. ET on Wednesday, on the heels of the election results.

McConnell, after winning his own race, said some things won't change next year -- but stressed that lawmakers and the White House don't have to be in "perpetual conflict" and "have an obligation to work together."

"Tomorrow, the papers will say I won this race, but the truth is ... tonight we begin another one, one that's far more important than mine -- and that's the race to turn this country around," McConnell said in Louisville.

In a written statement, current Senate Majority Leader Harry Reid congratulated McConnell and said he looked forward to working with him as the next majority leader.

Echoing a campaign ad about hogs that helped her gain attention early on in her race, Ernst declared, "We are heading to Washington, and we are going to make 'em squeal."

In a vital set of victories that helped put the party on the path to the majority, Republicans also held onto all three seats that were in contention this year.

But Republicans' momentum was undeniable.

A handful of other races remain too close to call -- most notably, in Virginia, where Republican Ed Gillespie is running a late-surging campaign against Democratic Sen. Mark Warner.

According to Fox News exit polls, this race is looking much closer than it did in pre-election polling, in which Warner, a former Virginia governor, held a months-long, 20-point lead over Gillespie, the former chairman of the Republican National Committee. Gillespie eventually cut that lead in half, but the race now appears even closer.

The Senate race in Alaska also is not yet called.

Fox News, though, can project that the Louisiana Senate race will go to a runoff on Dec. 6, meaning there will be no winner from Tuesday night. Based on exit polling, Fox projects that three-term Democratic Sen. Mary Landrieu and Republican challenger Bill Cassidy will both fail to exceed 50 percent of the vote, sending both into a runoff, this time without competition from candidates such as Republican Rob Maness.

At stake Tuesday night were 435 House seats, 36 Senate seats, and another 36 gubernatorial races.

The U.S. Senate battle, with control of Capitol Hill at stake, was the most closely watched.

The Obama factor may have weighed heavily over the vote Tuesday night. Fox News Exit Polls show more than a third of voters -- 34 percent -- said they voted to show they're opposed to Obama's policies. That number was a bit higher in 2010.

By contrast, just 20 percent voted to show support for Obama. Forty-five percent said it was not a factor.

The economy was by far the biggest issue for voters; 43 percent said it was the most important issue. Of those worried about the direction of the economy, they voted for the Republican candidate by a 20-point difference, exit polls show.

Surprise developments colored the elections in several states -- perhaps most notably, the Democratic candidate's decision to drop out of the race for Senate in Kansas. His decision immediately boosted independent Orman in his race against Roberts, who until that race shakeup was leading in the polls. Roberts ultimately survived.

In Kentucky, Grimes also suffered a PR blow after she repeatedly refused to say whether she voted for Obama. In the final days of the race, both campaigns turned to accusing each other of putting out inappropriate mailers.

At the state level, nearly a dozen U.S. governors were considered in political peril, making it one of the toughest years for incumbent governors in decades. However, most of them held on, and Republican candidates did well in several races -- including in Wisconsin, where GOP Gov. Scott Walker survived yet another challenge.