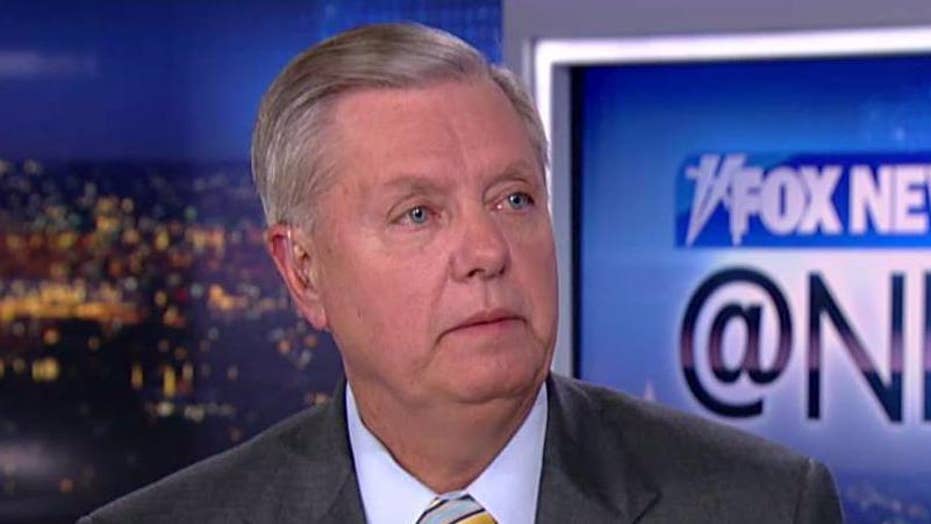 Lawmaker reacts to the terror in New York City.

Congressional Republicans rallied around President Trump’s calls for “extreme vetting” Wednesday in the wake of the deadly Halloween terror attack in New York, with some of his fiercest GOP critics agreeing that the deadly incident shows a need for immediate reforms.

Sayfullo Saipov, the ISIS-inspired fanatic who allegedly carried out the attack that left eight dead and several injured, entered the United States in March 2010 from Uzbekistan under the Diversity Visa Program, according to authorities.

Just hours after the attack, the president took to Twitter to announce he had ordered the Department of Homeland Security to “step up” the “already Extreme Vetting Program.” While he was criticized by lawmakers on both sides of the aisle, many Republicans are publicly supporting the president’s move.

“The one thing I like about President Trump is that he understands we’re in a religious war and to the American people, we’re fighting people who are compelled by their religious view to kill us all,” Sen. Lindsay Graham, R-S.C., said on “Fox News @ Night” Monday. “He is right to make sure when somebody comes into our country from a place where radical Islam, and that’s the enemy, thrives, we’re going to ask extra hard questions.”

Graham went on to discuss the need for “merit-based immigration,” and said “it makes no sense” to “hand out visas and green cards” in a random way.

What Graham was referring to was the Diversity Visa Program—a State Department program which offers a lottery for people from countries with few immigrants in America. Saipov entered the U.S. in 2010 under the program.

Other Republican lawmakers also called for policy reforms, including Sen. John McCain, R-Ariz., who said the program should be scrapped and replaced with a merit-based immigration.

It was a rare moment of agreement between McCain and Trump, who blamed Senate Minority Leader Chuck Schumer, D-N.Y., for backing it back when he was a member of the House of Representatives.

“The terrorist came into our country through what is called the ‘Diversity Visa Lottery Program,” a Chuck Schumer beauty. I want merit based,” Trump tweeted early Wednesday. “We are fighting hard for Merit Based Immigration, no more Democrat Lottery Systems. We must get MUCH tougher (and smarter).”

Republicans have long-criticized the program, and called for tighter borders, with Tuesday’s attack galvanizing much of their remarks.

“The lottery system, I’ve always been against it because it’s random—completely random,” Chairman of the House Homeland Security Committee Michael McCaul, R-Texas, said on “Fox & Friends” Wednesday. “I thought it should be merit-based…I have been working with Chairman Goodlatte to abolish this system, and I think this case just further demonstrates why that is absolutely necessary.”

Goodlatte, R-Va., said he has called for ending the diversity visa lottery “for years” and has sponsored legislation to do that.

“This flawed policy is just foolish in the age in which we live. Those in the world who wish us harm can easily engage in this statistical gamble with nothing to lose,” Goodlatte said in a statement Wednesday. “Our immigration policy should be based primarily on our national needs, security, and economics and not in part on any arbitrary system.”

Sen. Rand Paul, R-Ky., even suggested a “sponsorship” program Wednesday on “America’s Newsroom,” saying there should be an “American family who can be responsible” for those admitted into the country.

“I agree with the president,” Paul said. “There are certain countries with so much terrorism. Maybe we should stop certain countries from sending people here for a while. It’s not like you have a right to move to this country.”

“While Senate Democrats originally created the Diversity Visa Lottery in 1990, many have supported legislation that would have eliminated it in the years since,” Perdue said in a statement Wednesday. “I hope we can include this area of common ground as we work to fix our broken immigration system and strengthen our national security.”

Even Sen. Jeff Flake, R-Ariz., who announced his retirement last month and has repeatedly criticized Trump, said the approach toward immigration security has improved under the Trump administration.

“We’re doing better and I think the president has stepped up efforts to make sure those who come in are properly vetted," Flake said. "That’s good."

But despite the new, and renewed, support from Republicans on Capitol Hill, there are many lawmakers who have slammed the president for “politicizing” this week’s terror attack.

“President Trump, where is your leadership? The contrast btwn Pres Bush’s actions after 9-11 & Pres Trump’s this am couldn’t be starker,” Schumer tweeted.

Later Wednesday morning on the Senate floor, Schumer said that Trump, “instead of politicizing and dividing America, which he always seems to do at times of national tragedy, should be bringing us together.”

Schumer also said Wednesday that the president “can’t refrain from his nasty, divisive habits,” and noted that the White House did not call him after the attack.