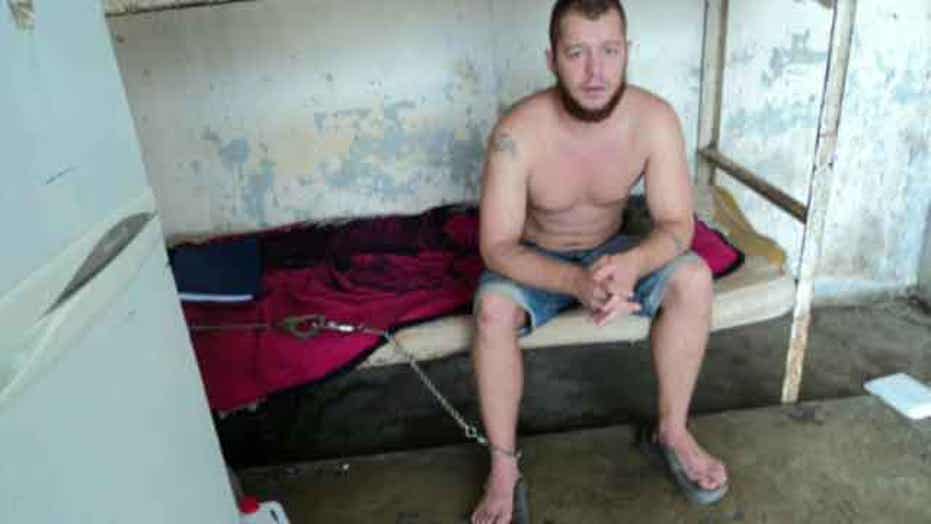 Can US government intervene to bring ex-Marine home?

Jon Hammar being held in Mexican prison over antique shotgun

Two Republican congressmen called Thursday for a national travel boycott of Mexico until the country releases imprisoned former Marine Jon Hammar, urging "all Americans" to campaign for the war veteran's freedom by turning off the tap on America's tourism dollars.

The statements from Reps. Michael Grimm, R-N.Y., and Duncan Hunter, R-Calif. -- both Marine combat veterans -- came as dozens of lawmakers pressed the Obama administration to more aggressively petition for Hammar's release. Hammar, who is locked up in a notorious Mexican prison on what his family says is a trumped-up weapons charge, is increasingly gaining the attention of Congress.

Amid conflicting signals about whether U.S. officials were making progress toward his release, Grimm and Hunter called for a national effort to bring Hammar home.

"Until U.S. Marine Jon Hammar is released, I am calling on all Americans to cancel their vacations to Mexico and not to book any travel there," Grimm said, calling Hammar's treatment at the hands of Mexican officials an "absolute disgrace."

"Hammar honorably served our country as a U.S. Marine, and we should be doing all we can to bring this innocent hero home," Grimm said.

A travel boycott, if joined by enough people, could make a dent in Mexico's economy. According to the State Department, 150,000 Americans cross the border every day.

Grimm and Hunter also said they were prepared to travel to Mexico to seek Hammar's release.

"Marines always follow one rule: Never leave a man behind. As a fellow Marine, I will not leave Jon Hammar behind in Mexico, even if it means I have to go there myself to get him and bring him home," Grimm said.

Hunter, meanwhile, questioned what the State Department was doing all this time.

"We need to know that the State Department is doing everything it can to secure his release. So far, I haven't seen the aggressiveness that's necessary and expected under the circumstances," he said.

Dozens of other lawmakers have expressed similar concerns. On Wednesday, nearly 70 members of Congress from both sides of the aisle wrote a letter to Secretary of State Hillary Clinton and Homeland Security Secretary Janet Napolitano urging the administration to do whatever it can to "bring Jon home."

"Jon put his life on the line for our country, and the United States government has a responsibility to him and his family to do everything within its power to bring him home," they wrote. Hammar is an Iraq and Afghanistan war veteran.

The lawmakers, led by Rep. Ileana Ros-Lehtinen, R-Fla., reserved pointed criticism for the U.S. border agents who allegedly gave Hammar bad information when he was crossing the border into Mexico with a vintage shotgun.

According to a friend and fellow Marine who spoke with FoxNews.com, Hammar asked the U.S. agents how to follow the law, and he was told he just needed to fill out a permit and declare the gun to Mexican authorities. Hammar was arrested and thrown in prison anyway.

"We are extremely concerned over the role Customs and Border Protection has played in this situation," the lawmakers wrote. "While the CBP insists it was not one of their agents who gave Mr. Bogan the bad directions, there can be no disputing its role in the Hammar incident. We would like to know how this could have happened, and why the CBP agents at the border gave Jon what was obviously wrong information. Jon and his friend trusted that the CBP agents were giving him the correct information, so they crossed into Mexico and attempted to register the shotgun legally."

A spokesman for CBP earlier this week said it would be unlikely an agent would have led Hammar to believe he could have brought the shotgun.

Though the State Department apparently has intervened to improve Hammar's safety in the prison, the lawmakers said the department has not provided any information on what is being done to get him released.

"This situation is unacceptable," they wrote.

A State Department official told Fox News that U.S. diplomatic officials in Mexico have been providing "consular services" since they were notified on Aug. 16 of his arrest.

At the same time, the family this week voiced optimism that Hammar would be released soon.

But a terse letter a top Mexican diplomat sent to Hammar's congresswoman dampened hopes he might be released in time for Christmas. In the two-page letter dated Dec. 12, but only seen this week by Hammar's family, Mexican Ambassador to the United States Arturo Sarukhan told Ros-Lehtinen the case must go to trial.