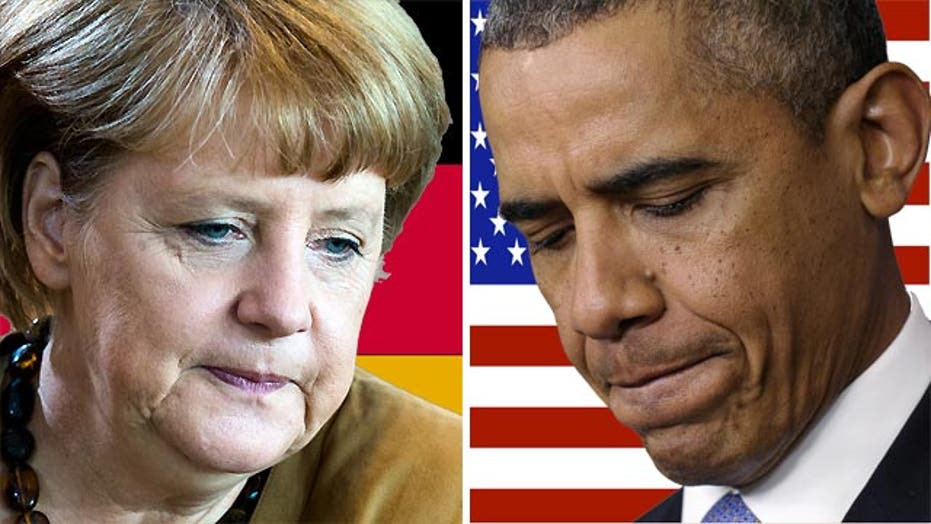 Will NSA spying damage US credibility?

Tensions between the U.S. government and its allies continued to flare amid reports that the National Security Agency monitored phone calls of 35 world leaders -- this after Germany's government summoned the U.S. ambassador to account for allegations that the agency may have targeted Chancellor Angela Merkel's cellphone.

The latest report in the Guardian says a secret memo reveals that the NSA was encouraging top departments to share their "Rolodexes" in order to keep numbers for top foreign leaders in their surveillance systems. The document reportedly said an official handed over 200 numbers, some of which covered 35 world leaders. Those leaders were not named.

However, the German government already has lashed out at the U.S. over reports that Merkel may have been targeted. White House Press Secretary Jay Carney, while saying the U.S. "is not monitoring and will not monitor" Merkel's communications, conspicuously did not deny that such surveillance may have occurred in the past.

On Thursday, the German Foreign Ministry summoned U.S. Ambassador John B. Emerson for a meeting with Foreign Minister Guido Westerwelle.

In a written statement, Westerwelle said he told the ambassador "it is unacceptable that the mobile phone of our Federal Chancellor may have been subject to surveillance activities by our American partners."

"For us, spying on close friends and partners is totally unacceptable. This undermines trust, and this can harm our friendship," the foreign minister said. "We need the truth now."

For Washington, it is the latest in a series of flare-ups over reported surveillance that lately have involved France, Mexico and Brazil.

More damaging information could be on the horizon. The Washington Post reported Friday that U.S. officials are telling some foreign intelligence agencies that NSA leaker Edward Snowden has documents detailing their cooperation with the United States.

This week, France demanded explanations of a report the U.S. swept up millions of French phone records, and also summoned the American ambassador to demand an explanation.

Germany, which has Europe's biggest economy, has been one of Washington's closest allies in Europe. The United States was West Germany's protector during the Cold War and the country is still home to thousands of U.S. troops.

Carney said Wednesday that Obama assured Merkel that "the United States is not monitoring and will not monitor the communications of the chancellor."

"I think we are all outraged, across party lines," Wolfgang Bosbach told Deutschlandfunk radio. "And that also goes for the response that the chancellor's cellphone is not being monitored - because this sentence says nothing about whether the chancellor was monitored in the past."

"This cannot be justified from any point of view by the fight against international terrorism or by averting danger," Bosbach said.

Merkel had previously raised concerns over allegations of mass electronic eavesdropping when Obama visited Germany in June, demanded answers from the U.S. government and backed calls for greater European data protection. Her government is striking a markedly sharper tone now, and signaling frustration over the answers provided so far by the U.S. government.