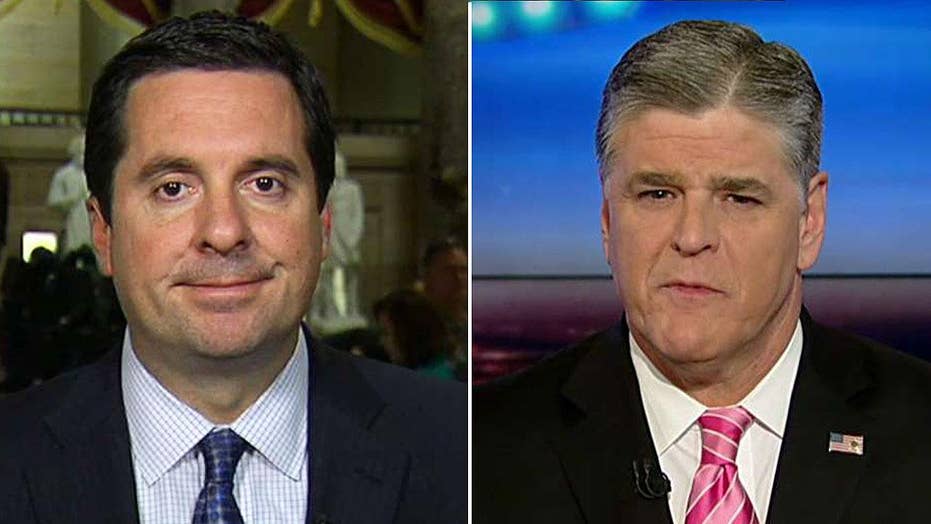 The chairman of the House intelligence committee told Fox News' "Hannity" Thursday night that "I felt like I had a duty and obligation to tell" President Trump that members of the intelligence community "incidentally collected" communications from Trump's transition team.

"As you know [Trump]’s been taking a lot of heat in the news media," Rep. Devin Nunes, R-Calif., told host Sean Hannity, "and I think to some degree there are some things that he should look at to see whether in fact he thinks the collection was proper or not."

Nunes was criticized by the committee's ranking member, Rep. Adam Schiff, D-Calif., for making the information public without first telling them. Another of the committee's Democrats, Jackie Speier of California, told reporters Nunes had apologized to them earlier Thursday.

Nunes told Hannity that the committee expected to get further information about the intercepted messages Friday. He reiterated that the reports he saw "had nothing to do with Russia ... but it was important enough that I thought the president of the United States should know what is being said about him and his transition team."

The chairman also said the lack of an FBI investigation into who leaked details of phone calls between then-national security adviser Michael Flynn and the Russian ambassador to Washington was "quite concerning."

"We need to make sure that these leaks are being tracked down," Nunes said, "and it’s part of our investigation ... to make sure that we do try to find who was at least knowledgeable of the information that eventually got leaked."