COVID relief funding bill heading to President Trump, but unclear whether he will sign

Georgia Rep.-elect Andrew Clyde arrived in the nation's capital with the unique distinction of already having federal legislation named after him.

The gun store owner gained prominence for fighting back when the IRS suddenly seized nearly $1 million from his bank account in 2013.

Not only did Clyde win his civil asset forfeiture case against the IRS, but he got Congress to pass a law last year so the IRS could never do it again.

"That entire ordeal really showed me that one person who is persistent and tenacious and just doesn't give up can actually make a difference," Clyde, 57, told Fox News in an interview.

In the 9th District, he beat eight Republicans – including seasoned politicians – in the primary to succeed Republican Rep. Doug Collins, who ran unsuccessfully for the Senate. Clyde, a political novice, won in the red northeast Georgia district because his story of standing up to government overreach struck a chord.

"It was this battle with the Internal Revenue Service that resonated with the people in the district, and they saw me as a fighter, and I am," said Clyde, who lives in Athens. "I'm a fighter. And our campaign was 'fight and win.'"

Rep.-elect Andrew Clyde, R-Ga., stands out in the incoming House freshman class because he already got a law enacted. On July 1, 2019, Trump signed the Clyde-Hirsch-Sowers RESPECT Act as part of the broader Taxpayer First Act. (Marisa Schultz/Fox News)

Clyde ran as a pro-President Trump, pro-life, pro-border wall conservative who wants to dismantle the IRS and limit the power of the federal government.

DEMOCRATIC REP.-ELECT KAI KAHELE, COMBAT VETERAN, SAYS TRUMP SUPPORTERS ARE 'A FORCE TO BE RECKONED WITH'

He’s spent the last three decades building a business that started as a hobby out of his garage in 1991 and has expanded to two brick-and-mortar stores in Georgia.

Paramount to Clyde’s platform is his staunch support of the Second Amendment and belief that there should be no government constraint of gun ownership.

While Democrats and even some Republicans in Congress support expanding background checks on firearm purchases, closing loopholes at gun shows and more, Clyde is convinced existing regulations have already gone too far.

He campaigned on the "complete elimination" of the background check system established by the 1993 Brady Handgun Violence Prevention Act. The law requires FBI criminal history checks on individuals before gun purchases in an effort to prevent felons, domestic abusers, drug addicts and those adjudicated as mentally unfit from purchasing a gun.

Clyde said coronavirus lockdowns further exposed the broken federal system. His business, Clyde Armory, "had to turn away hundreds of customers" during the pandemic because the FBI background checks were backed up due to state office shutdowns, putting many people in "limbo," he said.

Typically, if a buyer hasn’t gotten a determination on the background check after three days, then the firearms dealer can sell the weapon anyway.

But during the pandemic, the "government simply ignored that [three-day rule] completely," Clyde said. Background checks are only good for 30 days. So when results took more than a month, they were already invalid and the prospective buyer had to start the process all over again, Clyde said.

"It is completely broken," Clyde said of the background check system. "It puts the federal government between the Constitution and the individual in a way that denies the person their individual constitutional right. That's not right."

As to what, if anything, should replace the Brady system, Clyde said there needs to be "more negotiation on that," acknowledging the public's desire to keep guns away from violent criminals.

"You cannot have a law that eliminates a constitutional right with the intent of giving a little bit of perceived safety," Clyde said.

The FBI conducted 2.9 million background checks related to firearms purchases in April, making it one of the busiest months for such checks. (Jonathan Hayward/The Canadian Press via AP)

In the 2019 gun-rights case Kanter v. Barr, Barrett wrote a dissenting opinion that argued that a conviction for a nonviolent felony — in this case, mail fraud — shouldn’t automatically disqualify someone from owning a gun. She said the government had failed to introduce data "to show that disarming all nonviolent felons substantially advances its interest in keeping the public safe."

Gun control advocates and Democrats panned this position as "radical" during her confirmation hearings.

Clyde, a federally licensed firearms dealer, also wants taxes on guns and ammunition to be eliminated, calling the added cost an infringement on a constitutional right. That means repealing the taxes imposed under the Pittman-Robertson Act and the National Firearms Act.

Now that he’s elected to Congress, Clyde's top priority will be constituent services, because he knows firsthand what it’s like to be the person on the other end of the line desperate for help. 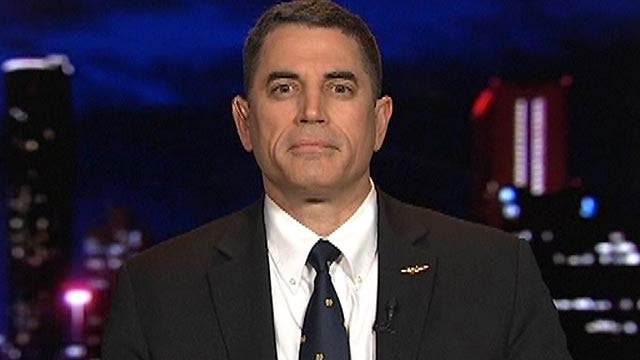 His ordeal with the IRS began after President Obama's 2012 re-election and the Sandy Hook Elementary School shooting, sparking a sales boom at Clyde Armory. Many people were concerned the government would enact new firearms restrictions.

The Bank Secrecy Act requires financial institutions to report cash deposits of more than $10,000. But since terrorists and other criminals know this rule, banks also must report patterns of deposits slightly below the $10,000 threshold.

Clyde's legitimate large bank deposits tipped off the IRS to suspected "structuring"-- that is, making deposits deliberately calculated to skirt reporting requirements of $10,000.

"I have three combat tours in Iraq and Kuwait," Clyde said. "I was probably never more scared in my life than when those IRS agents left my conference room on that day on April the 12th because I had no idea how to fight them."

HOW DO YOU CHANGE THE GOVERNMENT? REP.-ELECT MATT ROSENDALE, PLAYING LONG GAME, SAYS 'ONE BITE AT A TIME'

Even though Clyde had done nothing illegal and was just depositing cash on a regular basis, the IRS wasn't willing to give the money back. The agency offered to return $600,000 if he forfeited the rest, Clyde said. He refused, calling the settlement offer extortion.

"I took them to court. And I beat them in court because they were wrong," Clyde said.

Five months later, when he finally got his money back, Clyde turned into a crusader. He set out to change the law so that the IRS could never confiscate legally earned money again through civil asset forfeiture.

WASHINGTON, DC - NOVEMBER 13: Congressman-elect Andrew Clyde (R-GA) and other Representatives-elect arrive at the U.S. Capitol on November 13, 2020 in Washington, DC. Newly elected members of the House of Representatives are attending orientation at the U.S. Capitol today following the 2020 elections. (Photo by Samuel Corum/Getty Images) (Getty Images)

He traveled to Washington, worked with members of Congress and testified before a House committee in 2015 about his ordeal.

Although his story resonated and the legislation had broad bipartisan support, it took six years and lots of legwork to get something passed.

In 2019, the House and Senate unanimously passed legislation to prohibit the IRS from carrying out seizures relating to a structuring transaction unless the property seized derived from an illegal source, or if the funds were structured for the purpose of concealing criminal activity.

On July 1, 2019, Trump signed into law the Clyde-Hirsch-Sowers RESPECT Act as part of the broader Taxpayer First Act. It was named for Clyde and two others who testified in the House against the IRS.

"That was an absolute crowning moment for me," Clyde said.

Now he aims to fight just as hard on behalf of his Georgia constituents.