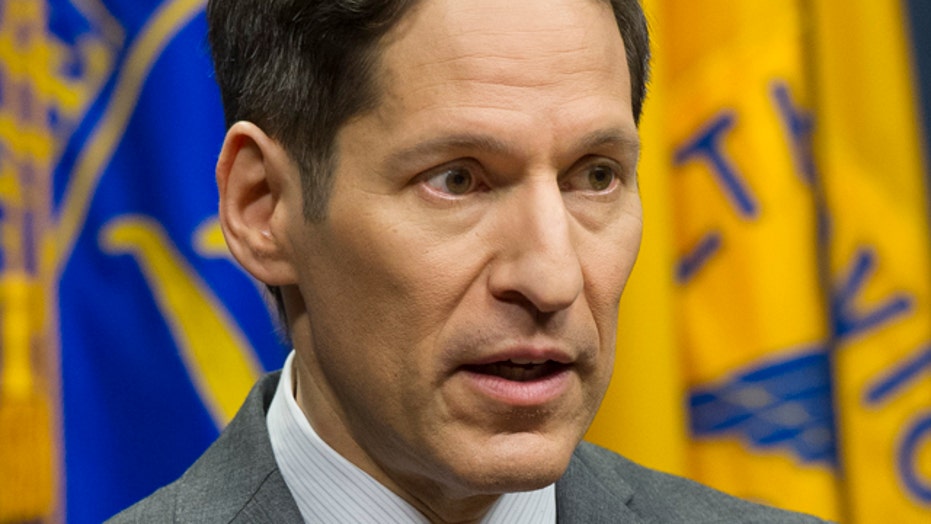 CDC director to face off with lawmakers over Ebola response

A Republican lawmaker claims the real reason the Obama administration is opposing a travel ban for Ebola-stricken African countries is that U.S. officials are concerned about hurting their economies -- a dollars-and-cents reason, the lawmaker says, doesn't make much sense.

Rep. Tim Murphy, R-Pa., whose House subcommittee held a high-profile hearing Thursday on the Ebola virus, told Fox News that Centers for Disease Control and Prevention Director Tom Frieden is the one who gave him that explanation.

"He explained to me ... the concern was that these are fledgling democracies and if we put a travel ban that that may affect their economy and harm them," Murphy said.

Murphy reiterated the concerns at Thursday's hearing, charging that public health policies may be "based upon a stated concern with cutting commercial ties with fledgling democracies rather than protecting public health in the United States."

Urging a travel ban, he said: "We do not have to leave the door open to all travel to and from hot-zones in Western Africa while Ebola ... is an unwelcome and dangerous stowaway."

The CDC's alleged explanation to Murphy about African economies would seem to conflict with what Frieden and other top health officials have said publicly about the prospect of a travel ban, which they oppose. They frequently say that halting flights would hurt the flow of medical supplies and personnel in the region -- and in turn put West Africa more at risk.

"Do no harm," Frieden told Fox News on Tuesday, when pressed on the calls for a travel ban. "If we do things that are going to make it harder to stop the epidemic there, it's going to spread."

When asked whether the government could simply rely on charter flights to send medical supplies, Frieden claimed "charter flights don't do the same thing commercial airliners do."

Murphy, though, claims that supply flights could still go in and out even if a travel ban for other flights were imposed.

Murphy's House subcommittee hosted Frieden and other top officials on Thursday. At the hearing, Frieden stressed that the CDC knows "how to control Ebola," using "tried and true measures."

He said the government will "consider any options" to protect Americans but continued to argue against a travel ban. Confronted by Murphy over his apparent desire to "protect fledgling democracies," Frieden said: "My sole concern is to protect Americans."

Dr. Anthony Fauci, director of the National Institute of Allergy and Infectious Diseases, also testified and confirmed that the first nurse to test positive for Ebola in Texas is being flown to the NIH facility in Bethesda, Md.

Meanwhile, Dr. Daniel Varga, the chief clinical officer and senior vice president for Texas Health Resources, said he is "deeply sorry" that "mistakes" were made at the Texas facility, and vowed to determine how the errors occurred.

Varga apologized at the hearing for how the hospital handled the treatment of Thomas Eric Duncan, a Liberian national who became the first person diagnosed with Ebola in the U.S. He died Oct. 8.

"Unfortunately, in our initial treatment of Mr. Duncan, despite our best intentions and a highly skilled medical team, we made mistakes," he said. "We did not correctly diagnose his symptoms as those of Ebola. And we are deeply sorry."

Varga also mentioned the two nurses, both of whom contracted the deadly virus after caring for Duncan. He says the team is "hopeful" about the progress of Nina Pham, the first nurse diagnosed, and also mentions the second patient.

"A lot is being said about what may or may not have occurred to cause Nina and Amber to contract Ebola," he said. "We know that they are both extremely skilled nurses, and were using full protective measures under the CDC protocols, so we don't yet know precisely how or when they were infected. But it's clear there was an exposure somewhere, sometime. And we are poring over records and observations, and doing all we can to find the answers."

Varga says the hospital system is also conducting further training sessions with its staff and communicating and collaborating with federal, state and local agencies.