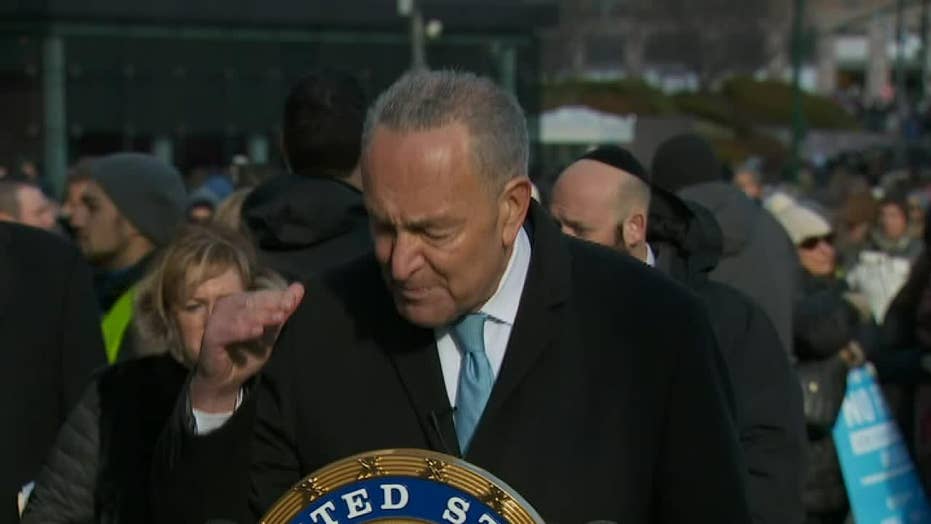 Chuck Schumer speaks at march against anti-Semitism in NYC

This comes following multiple attacks against the Jewish community.

Elected officials and interfaith leaders joined together with New York residents Sunday to march in solidarity with the local Jewish community following a series of recent incidents against Jews that have plagued the area.

Senate Minority Leader Chuck Schumer and Cardinal Timothy Dolan were among those who walked alongside an estimated 25,000 who gathered in Manhattan’s Foley Square and marched across the Brooklyn Bridge in opposition to anti-Semitism.

90,000 JEWS GATHER IN CELEBRATION OF TALMUD AFTER ANTI-SEMITIC ATTACKS: 'WE WILL NOT BE INTIMIDATED'

“Anti-semitism, bigotry is now a national crisis,” Schumer declared before the march began. The Senate Minority Leader recalled how members of his own family -- including a 3-month-old child -- were gunned down by Nazis in Ukraine in 1941.

Schumer said he intends to introduce a bill that would provide $360 million for houses of worship of different faiths. The needs include cameras, gates, strong doors, hired security.

“Hateful people have aimed at houses of worship,” he said, referring not only to attacks against Jews but the deadly shooting at a Texas church a week earlier. “They need to be protected.”

The event, organized by UJA-Federation of New York, featured participants marching while holding signs emblazoned with slogans such as “Anti-Semitism = Anti-Human” and “No hate. No fear.” It concluded with a rally in Brooklyn’s Cadman Plaza featuring a musical performance by Jewish reggae star Matisyahu.

Schumer’s fellow New York senator, Democrat Kirsten Gillibrand, and Gov. Andrew Cuomo were also in attendance. Cuomo, who traveled to the town of Monsey after the neighborhood was rocked by stabbings at a local rabbis home in December, stated that he intends to push for increased police on a hate crimes task force, an additional $45 million for non-public religious schools to use for security, and statewide education to promote diversity.

The governor also expressed pride in the local population for coming together in the face of tragedy and bigotry. Cuomo claimed that the show of solidarity was “New York at her best.”