The messages were transmitted to lawmakers three months after Justice Department Inspector General Michael E. Horowitz announced that his office had recovered communications between Strzok and Page over the period between Dec. 14, 2016 and May 17, 2017.

One source told Fox News that approximately 50 pages of texts were provided to lawmakers. The source added that the messages were incomplete, garbled and in some cases incomprehensible because characters were substituted for letters.

Rep. Meadows urges a probe of the texts between Strzok, Page

On 'Fox & Friends,' Republican congressman from North Carolina calls on the Justice Department to hand over documents showing coordination with the FBI in the Clinton probe.

The messages previously had been thought lost, creating a storm of controversy among Republicans, who noted that the missing texts covered a crucial period in the FBI's Russia investigation.

In one cryptic exchange, a source told Fox News, Strzok and Page traded messages about Comey saying that he had no legal exposure. The conversation included a reference to the Lawfare blog, which is managed by Benjamin Wittes, a Comey friend.

In January, U.S. officials told Fox News that the inspector general's office had recovered the messages by taking possession of "at least four" phones belonging to Strzok and Page.

Republicans have seized on the texts to claim that some top officials at the FBI are biased against the president. 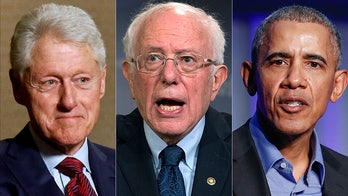