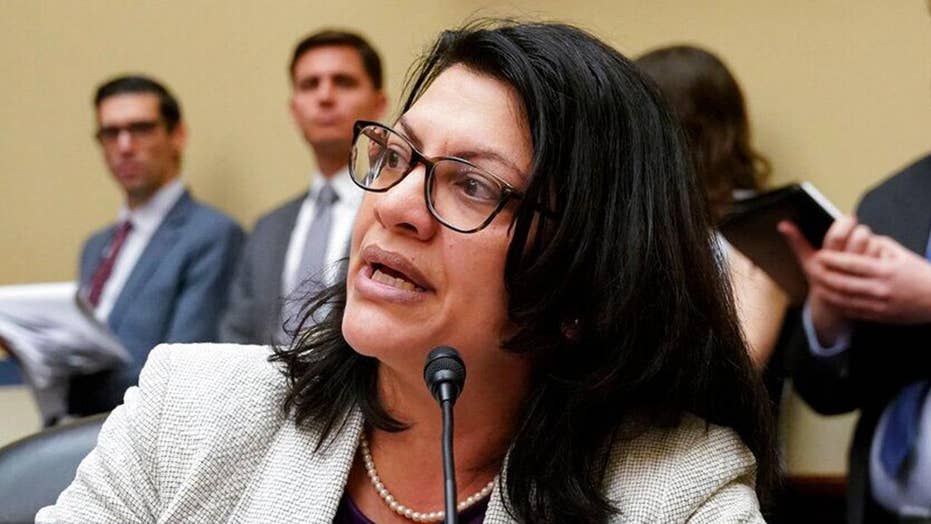 House Republican leaders are calling on Speaker Pelosi to 'take action' against Democrat Rep. Rashida Tlaib for saying that thinking about the Holocaust gives her a 'calming feeling'; Peter Doocy has the details from Washington.

House Republican leaders called on House Speaker Nancy Pelosi, D-Calif., to "take action" against Rep. Rashida Tlaib, D-Mich., Sunday after Tlaib said that thinking about the Holocaust gave her "kind of a calming feeling" in part because in its aftermath, the Palestinians helped create "a safe haven for Jews."

Tlaib, the first Palestinian-American woman to be elected to Congress, made the comments while discussing the conflict between Israel and the Palestinians during an appearance on the Yahoo News podcast "Skullduggery."

"There’s always kind of a calming feeling, I tell folks, when I think of the Holocaust, and the tragedy of the Holocaust, and the fact that it was my ancestors — Palestinians — who lost their land and some lost their lives, their livelihood, their human dignity, their existence in many ways, have been wiped out, and some people's passports," Tlaib said on the podcast's most recent episode, published Friday. "And, just all of it was in the name of trying to create a safe haven for Jews, post-the Holocaust, post-the tragedy and the horrific persecution of Jews across the world at that time. And, I love the fact that it was my ancestors that provided that, right, in many ways, but they did it in a way that took their human dignity away and it was forced on them."

Many Jewish refugees migrated to areas now considered parts of the Palestinian territories after the Holocaust, although historians have pointed out that modern migration to the region had started decades earlier.

"There is no justification for the twisted and disgusting comments made by Rashida Tlaib just days after the annual Day of Holocaust Remembrance," House Minority Whip Steve Scalise, R-La., said in a statement. "More than six million Jews were murdered during the Holocaust; there is nothing 'calming' about that fact.

"Unfortunately, this is far from the first display of heinous anti-Semitic comments coming from Democrat House members this year, and it’s clear this is now the norm for their caucus," Scalise added. "It’s long past time for Speaker Pelosi to take swift action and make it clear that these vile comments have no place in Congress."

"All of us, regardless of party, must stand as Americans against the evil of anti-Semitism," added Cheney, the third-ranking Republican member of the House. "If the Democratic leadership continues to stand by in silence, they are enabling the spread of evil. History teaches us that anti-Semitism begins with words and becomes something far worse. Speaker Pelosi and Leader Hoyer must act now."

Late Sunday, Tlaib tweeted: "Policing my words, twisting & turning them to ignite vile attacks on me will not work. All of you who are trying to silence me will fail miserably. I will never allow you to take my words out of context to push your racist and hateful agenda. The truth will always win."

"Once again, Republican leaders and right-wing extremists are spreading outright lies to incite hate," Tlaib spokesman Denzel McCampbell said in a statement Sunday night. "Congresswoman Liz Cheney should be ashamed of herself for using the tragedy of the Holocaust in a transparent attempt to score political points. Her behavior cheapens our public discourse and is an insult to the Jewish community and the millions of Americans who stand opposed to the hatred being spread by Donald Trump’s Republican party."

McCampbell added that Tlaib "did not in any way praise the Holocaust, nor did she say the Holocaust itself brought a calming feeling to her. In fact, she repeatedly called the Holocaust a tragedy and a horrific persecution of Jewish people. Again, this behavior by a bankrupt Republican leadership is dangerous and only increases hateful rhetoric from those who want to cause harm to oppressed people. The Republican party has reached a new low."

Tlaib, along with Rep. Ilhan Omar, D-Minn., has become a lightning rod for critics who have accused her of promoting anti-Semitic activists and rhetoric. Last month, the Zionist Organization of America called for the Democrats to expel Tlaib and pull her committee assignments over her "anti-Israel record" and her alleged association with "terrorists, anti-Semites and conspiracy theorists."