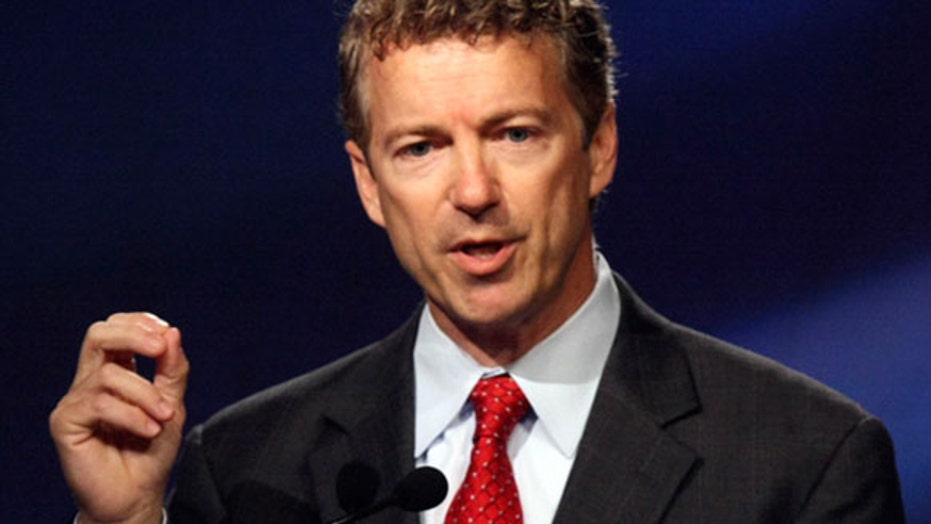 Is Rand Paul laying the groundwork for 2016?

BATON ROUGE, La. – Kentucky Sen. Rand Paul is still months away from an announcement on whether he will run for president in 2016, but there is no question he is laying the groundwork for a possible bid.

On Monday, Paul was playing political power broker in Louisiana. He was center stage at a rally where the losing Tea Party-aligned candidate Rob Maness buried the hatchet with establishment favorite GOP Rep. Bill Cassidy to present a unified front against Democratic Sen. Mary Landrieu in the Dec. 6 runoff here.

“I’m glad I could be here and do it,” Paul told Fox News. “I do want to be part of bringing [together] all facets of the party. The party doesn’t need to be smaller. The party needs to be bigger.”

Paul is the rare Republican who is able to straddle many factions of the party without alienating any one of them. He is a Tea Party favorite and speaks the language of libertarians. And while some establishment Republicans view him with either skepticism or outright disdain, the presumed new Senate Majority Leader Mitch McConnell has endorsed Paul’s potential presidential bid.

That’s a potent formula for surviving the caucuses and primaries.

Paul also has a lot of chits in the bank after the midterm elections. He traveled to more than 30 states to campaign for Republicans. Putting to bed the bitter feud between Maness and Cassidy puts a powerful coda on his exhaustive work for the party – particularly if Cassidy denies Landrieu a fourth term.

So far, the numbers look good for Cassidy. While he came second to Landrieu in the so-called “jungle primary,” the combined Republican vote theoretically gives him a 13-point advantage. Landrieu has been trying to pick off Maness supporters, but this new alliance makes the task much tougher for Landrieu.

“Just like me, one of the centerpieces of [Maness’] argument is that Senator Landrieu supports Barack Obama 97 percent of the time. He is taking our country in the wrong direction,” Cassidy told Fox News.

While the math isn’t in her favor, Landrieu is not about to go down without a fight. Her campaign just released a harsh new ad, selectively editing moments from a speech Cassidy gave to the Republican Leadership Conference in May to make him look incoherent and bumbling. Landrieu is also hammering Cassidy on his record of opposing Medicaid expansion and supporting raising the retirement age to 70.

Landrieu is making every effort to shift the Louisiana race from a referendum on Obama to recognition of her 18 years in the Senate. And while she won’t even mention the president by name at campaign events, she bristles at the notion that she is ‘distancing’ herself from Obama.

“I am trying to distinguish myself,” Landrieu told Fox News. “I have my own record. Not distance – which is your word. Distinguish.”

One of Landrieu’s main selling points on the stump is the seniority she has gained in her three terms in Washington. She is hoping people who voted for Maness will go with experience and cast their vote for her in December. Maness, who once referred to Cassidy as nothing more than a Republican version of Landrieu, is urging his supporters to take a different tack.

As the political gumbo here continues on a rolling boil, Rand Paul is carefully considering his next move. He is meeting with advisers Wednesday to weigh the pros and cons of a presidential bid.

The Kentucky senator told Fox News there are a lot of considerations – many of them about family.

“Truly it is a big, big decision for a family to make. Ah, to commit to a year-and-a-half – two years of you know, constant travel,” Paul said.

He is also worried about thrusting his family under the microscope of a presidential run, saying in today’s world of bloggers and social media, everyone and everything is game, whether fair or not.

And then there’s the issue of policy. Bill Clinton once said that in order to be president, you have to have an idea bigger than yourself. That prerequisite is a huge part of the discussions Paul is currently engaging in.

“We want to see in the spring whether any of the ideas we’re talking about will resonate,” Paul told Fox News. “Whether or not we think we have a chance at winning.”